The number of homeless people going to A&E has tripled in the last seven years, an investigation has revealed.

A 15-fold increase was noted at one hospital trust in central London, while many parts of the country have seen their numbers rocket 500 per cent or more.

Experts say the use of spice and other strong drugs, fewer preventative health services and a lack of social housing could be to blame for worsening problems. 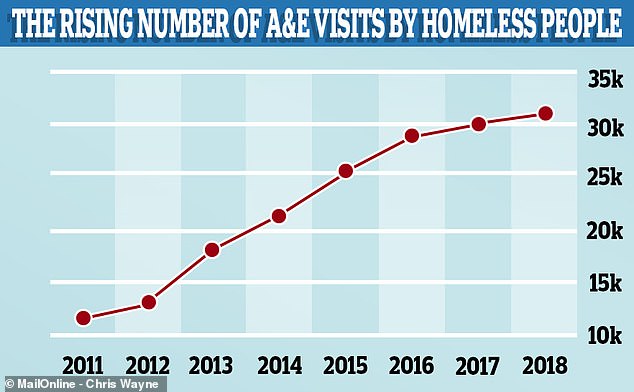 The number of homeless people visiting A&E departments in England has risen from just over 11,000 in 2011 to nearly 32,000 in 2018, figures from the British Medical Association found

The British Medical Association uncovered the figures using Freedom of Information requests to hospitals around the country.

More than a quarter of GPs also said in a survey they had seen an increase in the number of homeless patients during the past five years.

‘If this was some disease causing all these problems it would be a much higher priority,’ said the BMA’s public health medicine committee chair, Dr Peter English.

‘But because victims can be blamed and stigmatised it is easy for Government to ignore.

‘The growing numbers of rough sleepers and vulnerably housed people in our society is a continuing tragedy.

‘To stand by silently as our NHS faces increasing strain and our society becomes increasingly unequal would be unacceptable.’

London fared worst in the A&E figures, with nearly a third (9,612) of all homeless visits occuring in four hospitals there.

Barts Health Trust, which serves the centre and east of the city, had the highest number with 3,422.

While King’s College Hospital, in south London, was second worst and had the biggest increase, with admissions up 1,563 per cent.

Manchester, Bristol and Leeds also all had at least one hospital which saw 1,000 or more visits from homeless people in 2018.

And admissions onto wards, which cost an average of £400 a day, are thought to have cost more than £2million.

HOW MUCH HAVE A&E VISITS FROM HOMELESS PEOPLE INCREASED?

HOW MUCH HAVE INPATIENT STAYS FROM HOMELESS PEOPLE INCREASED?

Barts and King’s College, alongside St George’s Hospital in south-west London, also ranked worst by this measure, with more than 2,000 admissions each.

In a detailed report in industry magazine, The Doctor, experts suggest damage caused by drugs – including formerly ‘legal highs’ known as spice and mamba – could be adding to health problems among the homeless.

‘There are some incredibly extreme behaviours,’ Nottingham GP Marcus Bicknell told the magazine.

‘In recent times injecting a combination of crack and heroin called a snowball or screwball into the groin is becoming normal behaviour on the streets, which is frightening.

‘And I have a patient who chopped his earlobes off on mamba when he was psychotic.

‘You see these most bizarre psychotic behaviours unique to these drugs and our knowledge and understanding is still evolving and emerging.’

Experts also explain how Government cuts to services to help people kick addictions, get out of debt and find somewhere to live have made getting out of the spiral of homelessness more challenging.

(Reuters) – Frustrated by what they felt were misperceptions of people with disabilities, Logan Kelble…

Several years ago, a team of scientists at Lehigh University developed a predictive model to…