Ebola outbreak that has killed 319 people in the Democratic Republic of Congo will continue for at least four more months, official warns

The second deadliest Ebola outbreak in history is ‘certainly’ expected to continue for another three or four months, a health minister has said.

Deaths in the Democratic Republic of Congo have reached 319, official figures from December 17 reveal, and the spread of the virus shows no sign of slowing down.

It is feared 549 people have been struck with the virus since the outbreak was declared in August.

The spread into more major cities and across borders into other countries remains the biggest concern, with ongoing armed conflict and increased commuting expected over Christmas.

Ahead of the presidential election on Sunday, several tonnes of hand sanitiser have been deployed for use in polling stations, where millions of people will use touch-screen voting machines.

The death toll of Ebola has reached a suspected 319, including 271 confirmed, in the Democratic Republic of Congo during the second biggest outbreak in history 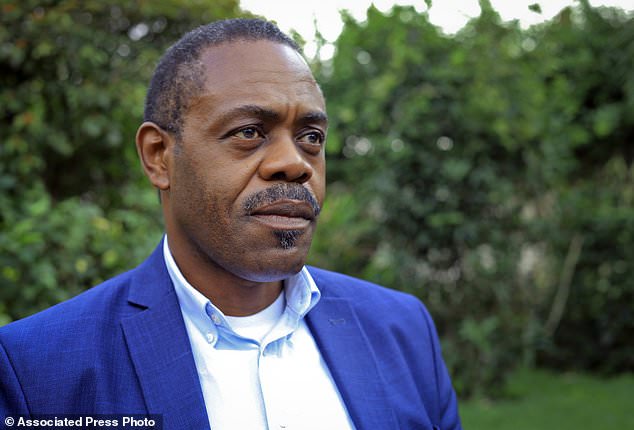 DRC’s Health Minister, Oly Ilunga, said the second-deadliest Ebola outbreak in history is ‘certainly’ expected to continue for another three or four months 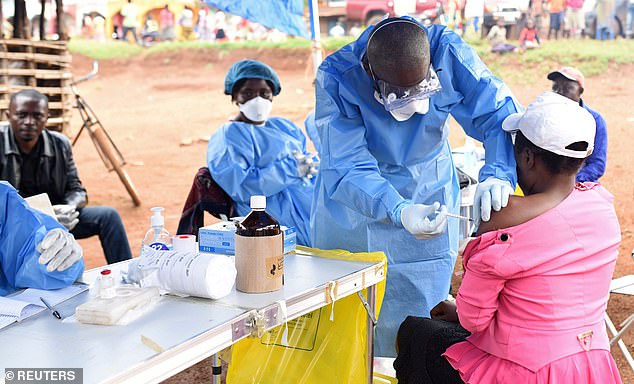 It is feared 549 people have now been struck down with the killer virus since the outbreak was declared in August. Pictured is a Congolese health worker administering an Ebola vaccine to a woman who had contact with a sufferer in North Kivu province

Health officials have struggled to contain the outbreak in one city alone, but other major cities in eastern Congo – such as Goma near the Rwanda border, and across the heavily traveled border into Uganda – are of a huge concern.

Uganda in particular is the focus of ‘intense collaboration’ – the DRC’s Health Minister, Oly Ilunga, said in an interview with The Associated Press – where cases have not yet been recorded.

This Ebola outbreak, which is mainly concentrated in the provinces North Kivu and Ituri, is the second deadliest in history, Mr Ilunga said.

Travels during the Christmas period may cause the Ebola outbreak to spread from the Democratic Republic of Congo to Uganda, experts fear.

Officials have warned that thousands of families will make the journey over the border to visit family and buy food during the festive period.

‘This distance keeps on reducing,’ said Samuel Kasimba, a local health official in charge of coordinating the effort to stop Ebola from entering Uganda.

‘The outbreak is moving closer to Uganda. In case it comes, God forbid, we are ready.’

The so-called ‘red zones,’ where there is a strong threat of rebel attack, makes response work almost impossible.

The response in wary places like Beni, where more than 1,000 people have been killed in rebel attacks in recent years, has at times been harsh, with some health workers attacked. 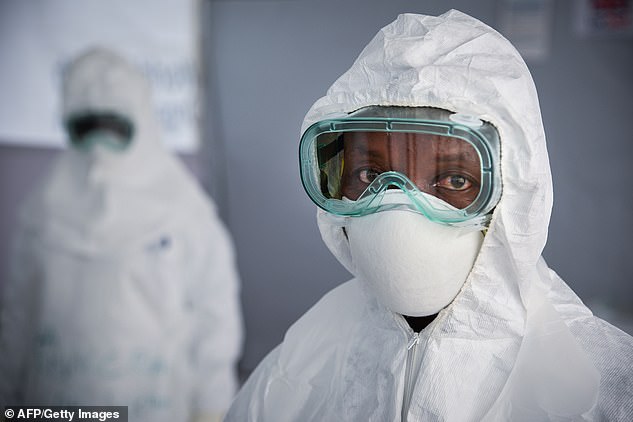 The spread into more major cities and cross borders into other countries remains the biggest concern, among ongoing armed conflict and increased commuting over Christmas 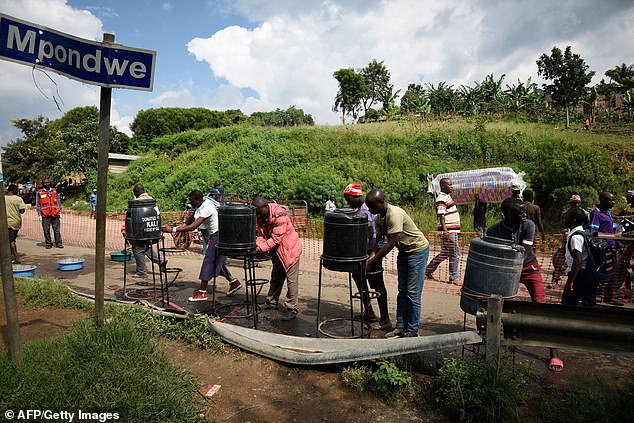 People from Democratic Republic of Congo (DRC) wash their hands at the Ebola screening point bordering with DRC in Mpondwe, western Uganda, on December 12

Armed rebels have attacked, kidnapped and killed medical staff trying to combat the outbreak and equipment has been destroyed, making it difficult to help victims.

There are still risks of confrontation every time the virus spreads into a new area, Mr Ilunga said.

But ‘we can notice today that there is an acceptance, in general, an engagement in the community,’ he said.

His words contrast that of the World Health Organization, which said last week that efforts to contain the outbreak have been challenging due to ‘non-engagement’ from locals.

The minister tried to calm the concerns of the virus – spread via infected bodily fluids – ahead of the election.

Voters are being encouraged to sanitise their hands before and after using the machines.

The treatment of Ebola itself has taken an experimental turn in DRC, where scientists are now conducting a real-time study of how well pioneering drugs work.

Four experimental drugs are being used to try and combat the disease – mAb 114, ZMapp, Remdesivir and Regeneron.

Patients will get one of the four, but researchers will not know which they were given until after the study.

Despite difficulties, progress has been made across the outbreak affected areas. In Beni, for example, there has been a general decrease in case incidence in recent weeks.

The outbreak can only be considered as ‘over’ when 60 days has passed from the date of the last known case declared.