Going to university will NOT protect you from dementia: Study debunks belief that being highly educated makes the brain more resilient against the memory-robbing disorder

Going to university and having a mentally stimulating job or hobby may do little to stave off dementia, research has found.

A study has found that it is education up to the age of 20 that is the decisive factor whether you will resist the ravages of Alzheimer’s disease.

The findings fly in the face of previous research that suggests that keeping your brain challenged throughout life gives you ‘cognitive reserve’.

This is the idea that being highly educated or carrying out very mentally challenging work that keeps your mind sharp makes the brain more resilient against dementia.

Instead, researchers say that their findings highlight how important good early years and education in the teenage years is vital to keep our brains healthy in our later life. 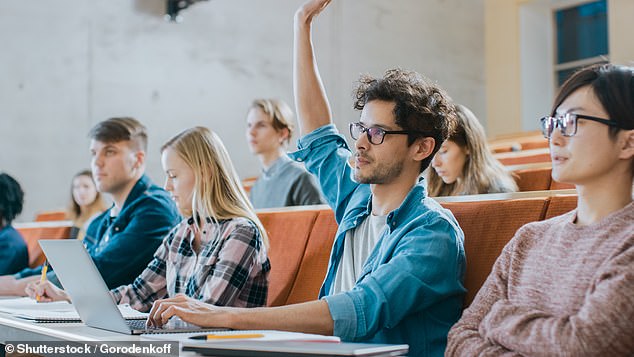 Scientists studied more than 1,000 men who served in the US military between 1965 and 1975, nearly 80 per cent of whom reported no combat exposure.

The researchers used a standard test carried out in the military called young adult general cognitive ability – in essence, an IQ test.

The brains of the ex-soldiers were reassessed at age 62.

They found that these three factors ‘accounted for less than one per cent’ of the difference between individual’s mental functioning at age 62.

But performance on the IQ test at age 20 accounted for around 40 per cent of the variation of general mental ability at 62.

And in seven areas, including speed of mental processing, verbal fluency and abstract reasoning, ability at age 20 was ten times more important.

In addition, high achievement on the test at age 20 was found be linked to a greater surface area of the brain at age 62, while jobs and later intellectual achievements were not.

The authors, from the University of California at Davis said that their findings cast doubt on previous findings that show mentally demanding jobs and having lots of degrees protect the brain.

They write ‘although previous studies have found that education improves cognitive capacity through late adolescence, the results suggest that associations between later-life cognitive function and education may reflect reverse causation – individuals with higher intellectual capacity tend to attain higher education.’

In other words, the people who attain many degrees and carry out brain-taxing jobs already had well-developed brains at the age of 20, and it is this that acts as the protective factor.

The authors add that their findings suggest that ‘improving educational quality and access much earlier in life may be important for reducing later-life cognitive decline and risk for dementia’.

WHAT IS DEMENTIA? THE KILLER DISEASE THAT ROBS SUFFERERS OF THEIR MEMORIES

Dementia is an umbrella term used to describe a range of progressive neurological disorders, that is, conditions affecting the brain.

There are many different types of dementia, of which Alzheimer’s disease is the most common.

Some people may have a combination of types of dementia.

Regardless of which type is diagnosed, each person will experience their dementia in their own unique way.

Dementia is a global concern but it is most often seen in wealthier countries, where people are likely to live into very old age.

HOW MANY PEOPLE ARE AFFECTED?

The Alzheimer’s Society reports there are more than 850,000 people living with dementia in the UK today, of which more than 500,000 have Alzheimer’s.

It is estimated that the number of people living with dementia in the UK by 2025 will rise to over 1 million.

In the US, it’s estimated there are 5.5 million Alzheimer’s sufferers. A similar percentage rise is expected in the coming years.

As a person’s age increases, so does the risk of them developing dementia.

Rates of diagnosis are improving but many people with dementia are thought to still be undiagnosed.

IS THERE A CURE?

Currently there is no cure for dementia.

But new drugs can slow down its progression and the earlier it is spotted the more effective treatments are.