Sharing her story. Dylan Dreyer suffered a miscarriage while trying to have a second baby with her husband, Brian Fichera, and is now opening up about her infertility journey.

After trying to conceive for six months, the Today show meteorologist, 37, found out she had a “very low egg count” and her uterus was “scarred shut” from delivering her son, Calvin, 2, via C-section. 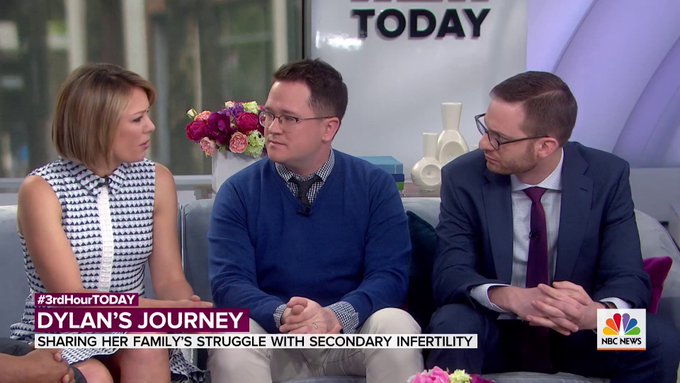 This use may include analytics, personalization, and ads.

It’s the start of National Infertility Awareness Week and @DylanDreyerNBC is sharing her own family’s struggle with secondary infertility and miscarriage to help shed the stigma. #3rdHourTODAY

“We got pregnant like that [after surgery],” the NBC personality revealed on the Today show on Monday, April 22. “Five weeks go by, I wake up to just massive bleeding, to the point where I’m standing in the shower and it just won’t stop. … I tell [Fichera], ‘I think I lost the baby,’ and the first thing he said to me is, ‘You didn’t lost the baby. … You didn’t do anything wrong.’”

While an ultrasound revealed that the baby was still there, after a few more days of bleeding, the New Jersey native miscarried.

“A part of me feels a little mad at my body for not being able to do this naturally, but that’s why we have amazing doctors and thats why I’ve got a great support system,” she admitted on Monday. “God has a plan and I pray every night, ‘Just let me stay out of your way and do what is best for us.’”

The weather anchor and her husband are now considering IVF. “We are in the middle of [this journey] now like a lot of people are,” Dreyer said. “It seemed like the right time [to speak up]. … We are hoping to get pregnant naturally, but IVF is probably our next step.”

Earlier in Monday’s episode, Jenna Bush Hager announced that she and her husband, Henry Hager, are expecting their third child. This reveal came less than a week after Hoda Kotb adopted her second baby girl.