The Government will launch a campaign to crack down on botched Botox and filler injections which NHS doctors are being left to repair.

Efforts to better protect people from treatments gone wrong will start next month, according to the Department of Health and Social Care.

The move comes as growing numbers of people are having the cosmetic procedures in attempts to get fuller lips and fewer wrinkles.

Celebrities and reality TV stars may be contributing to rising demand for cosmetic surgery but customers still have limited understanding of its risks, experts say. 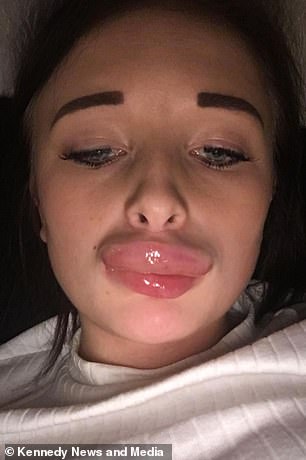 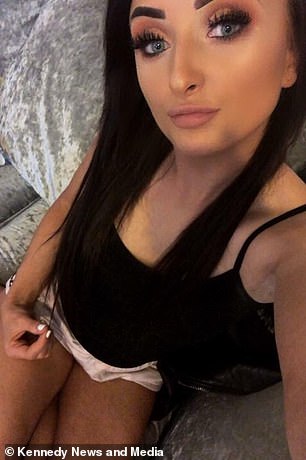 Billie Roocroft, from Greater Manchester, was left with violently swollen lips (pictured left, after and, right, when the swelling had gone) after she had a botched filler procedure. She described a ‘stinging’ pain and pain spreading to her throat and jaw

The Department of Health told the BBC’s Victoria Derbyshire Programme it will begin a campaign in May.

It will encourage people to get professional advice about Botox, fillers and other cosmetic surgery before going ahead with them.

And the government department will try to reduce the number of people ending up with botched results which need to be repaired by an NHS medic.

These can cause both physical and mental damage to the patient, and end up costing the health service money.

Women have described being left looking ‘like the Elephant Man’ after lip filler procedures went wrong, describing ‘stinging’ pain and feeling like their lips would split.

HOW DO LIP FILLERS WORK AND WHAT CAN GO WRONG?

Lip fillers are usually made of hyaluronic acid, which is a naturally occurring substance found in the skin and other bodily tissues.

It holds water in the skin, giving it extra volume and creating a cushioning effect.

When used in cosmetic procedures the liquid is injected into the skin, where it bulks up the area and also helps it to retain more water.

This immediately gives the area a fuller-looking appearance until the acid is broken down by the body and disappears.

Hyaluronic acid injections are generally safe but can cause redness, swelling, bruising, itching and tenderness at and around the site of the injection.

Side effects may affect people differently and should be discussed with a specialist before the injections are done.

If someone gets cold sores it can trigger an outbreak, and the injections may not be suitable for people who are at risk of keloid scarring – when scars become large and grow out of control.

Billie Roocroft, a 23-year-old nurse from Greater Manchester, was left with hugely swollen lips after her £120 treatment ended in disaster.

She said in December: ‘My lips swelled that big within half an hour of the beautician leaving, they looked like they were going to pop.

‘My top lip was a lot bigger while my bottom lip was touching my chin – I looked like the Elephant Man.

‘My lips were stinging and felt really sore from the stretching, I felt like crying as my neck, jaw and throat were hurting too.’

Another woman who had the same procedure, 32-year-old Lora Evans from Swansea, said she was ‘horrified’ by what happened to her.

‘[My lips were] just increasing in size hour by hour and they literally [were] starting to split.

‘I was more worried about the long-term effects of it, thinking: “Have I completely destroyed my lips out of vanity?”‘

As well as being upset by dodgy professionals, people also inject themselves with the substances – fillers are usually collagen or hyaluronic acid.

However, if injections are done wrong or with unsuitable equipment they can trigger excessive swelling or infections, which could have more serious consequences.

Save Face, a company which keeps a register of accredited practitioners, said it recieved 616 complaints about dermal fillers in 2017-18. 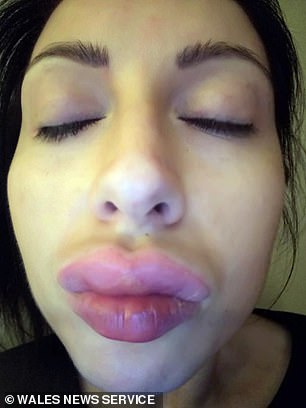 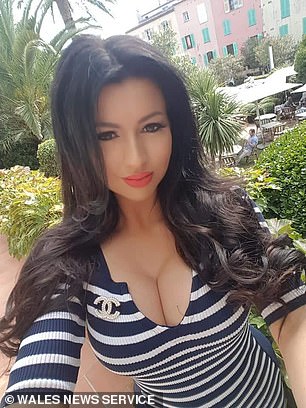 Lora, pictured, has said the industry needs to be protected to stop young people from going to unqualified practitioners.  ‘There are people doing it in beauty salons which I totally disagree with as they haven’t got the medical background,’ she said.

Some 72 per cent of these were from people who had had them in their lips, with hundreds ending in unwanted lumps and swelling.

Research into the use of Botox – which is a poison and works by shutting down nerves – found more than three-quarters of people who complained didn’t realise it is a prescription-only medicine.

And more than two thirds (68 per cent) didn’t have a face-to-face consultation with a doctor or pharmacist before going ahead with a Botox procedure.