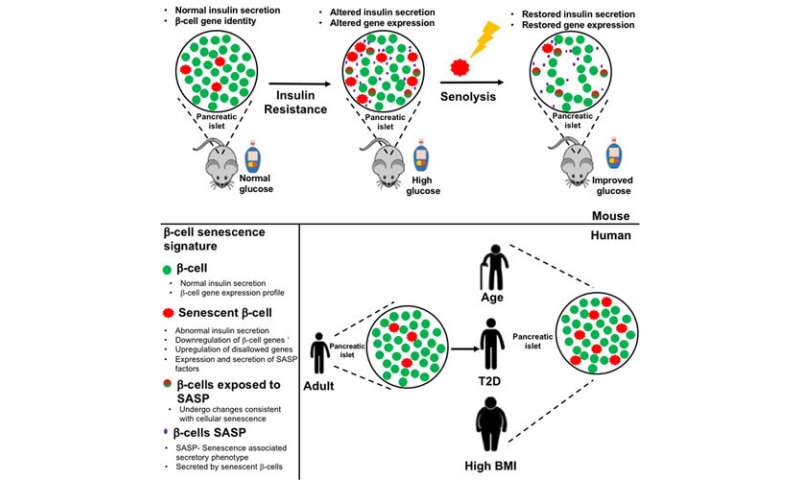 “Our hypothesis was that there was an important component in the development of diabetes which consisted of accelerated aging of beta-cells and that this population could be targeted therapeutically,” says Cristina Aguayo-Mazzucato, MD, Ph.D., Assistant Investigator in the Section on Islet Cell and Regenerative Biology, first author on the paper, recently published in Cell Metabolism.

This research falls into a broader field of the study of senescence. Senescence is the slow decline of proliferation and function of a specific cell population. These cells accumulate as organisms grow older, but certain circumstances can cause some cells in an organism to age faster than the whole.

The research team, led by Dr. Aguayo-Mazzucato, generated animal models of insulin resistance and tracked the proportion of senescent beta-cells.

“What we found is that indeed, insulin resistance was increasing the amount of senescent or old beta-cells,” she says.

Next, they deleted the aged cells through either genetic manipulation or medications that are known to remove senescent cells. The results were striking.

The ability to restore beta cell function with minimal intervention could be a game changer in the care of type 2 diabetes. For many people with the disease, beta cell function declines to the point where they need injectable insulin. Should this research be borne out in clinic trials, the implications for treatment could be huge.

“When you look at the absolute percentage or quantity of the senescent beta-cells, they rarely exceed 20 percent of the whole beta cell population and yet targeting this relatively minor population had a huge effect on function and glucose metabolism and cellular identity,” she says.

Medications to delete senescent cells , termed senolytics, are still under investigation. Dr. Aguayo-Mazzucato and her team hope to bring a potential treatment closer to the clinic by partnering with companies that are already working on senolytics, to test if their medications would work for people with diabetes.

“This opens a new target to treat diabetes which is basically to target populations of old or senescent cells that are really contributing to the local disfunction,” she says.

Senolysis, or the removal of aged or dysfunctional cells, is a growing field in the treatment of age-related diseases. This new research fits into the larger picture of how senolytics could help combat many different diseases of aging, leading to better quality of life.

“In fact, it’s a very exciting and rapidly growing field in medicine, which is called Senolytics or Senolysis,” says Dr. Aguayo-Mazzucato. “It has promises, as shown by other laboratories, in osteoarthritis, muscle frailty or degeneration, renal function, some brain function.”

While the work was completed in models of type 2 diabetes, the findings could also be relevant in type 1 diabetes.

“What we’re seeing is that senescence is, in reality, a response to stress. In the case of type two diabetes, this stress is insulin resistance. In the case of type one diabetes, it is the immune attack on beta-cells,” she says. “But in both models, beta-cells are responding to these stresses by becoming senescent. So, we think that the potential of this new vision of preventing diabetes will be valid for both type one and type two.”