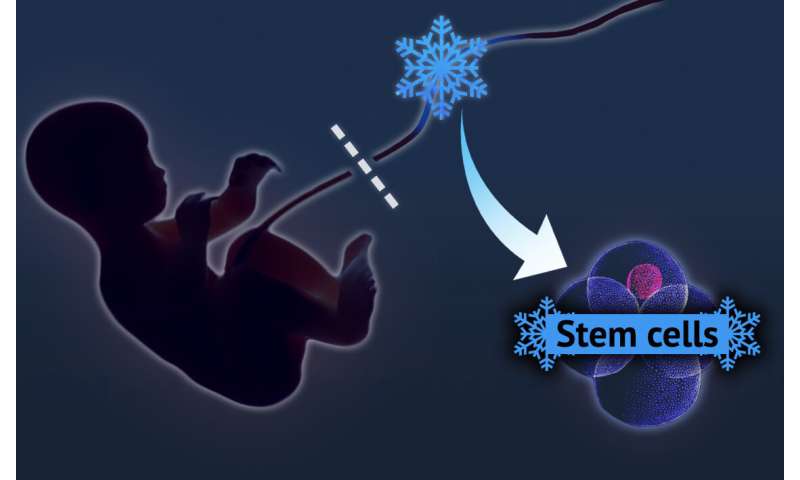 RUDN researchers have proposed freezing parts of human umbilical cord, among other things, to obtain stem cells. Unlike conserved umbilical blood, the perivascular tissue of the umbilical cord (Wharton’s jelly) is an effective and safe source of mesenchymal stem cells. An article describing the results of the work was published in Stem Cell Research & Therapy.

After a baby is born, the umbilical blood is preserved in the afterbirth and the umbilical cord. It contains hematopoietic stem cells that can be used to treat leucosis, lymphoma and complicated cases of anaemia. Within the previous decade, scientists also discovered useful properties of other umbilical cord tissues, especially the vessels of the cord and the Wharton’s jelly—mucilaginous material that fills the umbilical cord, makes it flexible, and prevents the vessels inside it from clotting. For further medical use, these tissues undergo cryoconservation, i.e. are stored in liquid nitrogen at -196℃. Cryoconservation stops all chemical processes in cells, and after they are defrosted, their biological functions restore.

“Storing umbilical blood is a popular procedure all over the world. However, besides it one may also store cells from Wharton’s jelly and the tissues of the umbilical cord itself. It is virtually a source of fetal cells, but their use is not associated with any ethical or legal issues. We suggest freezing parts of the umbilical cord tissue and then defrosting them and using to generate cell cultures,” says Timur Fatkhudinov, a co-author of the work, and a professor of the Department of Histology, Cytology, and Embryology of the Institute of Medicine, RUDN.

Researchers analyzed the results of scientific studies carried out in the past 30 years and found out that the gelatin of Wharton’s jelly can be used in two different aspects. First of all, some parts of it are a source of stem cells that can further turn into bone, cartilage, or fat cells. Such stem cells are called mesenchymal stromal cells (MSC), and the properties of MSC originating from the umbilical cord exceed even those extracted from bone marrow.

Secondly, Wharton’s jelly is used to treat cornea burns and other wounds. All extra cells are removed from it, and only the extracellular matrix is left. The matrix surrounds all cells of a tissue, keeps them in one place, and unites them into one system. It consists mainly of collagen and fibrin and also contains hyaluronic acid. Extra liquid is removed as well, and the jelly is applied to the damaged area to accelerate tissue restoration. RUDN researchers also described other umbilical cord applications that have been recorded in several recent decades. For example, fragments of umbilical cord vessels are used as prosthesis of blood vessels, to restore neural tissue, dental sack tissue, and muscles.