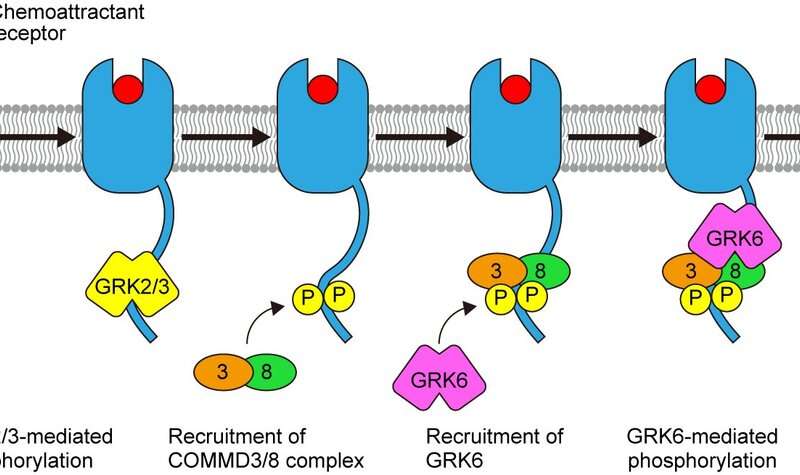 A team of researchers led by Kazuhiro Suzuki from the Immunology Frontier Research Center at Osaka University discovered the COMMD3/8 complex as a molecule involved in immune cell migration, clarifying that the complex plays a critical role in the establishment of immune responses. Their research results were published in the Journal of Experimental Medicine.

Immune cells are constantly moving around in our body. Immune cell migration, which is critically important for efficient immune responses when immune cells detect intrusion of pathogens, is also deeply involved in the development of inflammatory diseases such as autoimmune diseases. The factors in the induction of immune cell migration are chemokines and chemokine receptors. Chemokine receptors, a type of G protein-coupled receptor (GPCR), mediate signal transduction and are involved in various pathologies and conditions. A large fraction of existing drugs target various GPCRs.

While exploring the mechanism of regulating immune cell migration, this team identified a protein complex consisting of copper metabolism MURR1 domain-containing 3 (COMMD3) and COMMD8, or the COMMD3/8 complex, as an adaptor that selectively recruits a specific GPCR kinase (GRK) to chemoattractant receptors.

They found that COMMD3/8 promoted signal transduction of chemokine receptors to facilitate migration of immune cells, including lymphocytes. (Figure 1) 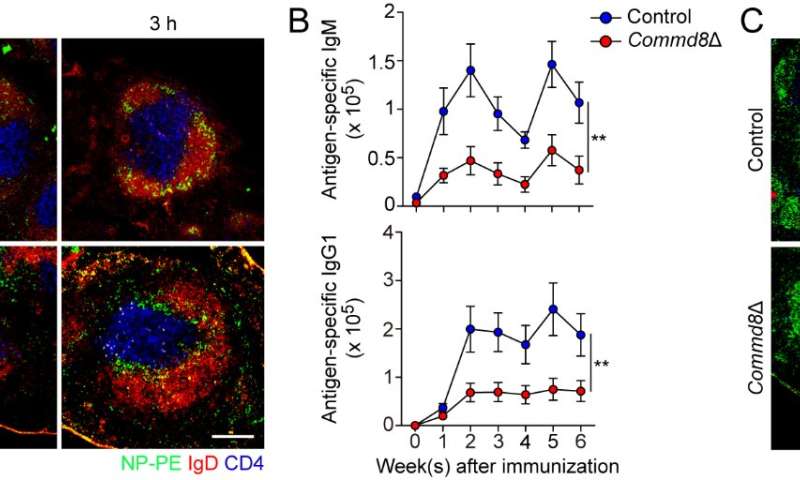 In experiments using COMMD3/8-deficient mice, impaired migration of activated B cells, also known as B lymphocytes, significantly reduced immune responses, causing severe defects in antibody response. In addition, they found that loss of the COMMD3/8 complex reduced lymphocyte migration induced by stimulation of chemokine receptors. They also found that the COMMD3/8 complex functioned as an adaptor that selectively recruits GRK6, a signal transduction molecule, to chemoattractant receptors, inducing activation of signaling of chemokine receptors. (Figure 2)

From these findings, they clarified that the COMMD3/8 complex played an essential role in lymphocyte migration and proper functioning of the immune system. In addition, they revealed that COMMD3 and COMMD8 were degraded by the proteasome in the absence of the other, and deficiency of either protein produced the same phenotypes, which indicates that both COMMD3 and COMMD8 are required for the stability and function of their complex.