Mental health challenges may be on the rise, but there are ways to buffer ourselves from them and help us manage them more effectively according to a survey by the not-for-profit, Smiling Minds.

The organisation's survey of 1200 Australians about what helped preserve their mental health against the impact of tough times found relationships, sleep, exercise, meditation and diet brought positive benefits. Thirty-four per cent named relationships as the number one factor that helped them stay positive. 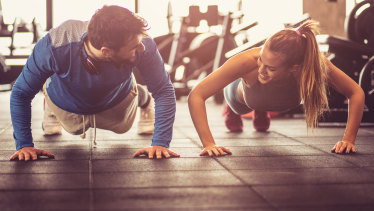 Friendships and exercise are among the most protective factors for our mental wellbeing. Credit:Getty

“We know mental illness is a big challenge for a lot of Australians so we the next step is looking at what we can be doing to look after our mental health or prevent the onset of mental illness,” says Dr Addie Wootten, a clinical psychologist and CEO of Smiling Minds.

She said while there had been much dialogue around the importance of exercise, the fact relationships or various kinds were ranked as most important was significant.

“A lot of conversation has been around how important sleep and exercise are and I think that’s because we feel we have more control over how to get a good night’s sleep and how to get the right amount of exercise. Relationships are more complex.”

She said it was not only romantic relationships found to make a positive difference, but how connected people feel to others.

“In the literature, they talk about social support. You may not even see those people every day or every week, but feeling like you have a network of people that you could turn to if you needed to seems to be the factor that really links to good mental health.”

For this reason, Wootten says that regardless of whether we are in a relationship or not, it is “really important” to consider how we build and maintain supportive, connected relationships.

“That can be through your workplace, it can be through community groups, some people endorse social connections through things like Facebook and Instagram, but it’s very individual – what[ever] helps you feel connected to other people,” Wootten says.

As well as having significant physical health implications, sleep (rated the highest by 32 per cent) is closely connected to our mental health. Chronic sleep disruption wreaks havoc in the brain, impairing thinking and emotional regulation.

Feeling like you have a network of people that you could turn to … seems to be the factor that really links to good mental health.

Similarly, exercise impacts not just our physical health, but our emotional health as it helps to regulate hormone levels, releases mood-boosting endorphins and serotonin and increases blood flow to the brain. In these ways, exercise (which 15 per cent rated as the most important factor) acts as protection against and helps to reduce symptoms of mental ill-health.

Practices such as mindfulness and meditation (rated by 9 per cent of respondents as the most important) work by building our capacity to cope with challenges.

When someone goes to the gym, it takes time to build their aerobic capability, Wootten explains. “It’s the same with mental health,” she says. “We have to learn how to build our skills so that we can manage life’s challenges. There are lots of different ways to do that.

“Mindfulness/meditation is a powerful tool to be able to be in control of your emotions, manage stress differently and build connected relationships. Other therapeutic interventions support that too – talking to a therapist and learning cognitive behavioural therapy or forming a network of people where you openly talk about your emotions can be really powerful.”

Better quality diets (which 5 per cent rated as important) are associated with reduced risk of mental ill-health and improved symptoms of depression, while diets high in processed foods are related to increased levels of depression and anxiety.

The survey found that work issues, followed by finances were the most likely factors to negatively impact subjects' mental health. Wootten attributes this to growing work insecurity and constant connectivity making it hard for people to mentally switch off.

While there are protective measures we can take, only one-third of Australians seek health when they are suffering.

The upshot, according to Wootten: “Do something! Don’t just think about mental health, think about what you’re going to do about your own mental health. We can think about thins, but it doesn’t change the way we feel. We have to put things in place to make a change and even a simple change would be really beneficial.”