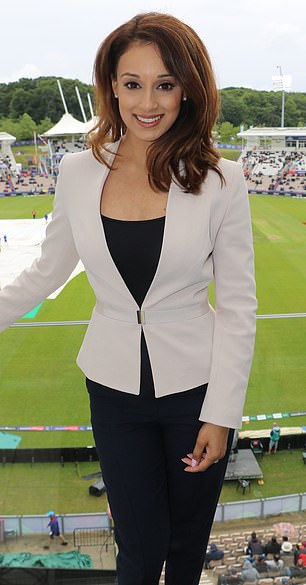 Sports presenter Seema Jaswal, 34, was struck down with a vicious form of meningitis at 16

TV and radio sports presenter Seema Jaswal has revealed she is lucky to be alive after slipping into a coma from meningitis as a teenager.

Mrs Jaswal, 34, who fronts coverage for the Premier League and is currently presenting the Cricket World Cup, was struck down with a vicious form of the infection at 16.

Despite pulling through without any lasting effects, she claims unsympathetic paramedics thought her symptoms – throwing up bile and pains in her neck – were down to her being high on drugs.

The sport-loving teenager was working part-time at a coffee shop one Saturday in April 2001, while studying for her A levels, when she was suddenly hit with a pounding headache.

Mrs Jaswal, who was part of ITV’s presenting team at the World Cup last year, got home from work and couldn’t sleep due to the excruciating pain.

In the middle of the night, the teen, from Richmond, West London, started throwing up bile and experiencing pains in her neck.

As her health deteriorated and she began to lose consciousness, her mother Raziya called an ambulance.

Mrs Jaswal – who presents Motorsport and the World Darts Championships for Channel 4 – said if it wasn’t for her mother’s quick reactions, she may have died.

She said: ‘It was only my fitness from playing sports and my mum’s quick reactions that saved me from suffering lasting brain injury or losing a limb because of the disease or, and I dread to think about it, losing my life.

‘The paramedics arrived and after taking one look at me decided I’d taken drugs.

‘They apparently dragged me to the ambulance with little sympathy for another teenager having an adverse reaction to something they’d taken. 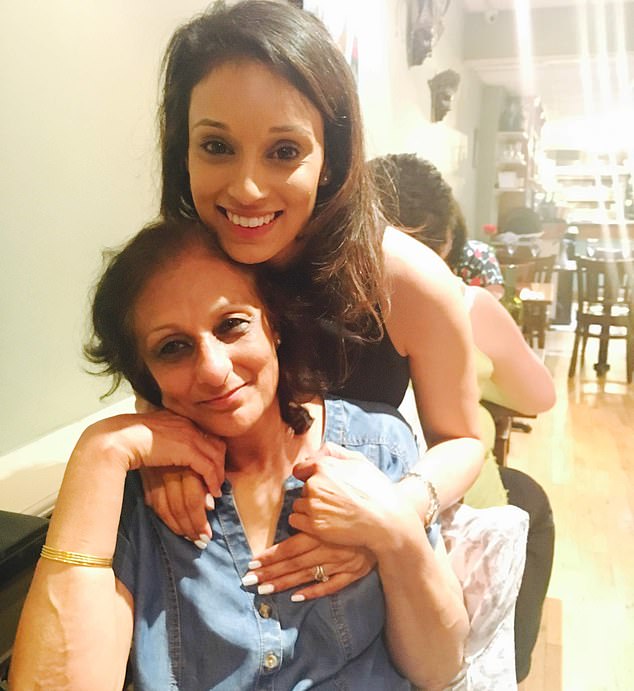 Mrs Jaswal says if it wasn’t for her mother’s quick reactions, she may have died or suffered lasting brain damage

‘I don’t wish to be critical though and this was a long time ago; I’m sure things are different now.

‘I loved to party but I loved my sports and wouldn’t ever take drugs which mum and dad knew but, still, they were scared.’

By the time Mrs Jaswal reached hospital she was in a coma. She woke up in the middle of a lumbar puncture, which she said was both frightening and painful.

During a lumbar puncture, a needle is inserted between the vertebrae to remove a sample of cerebrospinal fluid – which surrounds the brain and spinal cord to protect them from injury. 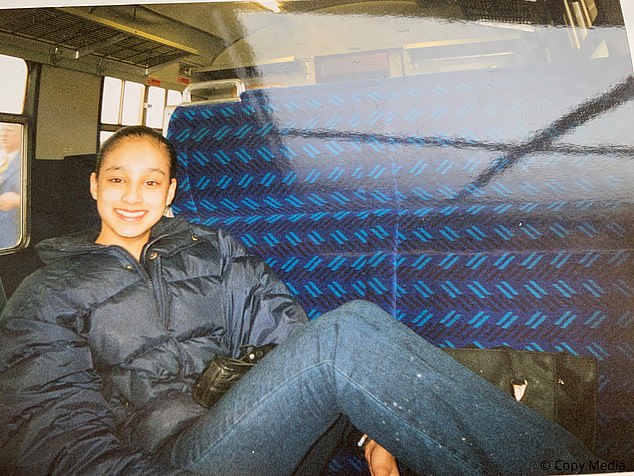 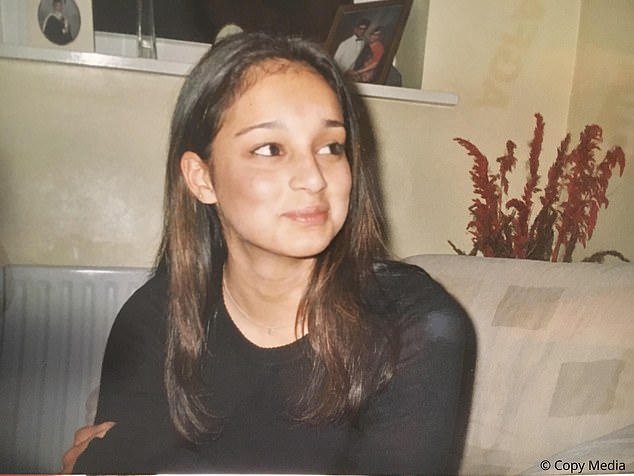 In the middle of the night she started throwing up bile and experiencing pains in her neck. Within minutes she was fading in and out of consciousness

Medics can test the fluid for meningitis and sepsis. Blood tests and a brain scan, as well as the lumbar puncture, revealed she had contracted meningitis B, which had been caught just before it had turned to septicaemia.

After the diagnosis, Mrs Jaswal’s parents were told to prepare for the worst.

The sports presenter said her mother and father still tear up when they think back to that day.

‘It was terrifying, I was so weak and drained, and I lost loads of weight, I was just bones,’ she said.

‘It took months to get back to full fitness, and the doctors told me if I wasn’t so sporty the outcome could have been very different.

‘Although there’s nothing I could have done to prevent it – there was no vaccine then – I’m extremely lucky to have not suffered lasting damage. 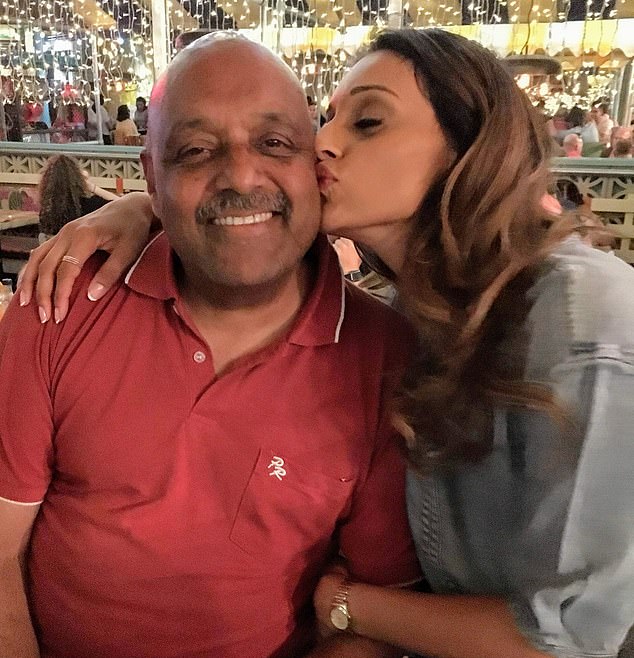 Mrs Jaswal (pictured with her father Monty) says her traumatic experience has made her value her life, career and the people she loves

‘I’d see a neighbour who was blind and walked with a limp, and found out later he’d had meningitis, a constant reminder of how fortunate I was to be fit and healthy and that mum and dad hadn’t lost their only child.’

Mrs Jaswal says her traumatic experience motivates her to warn parents and young people about the dangers of meningitis – and everything they can do to prevent it.

‘Meningitis changed me. I embrace life, I make the most of every opportunity and there are many times when I stop in busy moments and remind myself how lucky I am to be here,’ she added.

‘Meningitis made me value everything more: my life, my career and the people I love.

‘And it’s made me want to do everything I can to make sure others don’t go through what me and my parents did…because my situation could now be shockingly different.

‘It’s realising how lucky I am to have survived unscathed, and to go on to have the life and career that I have, that makes me want to raise awareness for other young people and their parents.

‘Eighteen years on, it’s with me every day and just talking about it makes my mum and dad very emotional, reducing them to tears.

‘It’s strange to think that life might have been very different or, even, that it might not have carried on at all.’

Meningitis is an infection of the meninges, the lining around the brain and spinal cord.

It can be caused by different bacteria and viruses, although bacterial infections are usually more serious.

One of the bacteria which causes meningitis is called Neisseria meningitidis, also known as the meningococcus.

This bacteria commonly lives harmlessly in people’s throats, but can cause the devastating illness if it gets into the blood or spinal fluid.

There are different types of this bacteria and the most common is known as meningitis B.

It most commonly affects children under the age of one, causing symptoms including fever, poor feeding, vomiting and lethargy.

It can also cause blood poisoning. In children over the age of four the disease is rare, but there’s a second peak of the disease in teenagers.

Babies are at high risk because they do not have immune protection from antibodies – these are passed from mothers to babies which protect them for the first few months of life, but after that they are susceptible.

They gradually build up immunity as they are exposed to similar bacteria in the environment.

Teenagers are more likely to carry the bacteria in their throats than other age groups, which is why there is this second, smaller, peak of disease in that age group.

Specialising in football, Mrs Jaswal made her first appearance on TV in 2008 doing the sports roundup on Newsround.

She then went on to enjoy a lengthy stint as co-host on Channel 5’s The Wright Stuff.

In recent years she’s covered everything from snooker to motorsport, and anchored FIFA TV’s coverage of the under-17 World Cup.

Meningitis is inflammation of the membranes that surround and protect the brain and spinal cord.

Anyone can be affected but at-risk people include those aged under five, 15-to-24 and over 45.

People exposed to passive smoking or with suppressed immune systems, such as patients undergoing chemotherapy, are also more at risk.

The most common forms of meningitis are bacterial and viral.

Symptoms for both include:

Headache is one of the main symptoms

Some 10 per cent of bacterial cases are fatal.

Of those who survive, one in three suffer complications, including brain damage and hearing loss.

Limb amputation is a potential side effect if septicaemia (blood poisoning) occurs.

Vaccines are available against certain strains of bacteria that cause meningitis, such as tuberculosis.

Viral is rarely life-threatening but can cause long-lasting effects, such as headaches, fatigue and memory problems.

Thousands of people suffer from viral meningitis every year in the UK.

Although ineffective, antibiotics may be given when patients arrive at hospital just in case they are suffering from the bacterial form of the disease.