A woman stung by a stingray in Peru had to live in agony for nine months before surgeons finally removed the last pieces of the animal.

The British holidaymaker, who was in her early 20s, described the experience as ‘the most intense pain I’ve ever experienced’.

She had stood on the fish while travelling and it attacked and stabbed her in the left foot with its barbed tail, causing her to bleed ‘profusely’.

Local people loaded her onto a rickshaw and rushed her to a ‘disorganised’ and ‘horrible’ hospital where she was treated, but the pain didn’t go away.

Months of trying to find out why her foot was still hurting after she returned home to England ended only when surgeons opened up her foot and found part of the fish’s tail was still inside her and had triggered an infection. 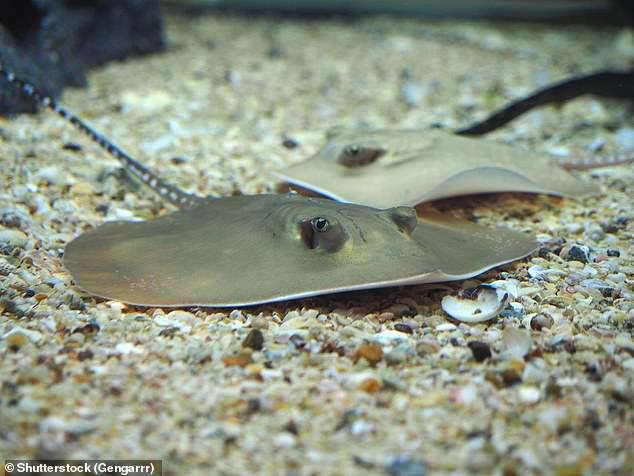 Stingrays only usually attack people when their lives are in danger, according to the doctors, and it is rare for the venom from their tail to be deadly (stock image)

The unnamed tourist, who is believed to be from near Bristol, suffered from weakness, vomiting, diarrhoea and cramps in the days after she was stung.

She at first put this down to coincidental food poisoning, but doctors later realised it was poisoning from the stingray.

Although she wasn’t able to stand on her foot and couldn’t wear shoes, the woman decided not to seek more medical help while she was in South America.

She said: ‘Being attacked by a stingray was the most intense pain I’ve ever experienced.

‘When I emerged from the water with a foot that was heavily bleeding the local Peruvians were alarmed and there was a great deal of commotion with everyone shouting.

‘I was rushed to hospital by rickshaw where my main concern was making sure that all the needles being used on me were clean and newly opened.

‘The hospital was disorganised and horrible. I was keen to leave although I did not feel much better.

‘For the remainder of my time in South America my foot was very swollen and painful. I couldn’t wear trainers or other shoes and had to go around in flip-flops.’

WHAT SHOULD YOU DO IF YOU GET STUNG BY A STINGRAY?

Stingrays are flat, dark-coloured fish which usually only attack people if they are in fear of their lives.

The fish may stab at someone with its long, barbed tail which may be more than a foot long.

The barbs contain venom which, although rarely deadly, can cause severe pain and swelling. The effects of the venom vary depending on which of the approximately 150 species of stingray the attacker is.

Doctors say quick first aid is crucial to minimising the pain and effects of the sting.

The wound should be thoroughly washed with fresh or sea water as soon as possible in a bid to try and clean out some of the venom.

The affected area should then be immersed in hot water for at least half an hour. Stingray venom cannot withstand heat very well and a temperature of around 45°C (113°F) should be high enough to ‘significantly reduce pain’.

Elevating the affected limb may also help to reduce the swelling of the wound.

Although it may not be an emergency, the patient should be taken to hospital so doctors can make sure there are no fragments of the fish left behind or other debris which may cause infection.

Her wound never healed properly and, she described ‘a lot of oozing fluid and pus’, which continued when she returned home to England.

Doctors tried prescribing antibiotics and did various scans but nothing could explain the ongoing agony, they said in the medical journal BMJ Case Reports.

They even considered diagnosing her with complex regional pain syndrome, a poorly understood and painful nerve condition.

But surgeons eventually decided to operate and look inside her foot, where they found lumps which looked like ‘black pepper’ – parts of the stingray’s tail.

Stingrays tails are barbed and when these penetrate the flesh of a creature it has attacked, a membrane breaks and releases venom into the body.

Although it’s rare for the venom to be deadly, it can cause fever-like symptoms and vomiting, and may lead to more serious conditions such as blood poisoning.

Steve Irwin, the Australian crocodile hunter, was famously killed by a stingray but this was because he bled to death after the fish’s tail pierced his heart, not because he was poisoned.

Once the parts of the stingray were removed from the woman’s foot she recovered, suffering only minor nerve damage to a few toes, and was able to run a half-marathon 18 months later.

The doctors, led by Dr Philip Delbridge at a hospital trust in Swindon, said: ‘The common stingray can be found in UK waters, and there have been stingray strikes within the UK reported in the media.

‘Despite this, there are currently no UK-based guidelines for the management of these injuries.’

‘In this case, fragments of the integumentary sheath and barb remained in the patient’s foot for a remarkable 9 months, resulting in a non-healing wound with persistent inflammation and infection,’ they added.

‘Surgical exploration and [tissue removal] may be indicated in any such case of complicated stingray injury.’

The woman added: ‘After the surgery I soon realised my foot was beginning to return to normal. It was such a relief. Nowadays I am basically back to normal.

‘I cannot wiggle a few of my smaller toes on my left foot very well and I have a numb patch over the little toe but none of this bothers me.’