Woman, 29, forgot her own wedding day and thought the year was 1860 after a rare condition caused her brain to SWELL and wiped her memory

A woman has told how she forgot her wedding day and thought the year was 1860 after a rare condition made her brain swell.

Vickie Harkness, 29, of Carlisle, Cumbria, couldn’t remember who she was or how to do basic tasks such as brush her teeth or tie her shoelaces.

Her problems began in March 2016 with flu-like symptoms and a week of seizures – the first of which left her convinced she had just ‘been to the moon’.

Tests showed she had encephalitis, a life-threatening condition often caused by a viral infection, and she was hospitalised for three months.

Her family were told to prepare to say their goodbyes when she was placed in a temporary induced coma to relieve pressure on her organs.

When Mrs Harkness, an outdoors activity instructor, woke up, she felt like a ‘zombie’ and an empty shell of her former self.

She has since regained 80 per cent of her memory. But she still cannot remember her wedding day to her partner of eight years, Shona Harkness, 30, in 2015. 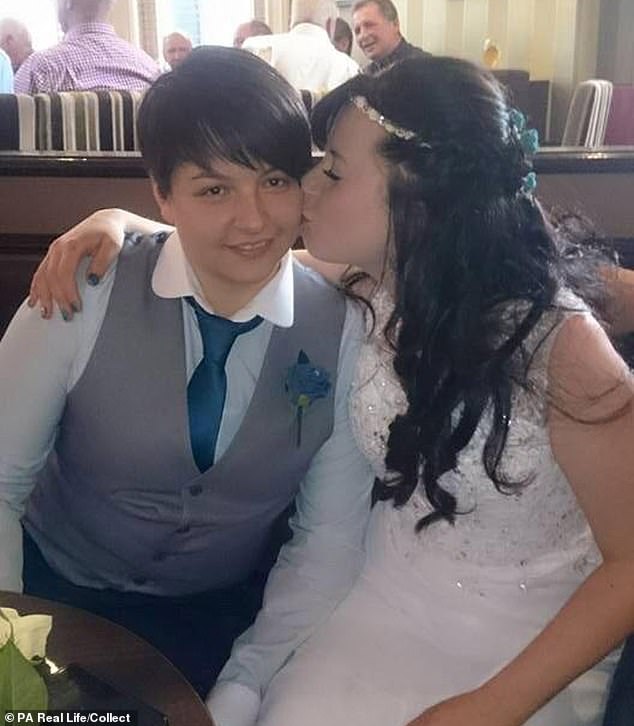 Vickie Harkness, 29, of Carlisle, Cumbria, couldn’t remember her wedding day to her partner of eight years, Shona Harkness, 30, in 2015 (pictured), after she was struck with a rare condition which caused her brain to swell, wiping her memory 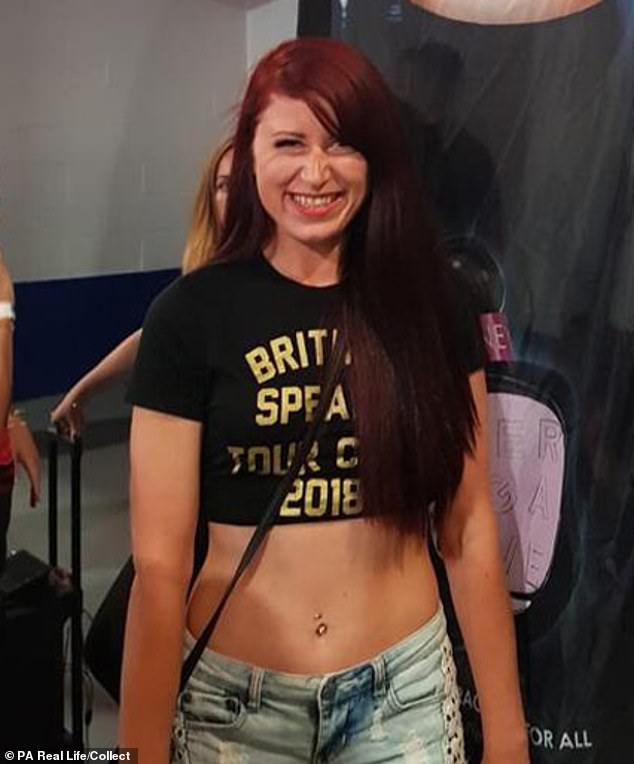 Mrs Harkness’ problems began in March 2016 with flu-like symptoms and a week of seizures – the first of which left her convinced she had just ‘been to the moon’. Pictured after recovering 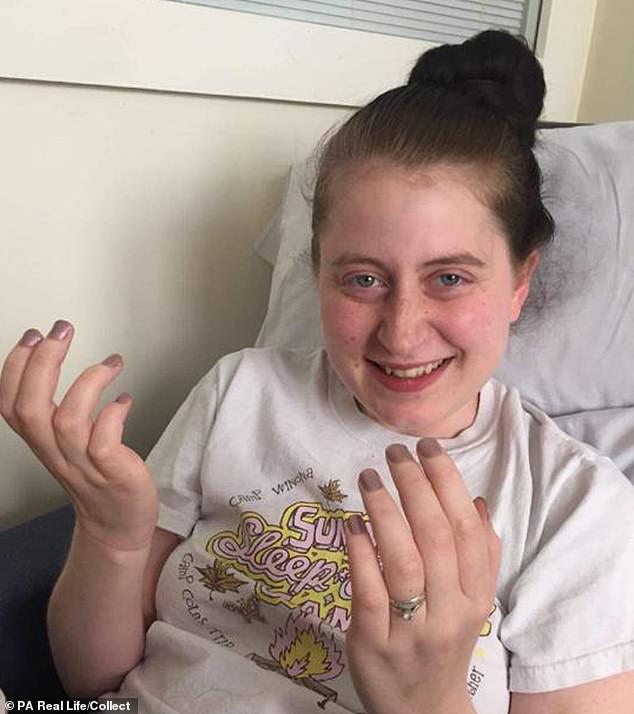 Mrs Harkness, who claims she had been a fit and healthy person until March 2016, said: ‘It’s so sad.

‘My friend showed me a photo – a picture of my bridesmaids and Shona’s best men – and I feel like I am starting to remember. I’m determined it will come back to me.’

Speaking of the time she developed symptoms, Mrs Harkness said: ‘It started with fatigue and I thought I was getting the flu.

‘But Shona thought I might have been depressed as I stopped laughing. Normally I find everything funny, but I stopped. It was like I couldn’t think for myself.

Encephalitis is an uncommon but serious condition in which the brain becomes inflamed.

It can be life-threatening because when the brain swells it pushes downwards onto the brainstem. The brainstem is the part of the brain that controls the vital functions of breathing and circulation.

Anyone can be affected, but the very young and very old are most at risk.

Encephalitis sometimes starts off with flu-like symptoms, such as a high temperature and headache, but these don’t always occur.

More serious symptoms develop over hours, days or weeks, which include confusion or disorientation, seizures, changes in personality and behaviour or loss of consciousness.

It’s not always clear what causes encephalitis, but it can be caused by viral infections.

Several common viruses can spread to the brain and cause encephalitis in rare cases, including the herpes simplex virus – which causes cold sores and genital herpes – and the chickenpox virus.

‘Shona would tell me where she was going, but ten minutes later I’d phone her and ask her, “Where are you going?” I just started responding less and less.’

Mrs Harkness then suffered seizures the next week, the cause of which stumped medical professionals.

Mrs Harkness said: ‘Apparently, after I had my first seizure, I came round and Shona asked me what happened. I said, “I’ve just been to the moon”. I genuinely believed I’d been there.’

Mrs Harkness was admitted to Cumberland Infirmary in Carlisle where doctors performed a lumber puncture – when a large needle is used to extract fluid from the spine for testing.

It came back positive for encephalitis and Mrs Harkness was transferred to Newcastle Royal Victoria Infirmary.

Encephalitis is inflammation of the brain caused either by an infection or through the immune system attacking the organ.

Mrs Harkness said: ‘They don’t know what caused it – just that my body was producing too many white blood cells. I think I got it from flu and my body was trying to fight it.’

Soon after being admitted to hospital, things took a turn for the worse and Mrs Harkness’ organs started to shut down.

When the brain is swollen it pushes down onto the brainstem, which controls vital functions such as breathing and circulation. Pressure on the brainstem can cause it to stop functioning.

Doctors were forced to put Mrs Harkness in an induced coma for a week to allow her brain to recover from the swelling.

There are different  types of encephalitis, some of which are so severe they kill between 10-30 per cent of patients, The Encephalitis Society says. 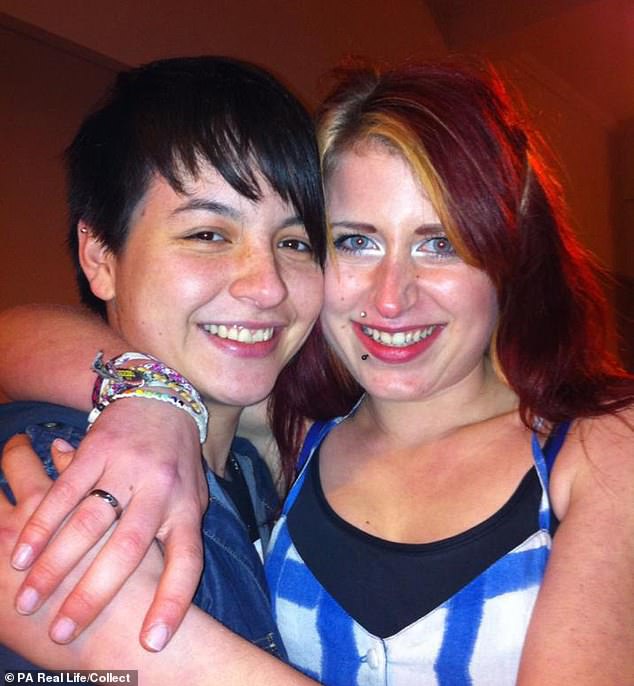 Mrs Harkness’ family, including partner, Shona (pictured) were told to prepare to say their goodbyes when she was placed in a temporary induced coma to save her life 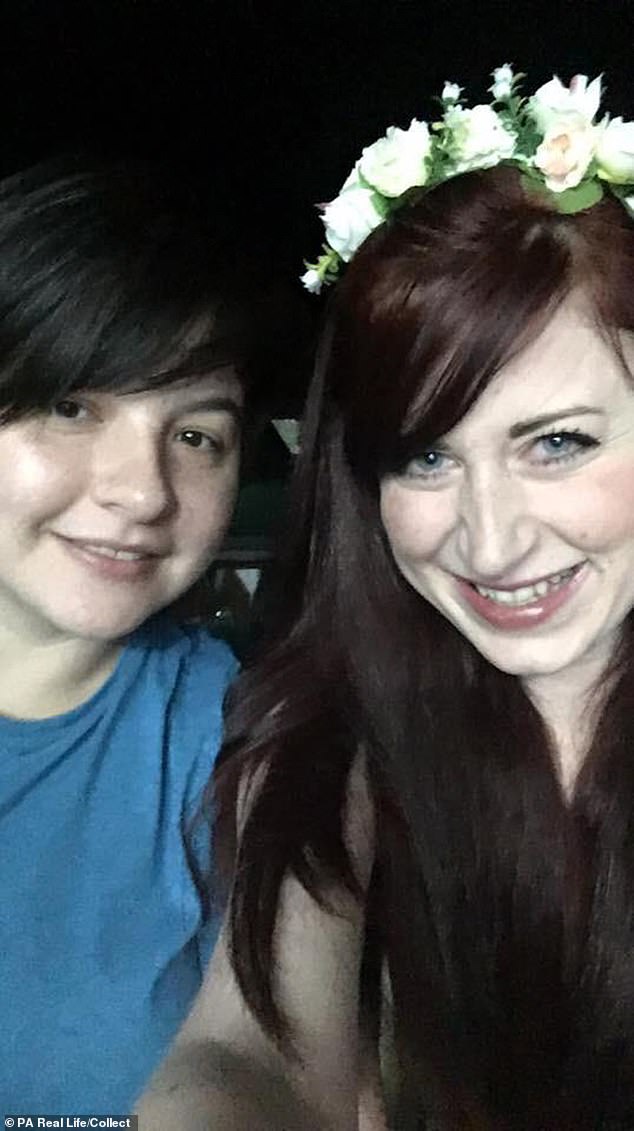 When Mrs Harkness woke from the coma, she had no short or long term memory. She felt like a ‘zombie’ and ’empty’. Pictured with her partner

Mrs Harkness’ family and friends were told to prepare for the worst, being warned she could be left severely disabled and ‘probably wouldn’t be the same person’.

Nerve cells – neurons – may be destroyed, causing brain damage and long-term effects such as mood swings, tiredness and speech and co-orindation problems.

When Mrs Harkness woke up, her short- and long-term memory had disappeared and she needed round-the-clock care.

Mrs Harkness said: ‘At first, I couldn’t speak. It was like I’d turned into a zombie and Shona was told I’d probably need to go into a care home.

‘It was so strange, because I knew when people were my friends and family, because of feeling something for them – but I didn’t actually know exactly who they were. I knew I loved Shona, even though I didn’t know who she was.

‘I couldn’t control my body anymore, so had to use a catheter, and I would say strange things. The doctors asked me what year it was and I said 1860.’

After three months – with a promise from Shona and their friends that they would provide full-time care – Mrs Harkness was allowed to go home from hospital.

She said: ‘I was a really independent person and not being able to do anything for myself was awful.

‘I had to keep a diary of what I’d done the day before. I would read it and realise I couldn’t remember what I’d done yesterday. That was such a weird feeling.

‘I couldn’t remember anything from my childhood. It was like my memory had been erased. I used to play guitar and write little songs, but I couldn’t do that anymore.

‘I’d forgotten how to do the things that made me myself. The feeling is indescribable and I was embarrassed that I’d forgotten this stuff.’ 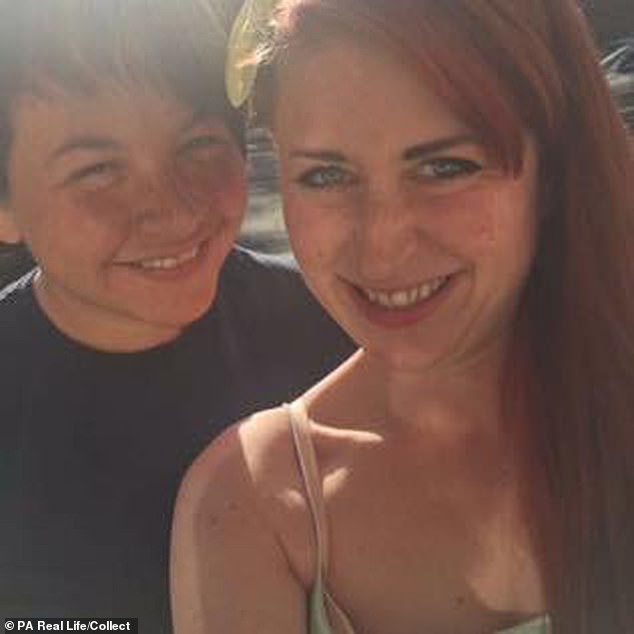 Mrs Harkness was discharged from hospital on the basis that her partner (pictured left) would care for her full time while she recovered. During this time she was unable to do anything independently, even forgetting what it meant to be hungry 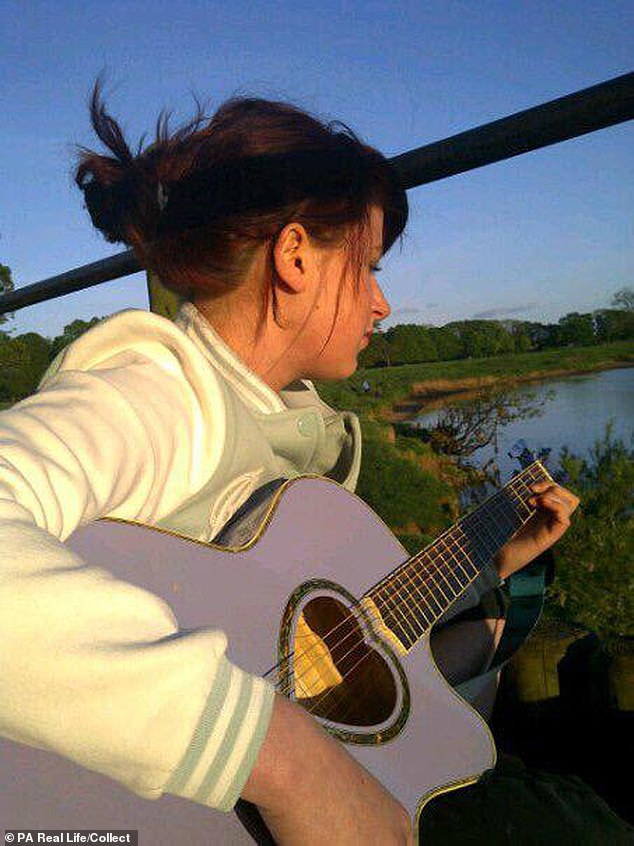 Memories started to return, but they were disordered. Mrs Harkness was determined to rebuild her personality by learning how to play the guitar again (pictured)

A turning point in Mrs Harkness’ recovery came in October 2016.

She said: ‘I decided then that I had to train my brain. I would use my sat nav to get to places and gradually do it on my own, relearning all the things I’d forgotten.

‘I had to relearn how to tie my shoelaces and brush my teeth. I couldn’t feel hungry. I ate when I was told to.

‘It’s thinking for yourself and figuring out what you need and want, which people take for granted every day. Not knowing what you want is terrifying.’

Memories started to return, but they were disordered. For example, Mrs Harkness had flashbacks of dance routines she learned at college.

Determined to rebuild her personality, Mrs Harkness picked up the guitar to learn how to play again.

She decided to try figure skating because it was something she did as a child. She was able to do spins as soon as she took to the ice rink.

‘As I started doing it, the memories came flooding back and I remembered things like getting medals when I was a little girl,’ Mrs Harkness said.

She found a coach and told him she was going to enter the British Figure Skating Championships. 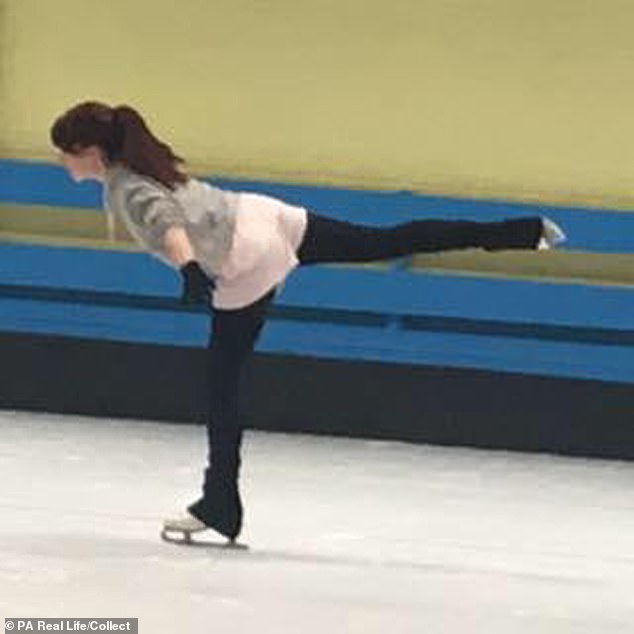 Mrs Harkness decided to try figure skating because it was something she did as a child. Remarkably, she was able to do spins as soon as she took to the ice rink (pictured) 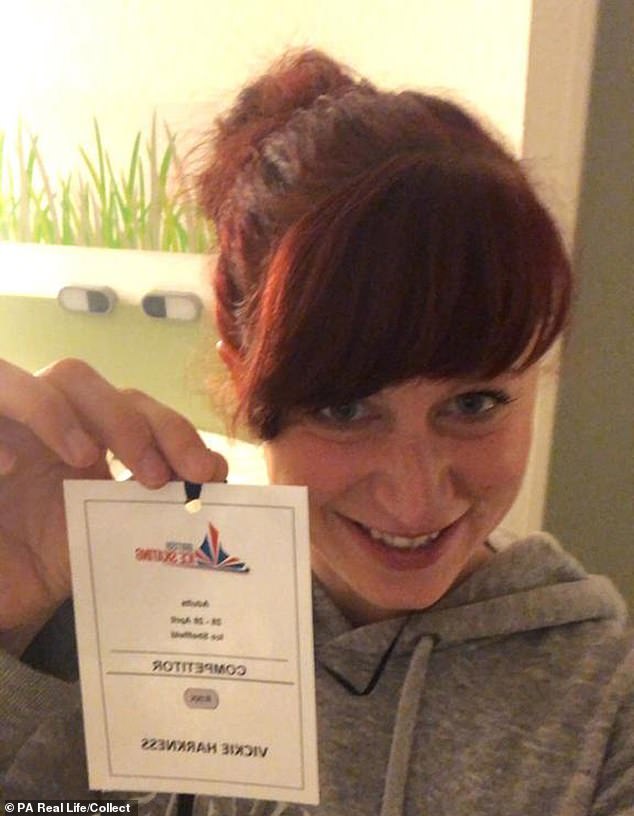 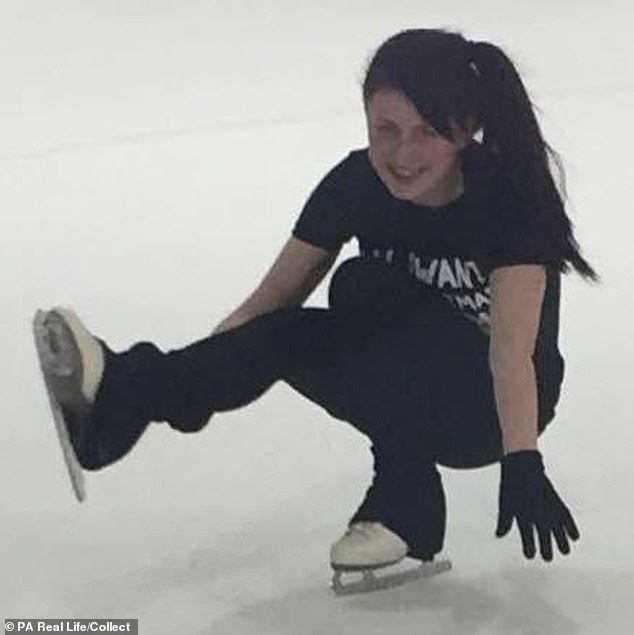 Mrs Harkness (pictured ice skating), who is raising awareness of encephalitis, said: ‘It was a really empty awful feeling – like I’d forgotten who I was’

In April this year, Mrs Harkness competed in the pre-bronze category, held in Sheffield, three years after her stay in hospital.

Alongside her skating, Mrs Harkness has also obtained an NVQ qualification in childcare – in half the time it usually takes.

She returned to work as an outdoor activities instructor around a year after she returned home.

Now she is raising awareness of the condition and has also been organising a charity fun day to raise money for Newcastle Victoria Royal Infirmary, the hospital she credits with saving her life.

She said: ‘Shona is my rock. I trust her with my life and don’t know where I’d be without her. She protected me throughout my illness and made sure I felt safe.

‘She kept faith in me and knew I would come back because she kept getting little glimmers of me. I couldn’t ask for a better wife.’