Devoted dad inspired by his daughter to do a triathlon every day: When his child fell ill, Mike Neville found a unique way to channel his anguish – now he’s raising thousands for charity 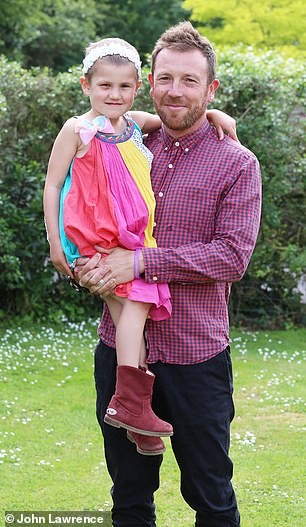 Polly Neville asks her little girl, Snowdrop, how she ‘tricked’ her friends after she lost her hair. The vibrant five-year-old dashes out of their kitchen and returns wearing a wig in the style of Elsa from the Disney film Frozen, with a long blonde plait.

Then, with a toothy grin, she whips off the wig, revealing a crop of soft, pale brown hair, slowly growing back after chemotherapy.

In October 2017, the Nevilles faced every family’s worst nightmare when, at the age of four, Snowy was diagnosed with rhabdomyosarcoma, a rare cancer of the skeletal muscles, most commonly in the head and neck. It affects four in one million children.

Snowy had seemed well. But, when taking a ‘first day of school’ photo in September that year, Polly, a primary school teacher, noticed her daughter’s right eye was swollen.

She’d had a butterfly painted on her face at the weekend, so Polly put it down to an allergic reaction.

But Polly says: ‘Four days later, it was getting worse, so we went to see the GP and tried an antihistamine. By the next week, we could see a lump on her eyelid.’

The GP referred Snowy to an eye clinic, who quickly referred her on to oncology. There, an ultrasound scan confirmed a tumour — and the possibility of rhabdomyosarcoma was mentioned.

Snowy was immediately sent for an investigative procedure, during which doctors removed the lump.

Then followed what her father, Mike, a chemistry teacher, describes as ‘the worst ten days of my life’ — the wait for a diagnosis. Neither Polly, 36, nor Mike, 39, who live in West Sussex, slept, and both felt a growing unease.

On the day of the diagnosis, October 3, they were desperate for a distraction. ‘We went for a run — then we just kept doing it,’ says Polly. Exercise was to become not only a lifeline for Mike to channel his frustrations during Snowy’s treatment, but a charitable endeavour to help other families facing the same struggles with childhood cancer, too.

Snowy would need nine rounds of chemotherapy over six or seven months, finishing treatment just before her fifth birthday. 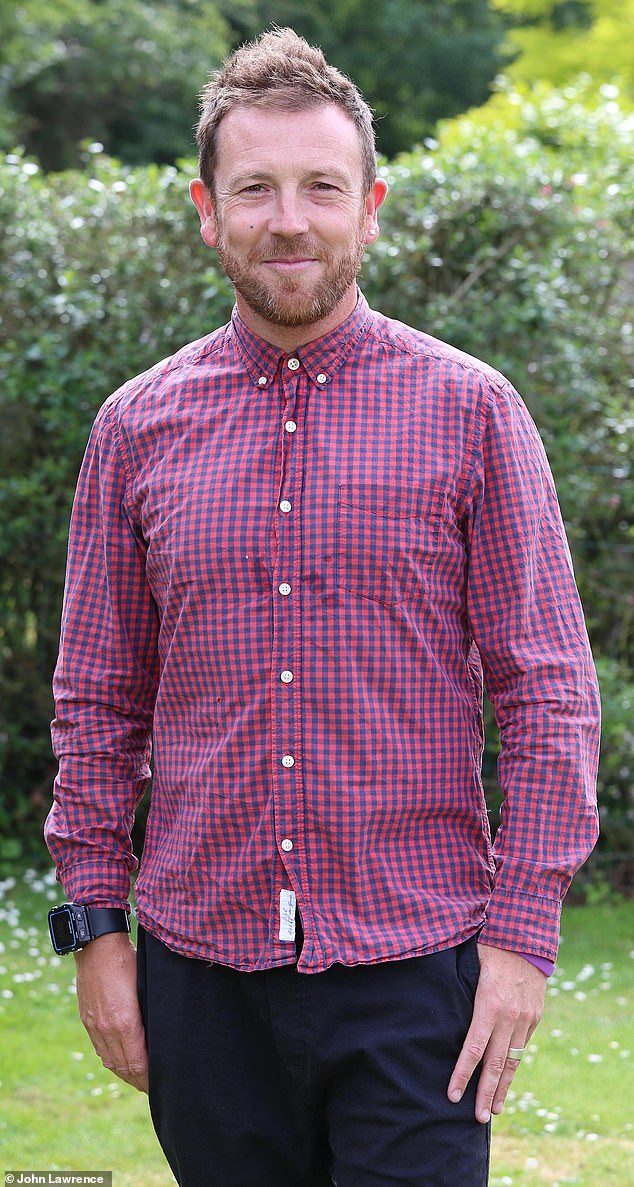 Patriarch: During Snowy’s treatment, Mike, a keen athlete, created a gruelling programme of his own to endure: Mike broke it down into chunks, swimming in his lunch break, running home from work and riding a turbo bike set up in the shed late at night, often until midnight

‘Watching drugs going into her when you know they are going to make her feel rubbish was awful,’ says Mike. ‘It was heartbreaking. It was tough to see her when she was sad, because she’s never sad.’

Polly adds: ‘But if Snowy needed lifting up in hospital, we sent in Posy, her little sister. A two-year-old can have an incredible amount of emotional intelligence.’

In order to help manage Snowy’s treatment, Polly gave up work. ‘The only person she wanted when she was really ill was me,’ says Polly. ‘She had chemo every three weeks, spending two nights in hospital each time.’

Polly stayed with her and describes those six months as ‘intensive’ — managing Snowy’s diet and constantly being vigilant to infection. ‘My hospital bag was always ready to go,’ she says.

During Snowy’s treatment, Mike, a keen athlete, created a gruelling programme of his own to endure. ‘In the build-up to the diagnosis, I knew I was going to need something quite extreme to get me through,’ he says. ‘I thought if I could do something to keep me focused, it would help me feel stronger.’ So he started doing an Olympic triathlon every day: a 1.5km swim, 40km bike ride and 10km run. ‘I needed it, psychologically,’ he says. ‘It was energising.’

Mike broke it down into chunks, swimming in his lunch break, running home from work and riding a turbo bike set up in the shed late at night, often until midnight.

Dr Frances Goodhart, a consultant clinical psychologist and author of How To Feel Better: Practical Ways To Recover Well From Illness And Injury, suggests that exercise can counter feelings of helplessness.

She refers to it as ‘active coping’ and suggests that such physically demanding activity by a parent can be a way of mirroring the gruelling process of chemotherapy. 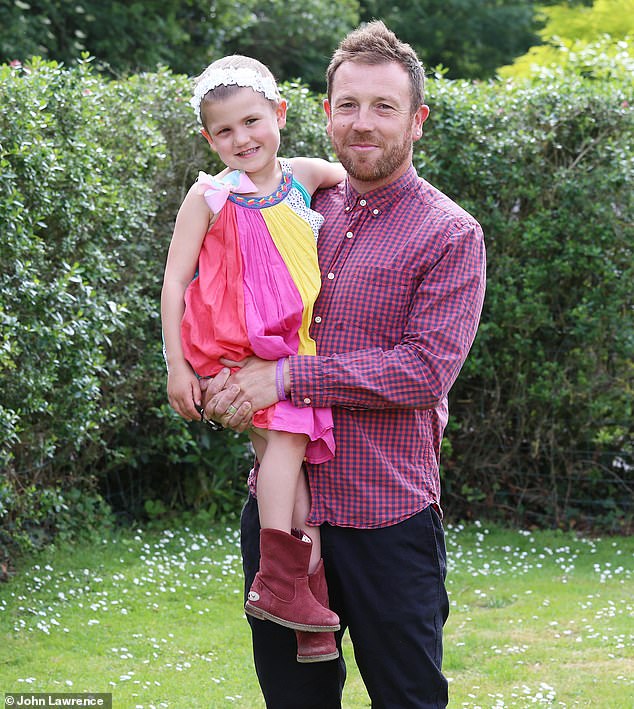 Hero: Mike marked the end of Snowy’s ordeal by running the Brighton marathon for charity

Mike says Snowy’s bravery inspired him to keep going. ‘We did it, cheeky, didn’t we?’ he says to his daughter, who is skipping in and out with Posy, now three, as we chat.

‘Being out there on the bike for an hour-and-a-half every night in winter was tough,’ says Mike, who completed 200 triathlons. ‘But I thought: “If Snowy can do it, I can do this.” The strength she’s shown has radiated around.’

After four months of treatment and training, the family decided to launch an exercise-based campaign, TriEveryDay4Snowy, to raise funds for cancer charities.

The website they set up encouraged others to raise money by doing a challenge and also enabled the Nevilles to keep loved ones informed of Snowy’s progress.

‘Part of the reason for raising money was because we appreciated our situation [having two parents to cope financially and care for an ill child],’ says Mike.

‘Knowing what it has taken out of us — working together as a well-set-up family — I can only imagine what it’s like for people who don’t have that.’

So far, their campaign has raised nearly £50,000 for Clic Sargent, Sarcoma UK and The Sussex Snowdrop Trust (the name is a coincidence).

People have been quick to get on board. Snowdrop’s gran, who is in her 70s, has started running and took part in the Chichester triathlon, while Polly’s colleagues at her primary school began running at lunchtimes. ‘Our school secretary says it has changed her life,’ says Polly.

For Snowy, one of the things she missed most during her treatment was swimming. Now, she’s back in the pool in her Little Mermaid costume.

Polly says: ‘She doesn’t seem to remember any of the bad bits. She is 100 per cent amazing. 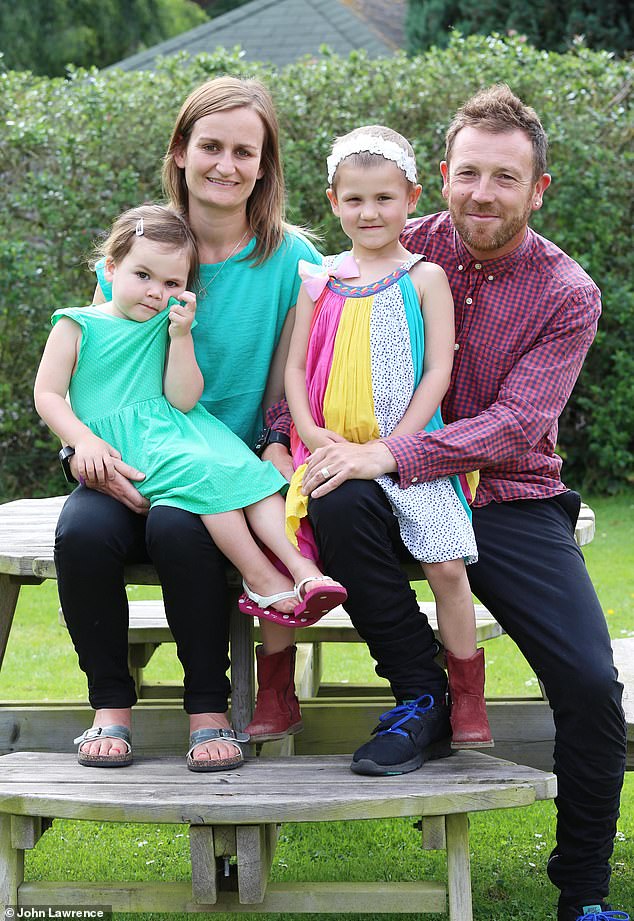 Together: Mike Neville and family, including wife Polly, Snowy and their other daughter, Posy, photographed at their home near Chichester

‘She still talks about it and got upset recently when we tried to take her temperature, but she is otherwise getting on with life. And she knows everything there is to know about chemotherapy and regularly puts her dolls on a “drip”, using string and a plastic bag taped high up.’

Mike adds: ‘She will even make sure that she is wearing blue medical gloves and will perform a flush on the line first to check it is all working, then connect the drip.’

Snowy turned five after her last round of chemo in April and Posy turned three, so, to celebrate, they had two parties — Rapunzel and Peppa Pig-themed.

Mike and Polly marked the end of Snowy’s ordeal by running the Brighton marathon in aid of their charities. Polly willed herself forward through tears of effort and emotion.

Snowy will have check-ups every three months for three years, then every six months for up to five years. But the prognosis is positive.

Meanwhile, the family are readjusting. ‘The first week after the chemo finished was really hard,’ says Polly. ‘While you are going through the treatment, you know exactly what you’re doing. You are doing your job, keeping her safe.

‘Now she has to go to school by herself and you’re away from that protective medical environment. You have to accept that she’s OK.’

Dr Goodhart says this can be almost as challenging as the treatment itself. ‘Parents do whatever they can to get themselves and their child through. Emotion hits when the treatment is over. Parents can feel anxious and low.’

But Mike and Polly seem to have as much energy as Snowy, who is drawing, colouring-in and cutting out flowers.

They’re going paddle boarding this evening and, as a fundraiser, are planning an exhibition of the many paintings Snowy made during treatment. Last summer, Mike went running with triathlete Jonny Brownlee and the whole family went cycling with Olympian Sir Chris Hoy, a friend of a friend.

‘We are still blown away by the love and warmth he shared with us,’ says Mike. ‘They are both incredible people.’