Starved by the NHS: Three patients a day DIE from malnutrition, thirst or choking on hospital wards, damning statistics reveal

Hundreds of NHS hospital patients have died of malnutrition, thirst and choking on wards, figures have revealed.

Almost three patients a day died because of the neglect and 936 patients in NHS hospitals in 2017 had one of the symptoms listed on their death certificates.

Patients are being ‘forgotten to death’, one charity said, with another warning there needs to be ‘urgent action’ to keep old people out of hospital.

There are concerns staff shortages make it more difficult to ensure inpatients get enough to eat and drink. 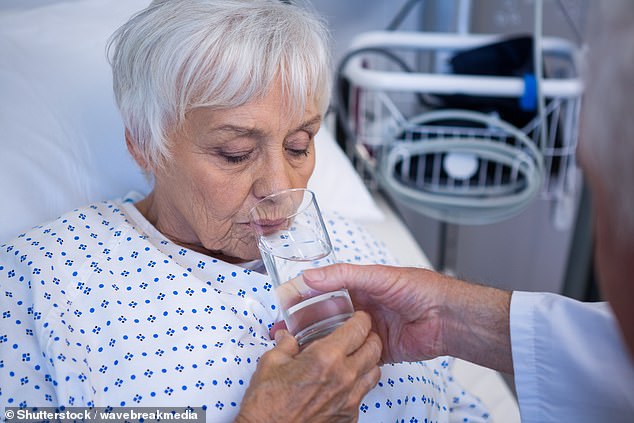 Dozens of people are dying on NHS wards because they aren’t getting enough food and water, figures show, with an age charity warning elderly people are at higher risk (stock image)

In 2017 an average of 75 people per month died with malnourishment, dehydration or choking named as a contributing factor on their death certificate.

Throughout the year a lack of food was the main cause of death for 74 people – believed to be the most ever.

The figure is 34 per cent higher than in 2013, when 55 people died of starvation, according to The Sun.

An age charity has warned older people are at particular risk of starving, and debilitating conditions like dementia can make it difficult for them to eat or be fed.

NHS Resolution, which deals with compensation, has paid out £312,000 in the last five years for claims regarding hospital-caused malnutrition The Sun reports.

‘It is tragic,’ said Joyce Robins, spokesperson for Patient Concern. ‘It would seem from the figures that too many people are not getting adequate care.

‘However, I can imagine that in a busy ward, with staff stretched to the limit, the quiet patients in the corner can be forgotten to death.

‘It all comes down to too few staff for too many patients. It all seems a very sorry state of affairs.’

Statistics showed 291 of the 936 patients choked to death, while dehydration was the main cause of death for 37 and a contributing factor for 265.

There is believed to be overlap in the figures among patients who had more than one of the conditions listed on their death certificate.

If people don’t get enough to eat and drink their immune system becomes weakened, making them more likely to get infections and struggle to fend them off.

Malnutrition also causes rapid weight loss, tiredness and muscle weakness, all of which can quickly make someone more frail and vulnerable.

Elderly people are particularly at risk because they are often already weaker and have longer recovery times.

Director of Age UK, Caroline Abrahams told The Sun: ‘The shocking reality is that in our country today more than one million older people suffer from or are at risk of malnutrition.

‘We know there is a real lack of support for people in the community, meaning around a third of older people admitted to hospital are already malnourished or at risk.

‘We urgently need to see more action long before they ever get to hospitals.’

WHY DO WE NEED TO DRINK WATER?

Water accounts for about 60 per cent of the human body, including 90 per cent of our blood. Here are five reasons why it’s vital to drink enough every day:

1. For clear eyes and full hearts

Water lubricates the eyes to keep them moist and help vision. It also carries oxygen through the body, which is key for heart health.

Cartilage, the connective tissue holding bones together, is 80 per cent water. Those who don’t drink enough have a higher risk of joint pain and injuries.

3. For clarity of thought

The brain is used to a certain amount of water, and when it’s dehydrated we get dizzy, slow of thought, with slower reactions.

Without water, faeces doesn’t break down properly and the stomach can fill with acid, increasing the risks of stomach ulcers, colon cancer, heartburn, constipation, and metabolism disorders.

When the blood lacks water, it thickens, increasing blood pressure.