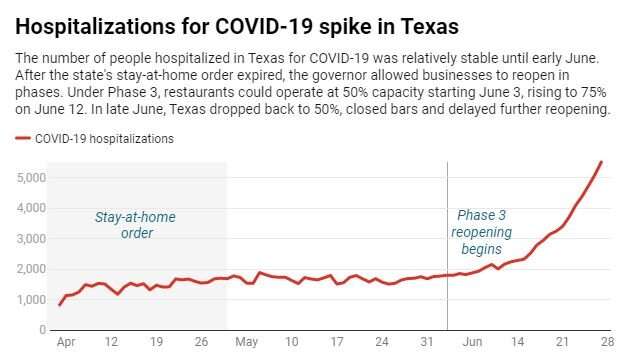 The July 4 holiday weekend usually means cookouts and big gatherings in Texas, but right now, the state is facing a public health catastrophe.

Hospitals in Dallas and Houston are nearing ICU capacity as the number of COVID-19 cases spikes across the state. The death toll from the virus is up 50% from a month ago.

It did not begin like this. Texas had lower COVID-19 rates and case counts than many other large states through most of the spring.

What happened, and what can be done to turn it around now? As Gov. Greg Abbott halts plans to further reopen the economy, orders bars closed and limits large gatherings, the answers to both of those questions may hold lessons for other states.

As public health researchers and professors at Texas A&M University, we have been monitoring the shifting dynamics of the disease’s spread to help county and state officials plan for increasing health care and other needs related to COVID-19.

When the pandemic arrived in Texas in early March, state officials provided clear messages that the virus was a dangerous threat and that public health safety precautions would be necessary.

They ordered travel restrictions between Texas and Louisiana, where New Orleans had an outbreak, and instituted a mandatory 14-day self-quarantine for anyone from high-risk areas flying into the state. Local leaders issued stay-at-home orders, and the governor followed with a similar statewide order in April and closed nonessential businesses.

As the shutdown continued, however, COVID-19 cases didn’t overwhelm the health care system as feared. The governor allowed the stay-at-home order to lapse on April 30 and began reopening the economy. The weekend the order ended, Texas’ beaches were crowded with people, many no longer worrying about social distancing or wearing masks. Restaurants and bars began reopening, bringing more people together.

Now, the risk has shifted again, and in a very short time frame. Since June 1, there have been over 70,000 new confirmed cases in Texas, with daily increases reaching more than 6,000. 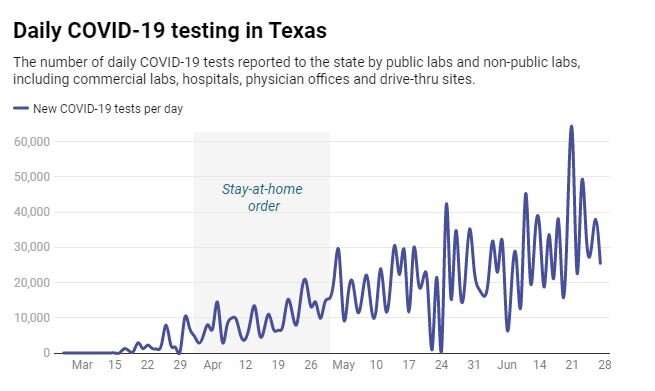 Where previously the confirmed COVID-19 cases tended to occur in clusters around the state such as nursing homes, assisted living facilities and processing plants, the phased reopening of businesses provided new opportunities for disease spread in the broader community. The people infected now are notably younger and concentrated in the largest cities.

Abbott said the state had identified bars as one of the most dangerous spreaders of the virus, and he expressed regret about allowing them to reopen so quickly. “If I could go back and redo anything, it probably would have been to slow down the opening of bars,” he told KVIA. “People go to bars to get close and to drink and to socialize, and that’s the kind of thing that stokes the spread of the coronavirus.”

There are three keys to preventing the spread of the coronavirus while there is no vaccine: testing to find it, contact tracing to prevent those who might have been exposed from spreading it, and the big one—individual and group behavior.

Texas’ testing has slowly increased over time, but it has been accompanied by a much larger percentage increase in positive results. While more testing is needed, getting people to agree to be tested isn’t always easy. Many Texans perceive that results take too long, cost too much, are inconvenient or are not needed, particularly if they have mild or no symptoms.

The nature of the virus makes contact tracing challenging. The delay of up to two weeks between exposure and symptoms, if symptoms appear at all, means carriers are generally unaware they are spreading the virus to others. Texas is investing in more contact tracing to educate and isolate individuals who may have been exposed, but it only had 2,900 of the planned 4,000 contact tracers in place by June 1.

Because this latest spike in COVID-19 cases is linked to community-based spread, intensive contact tracing to target individuals needs to be matched with disease containment strategies in affected communities.

Reinforcing these strategies now so individuals, particularly those in the lowest risk categories for serious illness, understand their role in preventing the spread of the virus is critical to flattening the curve again. Knowing that there is a lag of one to two weeks from an increase in cases to the predictable consequences of more serious illnesses, hospitalizations and fatalities, makes this a huge challenge.

The unfortunate reality is that many Texans who now have COVID-19 but aren’t yet showing symptoms will become severely ill or even die of COVID-19 in July. 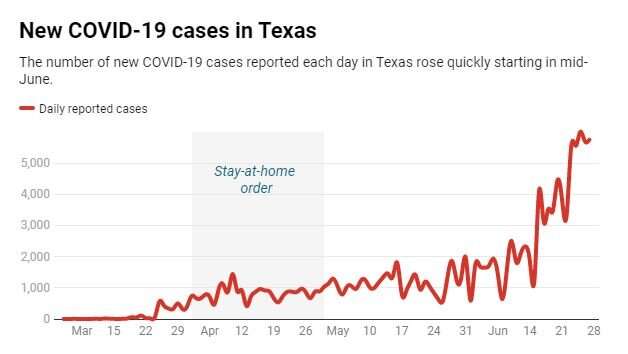 What needs to happen?

The governor’s order on June 25 to pause reopening the economy – along with orders to close bars, reduce restaurant capacity and limit gatherings of over 100 people—has reminded Texans who may have perceived an “all clear” in recent weeks that the virus remains dangerous. Several city and county officials are now urging the governor to go farther and issue a new stay-at-home order or let them issue their own.

Aligning messaging from the governor and local leaders may help encourage people to take more care, particularly since the governor has taken a stance that a balance between health and the economy is needed.

Whether Texas and states like Florida and Arizona that are also experiencing steep rises in COVID-19 illnesses can bring the virus back under control without closing more of the economy again is the big question. Florida and Texas have both ordered bars closed to target some leading sources of the latest disease spread. They are allowing cities and counties to require mask-wearing in public, but neither state has mandated it. Abbott earlier had blocked local governments from enforcing face mask rules. In Arizona, Gov. Doug Ducey first urged people to stay home without mandating behavior changes, then later ordered bars, gyms and theaters to close.

Will these steps be enough to flatten the curve?

The answer depends largely on changing people’s behavior. Going forward, some of the most important steps are to reinforce the messaging of established public health practices: