A pharmacist who dishes out drug to cancer patients had to fend off the disease herself after being diagnosed with an ovarian tumour.

Amy Smith-Morris, 32, then defied expectations by getting pregnant despite having had an ovary and fallopian tube removed.

Dr Smith-Morris, from Saskatoon in Canada, is now in remission and a mother to Max, who was born last month.

She first noticed something was wrong when she gained weight, felt bloated and suffered from heartburn for the first time.

When the symptoms didn’t go away after returning from her honeymoon to Italy and Greece in 2016, she decided it was time to see a doctor.

They found a 21cm tumour on her left ovary and did four cycles of chemotherapy to kill the cancer. 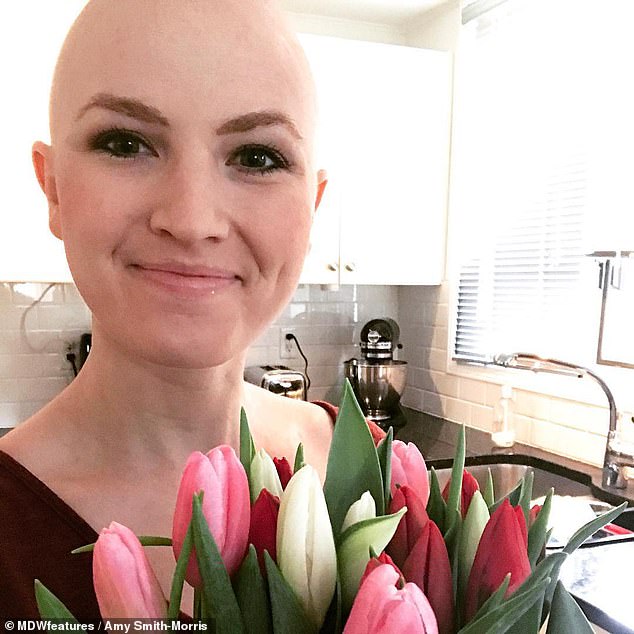 Amy Smith-Morris, a pharmacist who helps treat cancer patients, said she believes a positive mindset is key to fighting the disease (Pictured: After her chemotherapy in early 2017)

Dr Smith-Morris managed to get pregnant despite her treatment – the surgery and chemotherapy – being known to reduce and even destroy fertility.

Discussing her original symptoms, Dr Smith-Morris said: ‘Because of my young age, no one expected cancer.

‘But many strange things can grow on ovaries, so [my doctor] sent me for an ultrasound to see if there was a fibroid or something. Unfortunately, a large tumour was found.

‘In that moment, I was definitely in shock. I lay down on my bed and called my mum because I felt like my world had just stopped.

‘We all have that inner voice that tells us when something is wrong. Mine was saying that this news wasn’t going to be good.

‘The gynaecologist came in, sat next to me on the bed, and said it was cancer.’

Dr Smith-Morris said she began feeling ill after her honeymoon to Europe with her husband, Marc, 31, in the autumn of 2016.

Originally thinking the weight gain and bloating were signs of a pizza, cheese and wine overload, she suspected something more sinister when they didn’t go away.

She described her symptoms as ‘sneaky’ and said she knew ovarian cancer was notoriously difficult to spot.

‘When you’re trained as a clinician, you don’t stop acting like a clinician when you become the patient,’ she said.

‘I began asking questions about what they saw on the scan to try to predict my chances of surviving.

‘I had a rare form of ovarian cancer and a mixed tumour so it’s really difficult to put my diagnosis in a box. The tumour was a mix of a teratoma and a type of germ cell tumour. 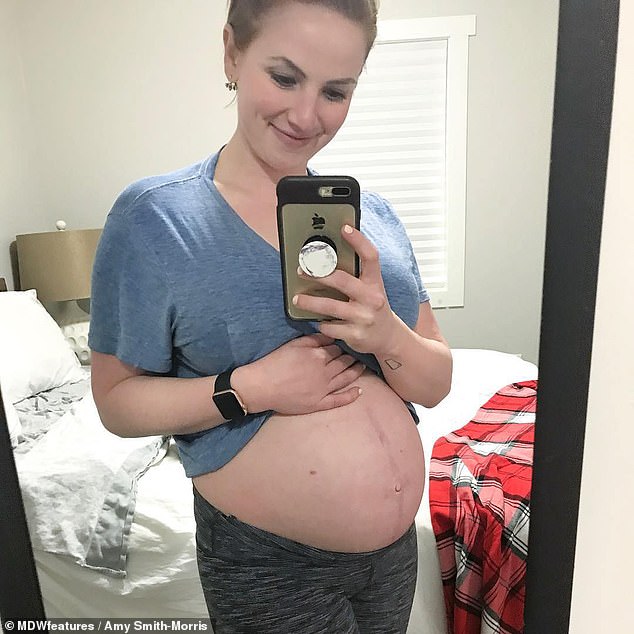 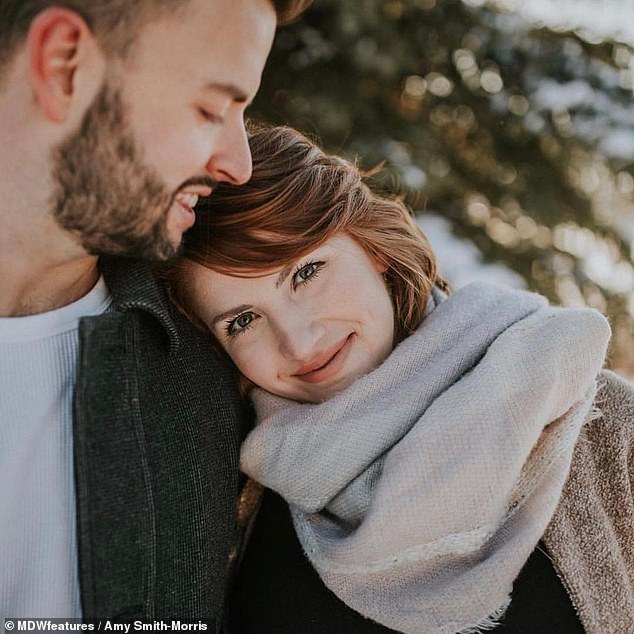 Dr Smith-Morris (pictured with her husband, Marc, after her recovery) said she believes maintaining a positive mindset was crucial to her recovery

‘I had one ovary and the fallopian tube removed. In my case, this included a tumour that had engulfed my left ovary, measuring 21 centimetres [8.2ins] by 10 centimetres [3.9ins].

‘I then started chemotherapy just before Christmas 2016. I did a total of four cycles, each 21 days apart and I finished in early March 2017.’

Despite having a large part of her reproductive system removed, Dr Smith-Morris clung to her hope of starting a family.

And, after being healed of the cancer in 2017, she managed to return to full-time work after spending months recovering during which she was crippled by fatigue.

Then last summer she found out she was pregnant.

Comparing the trials of pregnancy to her cancer ordeal, she said it was ‘easy’ waiting to become a mother before she gave birth to Max by caesarean section last month.

Dr Smith-Morris said: ‘During my treatment, there were definitely moments of darkness but there were also a lot of great moments.

‘When you are diagnosed with cancer, everything is put into perspective. 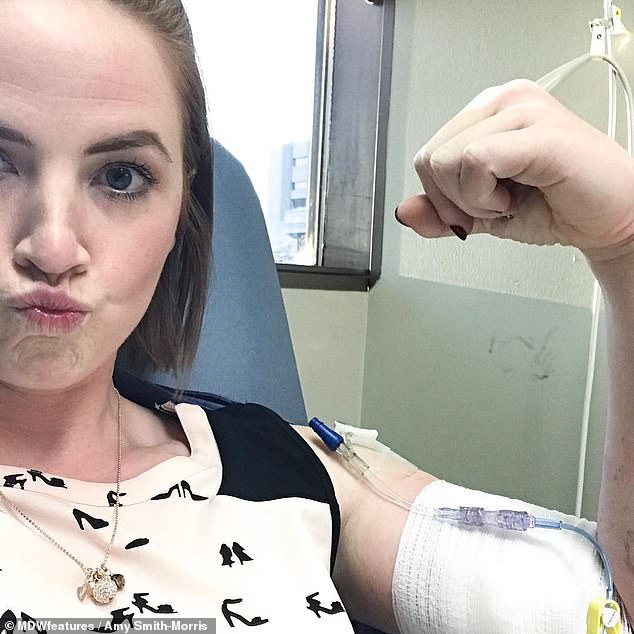 Dr Smith-Morris, pictured during her first ever chemotherapy session, said she was still thinking like a scientist when she was diagnosed and would ask questions about her scans 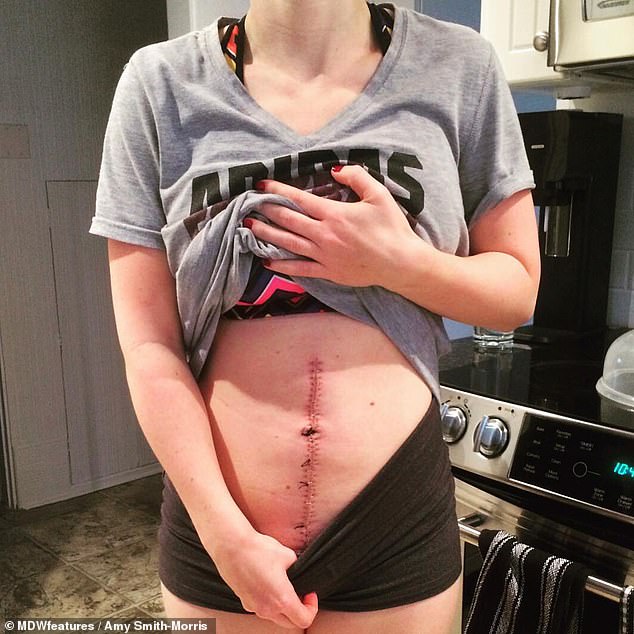 Dr Smith-Morris needed one of her ovaries and a fallopian tube surgically removed to try and get rid of the cancer (pictured showing her scar), but she was not left infertile by her treatment 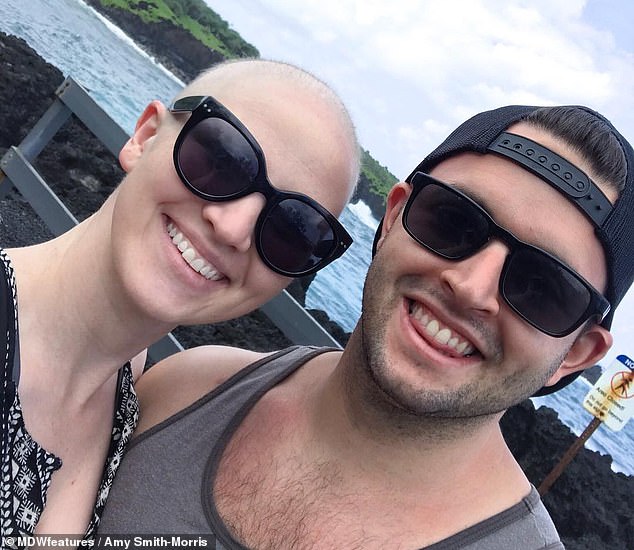 Dr Smith-Morris, pictured with her husband Marc in 2017, said having cancer made her put everything into perspective

‘I strongly believed that it would be possible for us to conceive and I held onto that belief until it became our reality.

‘Even though I’m very scientifically driven in my practice as a pharmacist, I still believe strongly in the power of mindset.

‘I held strong beliefs throughout my diagnosis and recovery and those beliefs are what carried me through.

‘Pregnancy was amazing. I really can’t complain. Sure, I had morning sickness, fatigue, heartburn and insomnia, but compared to what I’ve been through, it was easy.’

The most difficult part, she said, was not being able to have cancer check-ups because the scans were unsafe while she was pregnant. 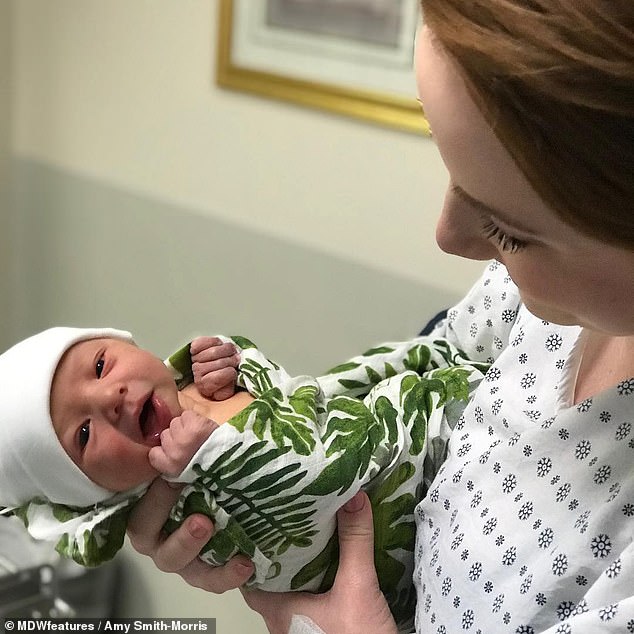 ‘Pregnancy was amazing,’ Dr Smith-Morris said (pictured with her newborn son, Max. ‘I really can’t complain. Sure, I had morning sickness, fatigue, heartburn and insomnia, but compared to what I’ve been through, it was easy’ 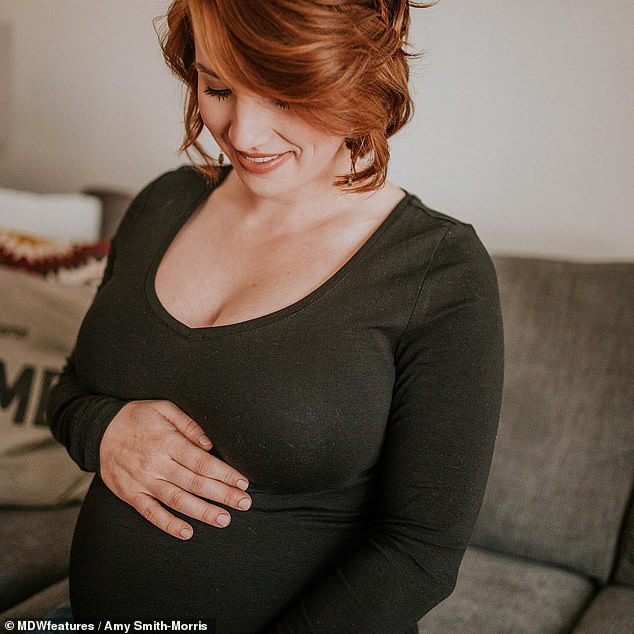 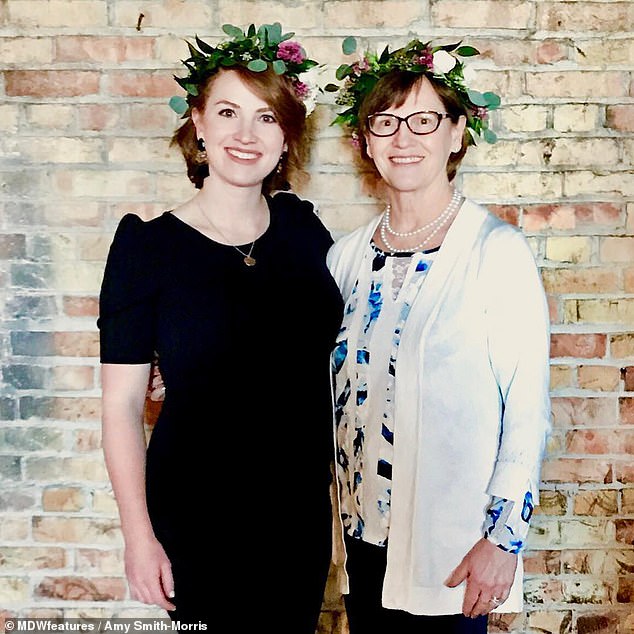 Dr Smith-Morris, pictured with her mother, said it has been difficult to stop imagining the ‘what-ifs’ of life without cancer

But the new mother also said she wants to stop cancer having a grip on her day-to-day life, admitting its shadow is difficult to escape.

‘I couldn’t be monitored for a cancer recurrence with a CT or PET-CT because it isn’t safe for the baby to have these scans,’ she said.

‘It’s tough to not think about all the “what ifs” after cancer. It can be really debilitating.

‘You want to do what you can to protect your family in case you aren’t around anymore. It often makes it tough to think about moving on, but you have to.

‘Cancer already took so much of my time and energy. It basically paused my life for the better part of a year and a half. I can’t let it take any more time from me.’

WHAT ARE THE SYMPTOMS OF OVARIAN CANCER?

The symptoms of ovarian cancer can be difficult to recognise, particularly early on.

They’re often the same as symptoms of less serious conditions, such as irritable bowel syndrome (IBS) or pre-menstrual syndrome (PMS).

The most common symptoms of ovarian cancer are:

Other symptoms can include:

When to see your GP

See your GP if:

It’s unlikely you have cancer, but it’s best to check. Your GP can do some simple tests.