Thousands of men could be spared life-changing treatment for prostate cancer following a scientific breakthrough.

They can now find out how likely they are to die in next 10 or 15 years, and how much treatment will improve their survival chances.

For a third of prostate cancer patients, or roughly 15,000 men in Britain, the chance of dying is so low that choosing to have surgery or radiotherapy will provide little benefit.

The decision of whether to go ahead with treatment is now easier after scientists developed a computer questionnaire. 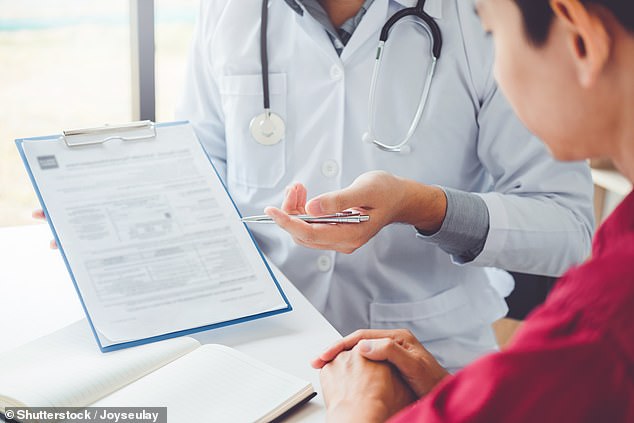 The quiz, which takes just a few minutes and should be completed with a doctor’s supervision, gives men their personal odds of dying from prostate cancer or other illness over the next decade and 15 years.

They can then see a chart showing their increased chances of survival following treatment.

The results are based on men’s stage of cancer, age and medical test results, and allow them to weigh up the gains against their odds of suffering erectile dysfunction and incontinence if they go ahead with surgery.

It could see more men choosing ‘active surveillance’, which means a doctor closely monitoring their prostate cancer instead.

Dr Vincent Gnanapragasam, from the University of Cambridge, who helped develop the questionnaire, said: ‘We believe this tool could significantly reduce the number of unnecessary – and potentially harmful – treatments that patients receive and save the NHS millions every year.

‘This isn’t about rationing treatments – it’s about empowering patients and their clinicians to make decisions based on better evidence.

WHAT ARE SOME RISKS OF SURGERY FOR PROSTATE CANCER?

A radical prostatectomy is the surgical removal of your prostate gland. This treatment is an option for curing prostate cancer that hasn’t spread beyond the prostate or hasn’t spread very far.

A trial showed possible long-term side effects of radical prostatectomy may include inability to get an erection and urinary incontinence.

Before having any treatment, 67 per cent of men said they could get erections firm enough for intercourse.

For urinary incontinence, 1 per cent of men said they used absorbent pads before having any treatment.

When the men who had a radical prostatectomy were asked again after 6 months, this had increased to 46 per cent. After 6 years, this had improved to 17 per cent.

In extremely rare cases, problems arising after surgery can be fatal.

For many men, having a radical prostatectomy will get rid of the cancer cells. However, for around one in three, the cancer cells may not be fully removed and may return some time after the operation.

‘In some cases, treatment will be the right option, but in many others, patients will want to weigh up the treatment benefits versus the risks of side effects.’

More than 47,000 men a year in Britain are diagnosed with prostate cancer, and the number of patients is predicted to rise by 69 per cent by 2030.

Currently men are classed by the NHS as being at low, intermediate or high risk from prostate cancer – a measure which evidence suggests is only accurate in 60 to 70 per cent of cases.

The new questionnaire was found to be 84 per cent accurate in predicting men’s chances of dying from the illness or other causes. It was tested against medical records for more than 10,000 British prostate cancer patients and 2,546 living in Singapore.

The computer algorithm which gives men their odds, and how much treatment improves them, is based on just 10 questions.

Men provide their age, clinical stage of cancer, how aggressive it is and medical test results, as well as whether they have recently been in hospital.

A more personalised assessment was needed, according to experts, because men are more likely to die ‘with prostate cancer than from it’.

The risk of death from prostate cancer can be lower than a fatal heart or stroke if the cancer is slow-growing.

Treatment would cut his prostate-mortality to just three per cent but reduce his overall chances of death hardly at all, from 30 to 27 per cent.

The Daily Mail has campaigned for an urgent improvement to prostate cancer treatments, and there is a need for men to better understand whether to go ahead with them. However, for some men, having surgery or radiotherapy can be life-saving.

The research on the PREDICT Prostate questionnaire, published in the journal PLOS One, was led by Dr David Thurtle, academic clinical fellow in urology at the University of Cambridge.

He said: ‘As far as we are aware, this is the first personalised tool to give an overall survival estimate for men following a prostate cancer diagnosis.

‘We hope it will provide a more accurate and objective estimate to help men reach an informed decision in discussion with their consultant.’

Researchers who tested the tool against cancer doctors found many overestimate the risk of men dying from prostate cancer.

WHAT IS PROSTATE CANCER?

How many people does it kill?

It means prostate cancer is behind only lung and bowel in terms of how many people it kills in Britain. In the US, the disease kills 26,000 each year.

Despite this, it receives less than half the research funding of breast cancer – while treatments for the disease are trailing at least a decade behind.

How quickly does it develop?

Prostate cancer usually develops slowly, so there may be no signs someone has it for many years, according to the NHS.

If the cancer is at an early stage and not causing symptoms, a policy of ‘watchful waiting’ or ‘active surveillance’ may be adopted.

Some patients can be cured if the disease is treated in the early stages.

But if it diagnosed at a later stage, when it has spread, then it becomes terminal and treatment revolves around relieving symptoms.

Thousands of men are put off seeking a diagnosis because of the known side effects from treatment, including erectile dysfunction.

Tests for prostate cancer are haphazard, with accurate tools only just beginning to emerge.

There is no national prostate screening programme as for years the tests have been too inaccurate.

Doctors struggle to distinguish between aggressive and less serious tumours, making it hard to decide on treatment.

Men over 50 are eligible for a ‘PSA’ blood test which gives doctors a rough idea of whether a patient is at risk.

But it is unreliable. Patients who get a positive result are usually given a biopsy which is also not foolproof.

Scientists are unsure as to what causes prostate cancer, but age, obesity and a lack of exercise are known risks.

Anyone with any concerns can speak to Prostate Cancer UK’s specialist nurses on 0800 074 8383 or visit prostatecanceruk.org