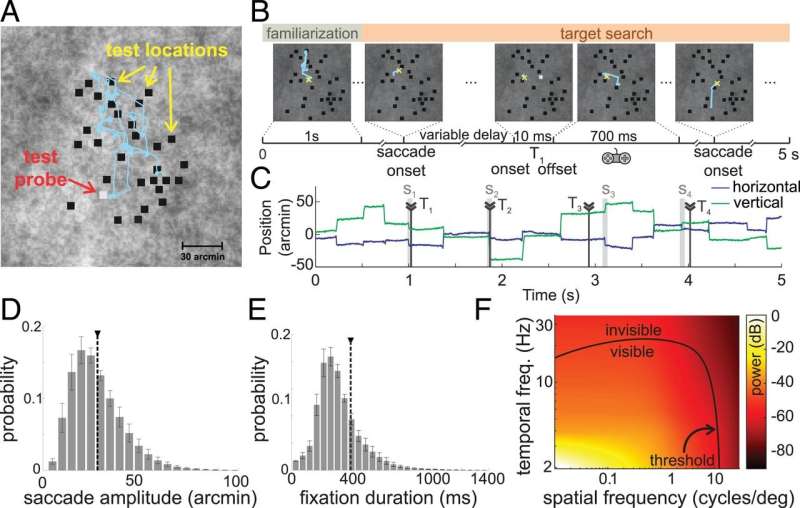 Fixational eye movements are tiny movements of the eye—so small we humans aren’t even aware of them. Yet they play a large role in our ability to see letters, numbers, and objects at a distance.

In a new paper published in Proceedings of the National Academy of Sciences, researchers at the University of Rochester, including Michele Rucci, a professor of brain and cognitive sciences, and Janis Intoy, a postdoctoral research associate in Rucci’s lab, further cement the evidence for the important role of these tiny movements. By studying how a type of fixational eye movement called a microsaccade affects the foveola, a small region at the center of the retina, the researchers provide important foundational information that can lead to improved treatments and therapies for vision impairments.

A tiny, but essential, region of the eye

Although the foveola is tiny, it is essential for seeing fine details and conducting everyday tasks such as searching for a friend in a crowd or reading distant road signs while driving. Because the region is so small, however, we need to constantly shift our gaze to allow the foveola to get a full view of the world, similar to rotating a telescope to get a full view of a scene. Unlike when we might rotate a telescope, however, our eyes make most of these gaze shifts, especially the smallest ones, on their own, often beneath our awareness. But the gaze shifts are critical for vision; says Intoy, “How well we see at any given moment is tightly linked to how and when we shift our gaze.”

The researchers focused on microsaccades, tiny rapid gaze shifts that frequently occur when we’re examining fine details. It’s long been known that vision is transiently impaired during larger gaze shifts, such as those we are aware of making, for instance looking back and forth between two computer screens. This phenomenon of transiently impaired vision is known as saccadic suppression. Until now, however, it was unknown whether a suppression also occurs during microsaccades and whether that would affect visibility in the foveola.

Says Rucci: “In our lab we have the high-resolution tools to study vision at this small scale, whereas other research has historically focused on the peripheral regions of the eye, where such precision and accuracy are not required.”

A period of blindness

The researchers recorded microsaccades in human observers who were engaged in a computer task— searching on the screen for “fleas” jumping in a patch of “fur,” a task that resembles social grooming in primates.

What the researchers found was surprising.

Immediately before and immediately after participants’ gaze shifted, the participants could not see the fleas, even when they were looking directly at them.

“We observed that microsaccades are accompanied by brief periods of visual suppression during which we are essentially blind,” Intoy says.

However, the researchers found that vision recovered rapidly at the center of the gaze and continued to improve, so that vision was overall transiently enhanced in this region after the saccade.

“Our results show that the very center of gaze undergoes drastic and rapid modulations every time we redirect our gaze,” Intoy says. “This brief loss of vision likely occurs so that we do not see the image of the world shifting around whenever we move our eyes. By suppressing perception during saccades, our visual system is able to create a stable percept.”