Prime Minister Boris Johnson has pledged a further £46 million for research into a coronavirus vaccine and rapid diagnostic tests.

The funding boost brings the British Government’s commitment up to a total of £91million. It was announced during a tour of a lab in Bedfordshire today.

There is currently no vaccine available to protect people against the coronavirus, but Mr Johnson said he hoped one will be ready in about a year.

Scientists at Imperial College London, and at pharmaceutical companies in the US, have revealed they’re planning to start human trials as early as next month.

But the Government’s chief scientific adviser, Sir Patrick Vallance, said one won’t be ready before the current global outbreak is over.

The money will also go towards developing on-the-spot tests for the coronavirus, which will allow people to be tested at home, saving time and NHS resources. 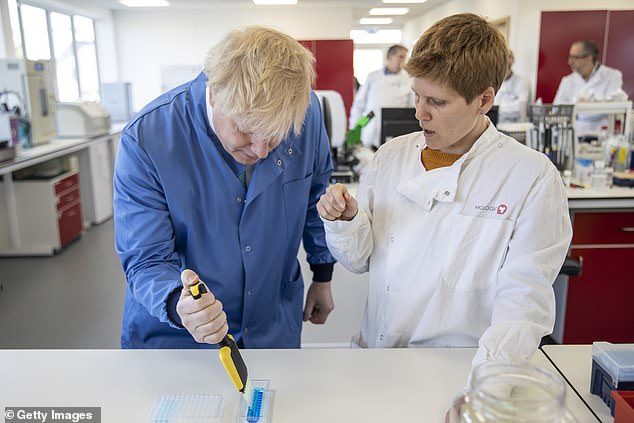 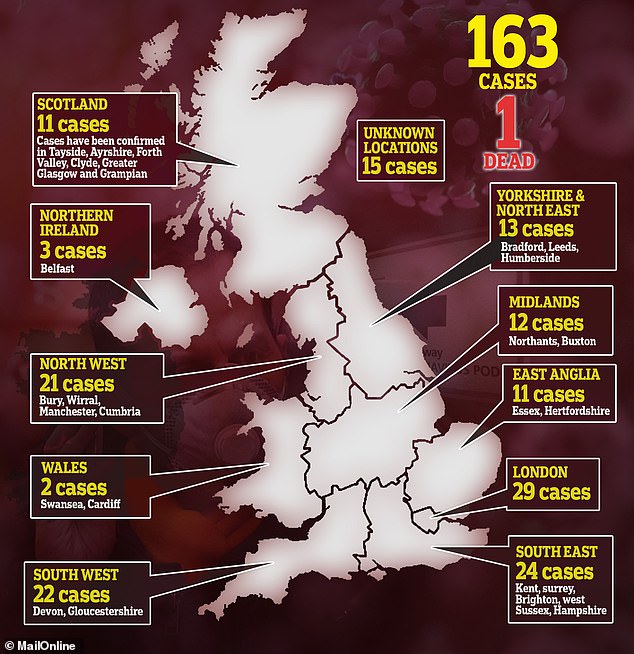 Global human trials of eight possible vaccines could start later this year, but firms would then face the task of mass-producing and distributing them.

Public Health England has developed methods of testing for coronavirus, but more rapid tests are needed as these currently rely on samples being sent to a lab.

At present it takes more than a day for someone’s test result to be confirmed and they have to be analysed in high-profile laboratories. Tests have to be done multiple times to avoid false positives.

The package announced by the PM comes under the ‘research’ phase of the Government’s four-stage ‘battle plan’ to contain, delay, mitigate and research coronavirus.

Downing Street said the UK’s investment into COVID-19 vaccine research is now worth £65 million, with £91 million in total for international work to stop the spread of the virus.

Chief scientific adviser to the Government, Sir Patrick Vallance, admitted there isn’t time to make and distribute a vaccine during this outbreak, but that developing one would be useful for the future.

Some scientists expect the virus to become a regular fixture in human health – potentially a seasonal illness like flu – now that it has spread so widely.

Sir Patrick said: ‘Rapid testing is going to be key to managing this outbreak, but ultimately vaccines are going to provide the long-term protection we need.

‘The UK has some of the world’s leading scientists and this money will help in our fight to tackle this new disease.’

But, speaking on BBC Radio 4’s Today programme, he added: ‘I don’t think we will get the vaccine for this outbreak.

‘I don’t think we’ll get something in time or at scale for this outbreak.’ 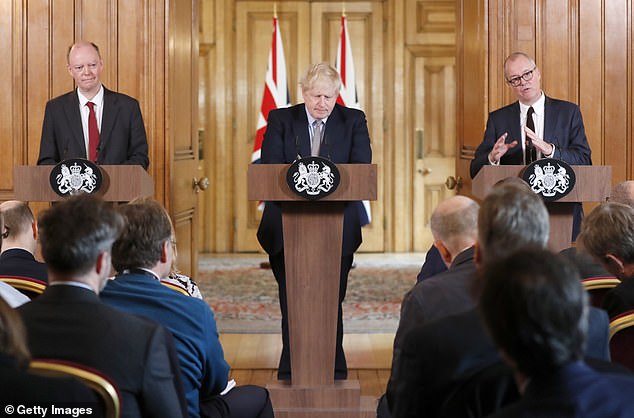 Sir Patrick Vallance, the Government’s chief scientific adviser, said a vaccine would not be ready to use during the course of this outbreak (Pictured, Sir Patrick, right, with Boris Johnson and Professor Chris Whitty at a Government briefing this week) 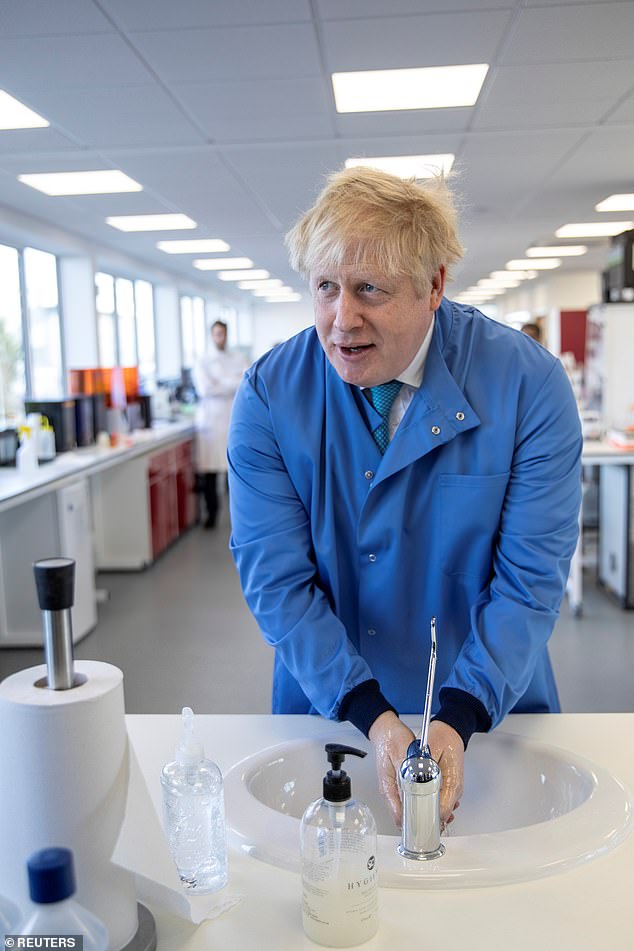 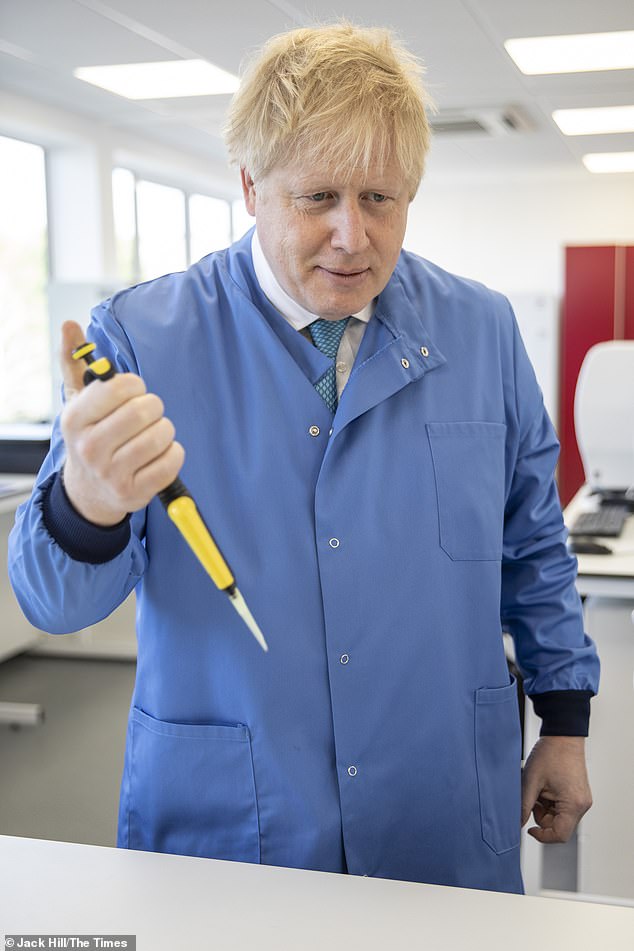 Mr Johnson said: ‘We are ensuring the country is prepared for the current outbreak, guided by the science at every stage’ 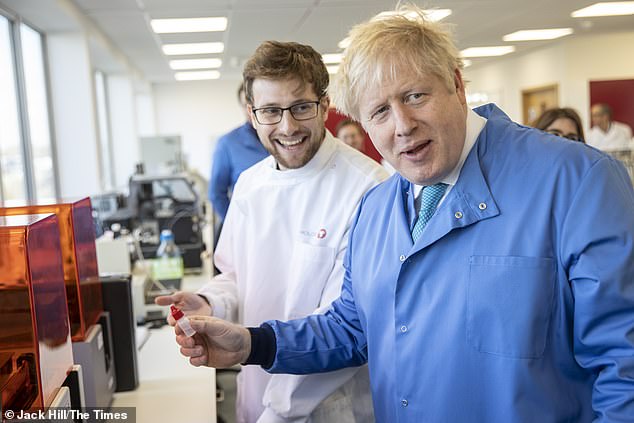 Mr Johnson spoke to scientists at the Mologic lab, which is ramping up efforts to provide more testing in people’s homes.

This will mean patients can receive treatment more quickly at home, reducing the risk of them passing the virus to others by going outdoors.

Any rapid diagnostic test could also be sent to other countries with no lab capability or whose medical facilities are not as advanced.

A new test will therefore be jointly manufactured in the UK and Senegal.

In a statement, Mr Johnson said: ‘Keeping the British people safe is my number one priority, and that’s why I’ve set out our four-part plan to contain, delay, mitigate and research coronavirus.

‘We are ensuring the country is prepared for the current outbreak, guided by the science at every stage. But we also need to invest now in researching the vaccines that could help prevent future outbreaks.

‘I’m very proud that UK experts – backed by government funding – are on the front line of global efforts to do just that.’

Speaking to reporters, Mr Johnson added: ‘What we are announcing today is a £46 million package of investment in UK science which will in time deliver a vaccine – some say in about a year – but also help us to have rapid test kits that anyone can use quickly and effectively to tell whether they have coronavirus.’

The first human trials of a coronavirus vaccine are expected to begin next month at a university in London and pharmaceutical company in the US.

Scientists at Imperial College in the English capital have been trialling their attempt at a vaccine on animals since mid-February.

And they could move onto human trials – the last phase of development before a drug can be used – as soon as April.

Meanwhile, US pharmaceutical companies Moderna and Inovio have also said they plan to start their own human trials next month.

The coronavirus, which causes a disease called COVID-19 and has infected more than 94,000 people around the world, cannot currently be cured or prevented.

People who catch it have to be isolated and wait for their body to fight off the illness, with medical help if they need it for symptoms or more serious infection.

A working vaccine could stop the bug in its tracks – some experts think it could become a permanent fixture in human society in the same way colds and flu are.

Imperial College has been working on its vaccine since the middle of January when Chinese scientists released the genetic information about the virus.

If low-level human trials are successful, the researchers will then move on to testing the vaccine in the real world where people are at risk of infection.

Passing all those tests could mean the vaccine is available to the public as early as next year.

US pharmaceutical company, Inovio, said it could have a million doses available by the end of the year and Moderna said it will also start human trials in April with aims of fast development.

Speaking on a podcast, Imperial College scientist Professor Robin Shattock said his team and others are creating vaccines ‘at a speed that’s never been realised before’.

He said: ‘Most vaccines would take five years in the discovery phase and at least one to two years to manufacture and get into clinical trials.