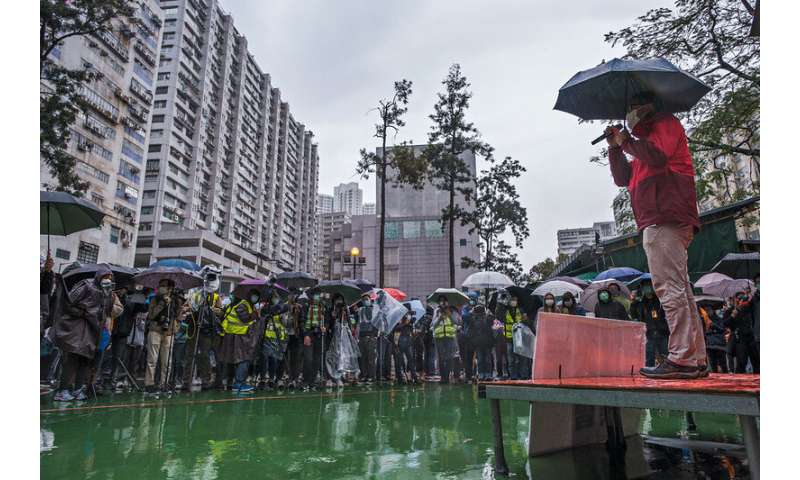 For weeks, the second largest economy in the world screeched to a halt. Stunned by the rapid spread of coronavirus (now officially termed COVID-19), roughly half of China’s population welcomed the Lunar New Year in a state of lockdown. City streets—that would have on any other year been filled with festive red lanterns and rosy-cheeked families—laid empty. Shopping malls were abandoned, two of the world’s longest borders were closed, and thousands of travelers around the world were left stranded in quarantine.

Depictions of the “climate apocalypse” often fixate on the temperature changes, sea level rise and proliferation of natural disasters wrought by climate change. Epidemics are an often overlooked outcome that belongs to that future. Medical researchers and climate scientists note that viral outbreaks may become more common with the progression of the climate crisis, which is affecting the movement of humans, animals, and pathogens. Global reactions to the COVID-19 outbreak—which have ignited discussions of sinophobia, paranoia, and scientific misunderstanding, including at Columbia—show that the world may not yet be prepared to deal with these new health crises.

COVID-19 is a viral infectious disease that causes fever, cough, and shortness of breath roughly two days to two weeks after exposure. It is primarily transmitted through respiratory droplets from sneezing and coughing, much like the flu. COVID-19 has thus far infected 77,271 people and killed 2,250. It has an estimated two percent mortality rate, though experts believe the actual rate is likely lower due to the under-reporting of mild cases. Older individuals, especially those with pre-existing health conditions, including diabetes and high blood pressure, are at greater risk of death. There is currently no preventive vaccine.

COVID-19 and other coronaviruses that have featured in recent epidemics—namely Severe Acute Respiratory Syndrome (SARS) and Middle East Respiratory Syndrome (MERS)—fall under the larger umbrella of zoonotic diseases, which are transmitted between animals and people. Other well-known zoonotic diseases include rabies, Ebola, plague, and Lyme disease. While experts are still trying to pinpoint the source of COVID-19, current prime suspects include bats and pangolins.

Zoonotic diseases already comprise roughly 70 percent of all human infections, but experts fear the climate crisis will accelerate their transmission by changing the boundaries and characteristics of existing animal habitats. Weather pattern changes and global warming are predicted to cause many wildlife species to migrate poleward (away from the equator) and toward higher altitudes, potentially putting animals in contact with new diseases to which they haven’t evolved resistance. In addition, as animals experience increased stress from these migratory changes, their immune systems may become weakened, thereby increasing both the risk of infection and amount of viral replication once infected. Decreased species diversity, an inevitable consequence of pollution and deforestation, has also been associated with more zoonotic infections within host animal populations. In summary, the climate crisis will lower host animals’ immune responses to zoonotic diseases, increase the rate of zoonotic infection by crippling biodiversity, and push animals into new migration routes that will bring them into greater contact with humans—all ultimately increasing the frequency and associated risks of infectious disease outbreaks.

The climate crisis will also force humans to migrate, likely in patterns paralleling other animal species: away from extreme weather phenomena and warming regions and toward higher altitudes. The world’s poorest populations and indigenous communities, already in close contact with nature and marginalized by many societies, are the most vulnerable and will likely be disproportionately affected by increased disease proliferation. The climate crisis is already expected to cause an additional quarter of a million deaths per year from malnutrition, malaria, diarrhea, and heat stress, with estimates of the direct annual costs of health damage ranging from $2-4 billion USD by 2030. The consequences of new animal-human interactions are unpredictable; it’s still difficult to know exactly how much the spread of zoonotic diseases into new latitudes will affect our globalized economy and society. But the global response to COVID-19 suggests it could be quite destabilizing.

In the wake of COVID-19, China’s gross domestic product growth in the first quarter of 2020 is projected to fall to 4 percent (down from 6 percent before the virus emerged), while the Dow Jones and S&P 500 have shrunk due to factory closings at Apple, Alibaba, Tesla, and other companies with major operations in China. Global oil markets, airlines, commercial product flows, and pharmaceutical production are bracing for the shock of a major economic powerhouse shutting down for several weeks. Russia, Mongolia, the Philippines, Japan, Israel, Australia, and the US have either closed their borders or imposed strict travel restrictions on China. Many countries are evacuating and quarantining their citizens trapped in China by the outbreak. Resuming previous levels of global economic activity is contingent upon getting COVID-19 under the perception of control.

Preventive treatments against coronaviruses have not been developed, and it is very likely that they will not become available until after the outbreak. It seems the most an individual can do is wash their hands and self-isolate if they have recently been to China. In the face of blaring headlines about rising deaths and soaring infection numbers, these actions may feel inadequate.

Yet, it is important to remember that public responses to viral outbreaks are not necessarily accurate depictions of the magnitude of risk. The flu, which severely infects roughly 3 to 5 million people and causes between 290,000 and 650,000 deaths each year, hardly elicits a similar global response despite having a few hundredfold greater mortality impact than COVID-19. As has been the case with COVID-19, global responses to future infectious diseases will likely be mediated by the culture and symbolic status of the country of origin, severity of symptoms, and frequency of similar disease outbreaks.