Mother, 47, claims doctors found a golf ball-sized brain tumour after being taken to hospital following a car crash with a severe headaches

A mother has today told how a car crash allowed doctors to discover she had a potentially deadly brain tumour.

Elaine Lee-Tubby was taken to hospital amid fears she sustained a brain injury because of her severe headaches following her accident in 2017.

Doctors referred the 47-year-old marketing executive for an MRI scan, which spotted the golf ball-sized mass lodged in her brain.

Mrs Lee-Tubby, from Devon, was told it was a low-grade meningioma, and while it is currently benign there is potential it may turn cancerous.

Scroll down for video 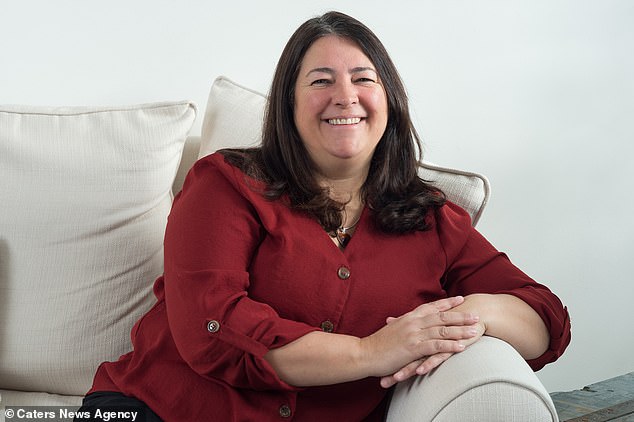 Elaine Lee-Tubby, 47, from Devon, was taken to hospital amid fears she sustained a brain injury following her accident in 2017 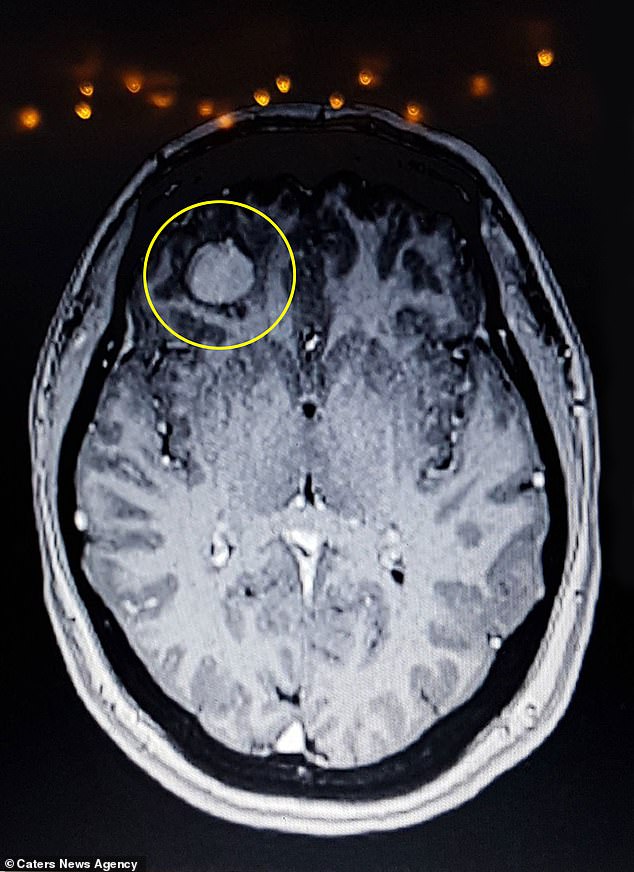 Doctors referred the marketing executive for an MRI scan (pictured), which spotted the golf ball-sized mass lodged in her brain

Speaking of her diagnosis, Mrs Lee-Tubby said: ‘I was stunned by the results of the scan – I had no idea whatsoever that I had a brain tumour.

‘It was completely out of the blue and, had it not been for a freak road accident, I wouldn’t have known that I was living with the golf ball sized tumour.

‘I’ve realised how lucky I was that a freak car accident led to my diagnosis – I dread to think what could have happened if it had been left undetected.’

She added: ‘My diagnosis was especially difficult because I’d lost my dad, Graham Lee, then 69, three years earlier to a brain tumour.

‘And I dreaded having to tell my family as it would bring back lots of difficult memories of my dad’s passing.’

Mrs Lee-Tubby, of Buckfastleigh, revealed she was driving to work in January 2017 when the accident in her Peugeot 307 happened. 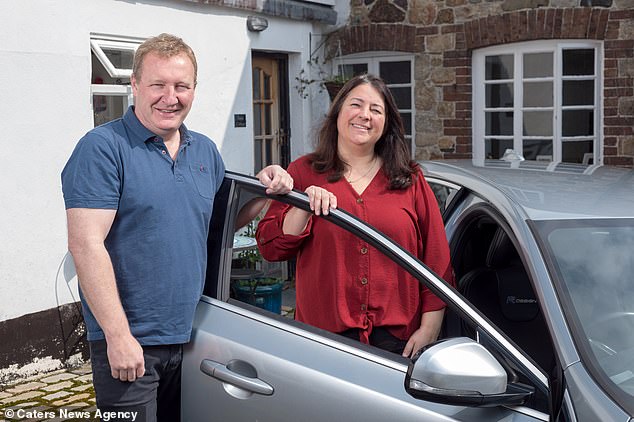 Mrs Lee-Tubby was told it was a low-grade meningioma, and while it is currently benign there is potential it may turn cancerous (pictured with her husband Shawn) 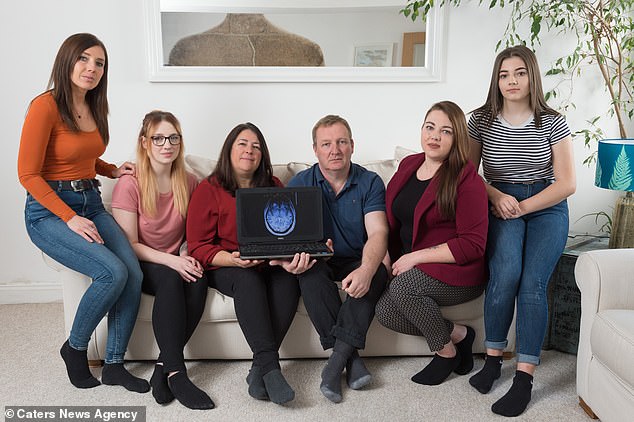 Mrs Lee-Tubby’s mass, situated behind her right eye, is now being monitored after she opted to ‘watch and wait’ (pictured with her daughters and husband, from left to right: Emma, Symone, Elaine, Shawn, Carla and Leah)

Meningioma is tumour of the tissues that protect the brain and spinal cord.

Such tumours do not spread and are benign in 90 per cent of cases.

Yet, they can cause disability, be life-threatening and regrow.

Meningioma’s cause is unknown, however, it has been linked to genetics and breast cancer.

A sufferer’s senses, movement and ability to swallow may be affected.

Meningioma may also cause fits, muscle weakness and severe headaches.

Treatment options include surgery and radio- or chemotherapy.

According to the mother-of-four’s recollection of events, someone jolted her at a junction because they did not see her.

More than 9,000 people are diagnosed with primary brain tumours in the UK each year, according to statistics.

Up to a third of these are a meningioma, a tumour of the tissues that protect the brain and spinal cord.

Mrs Lee-Tubby’s mass, situated behind her right eye, is now being monitored after she opted to ‘watch and wait’. Her next scan is scheduled for this autumn.

Doctors have reportedly told her that surgery is very risky, potentially because it could damage the optic nerve, which controls vision.

It was one of three treatment options she was initially given. The other two were gamma knife surgery and radiotherapy.

She said: ‘Going for the “watch and wait” option it meant I could continue with my life, with the other options in place if needed in the future.’

Her most recent scan in October 2018 found there has been minimal growth of the tumour, meaning she wouldn’t urgently need surgery.

After her diagnosis, Mrs Lee-Tubby and her partner of 33 years, Shawn, 49, decided to get married, which she described as the ‘most magical day’.

She added: ‘It can be difficult to live with but I am doing things most people reserve for retirement and enjoy life to the full.

‘My family have been an amazing support system – especially my sister, Shelly (51) who’s actually battling breast cancer herself.’

Mrs Lee-Tubby and her friends and family have been raising money for Brain Tumour Research and have so far raised more than £2,500.

Despite her tumour, she is determined to keep living her life to the fullest. She said: ‘Keeping a positive mind and enjoying life are key to keeping well.

‘With the help of my friends family and colleagues at work I am able to continue making a difference when I can and offering help to others who are in a similar position.

‘I recently organised a meet up for other brain tumour survivors where we could share stories and inspire each other to continue on with life’s adventure.’

Anyone wanting to donate can do so here.