‘Childbirth saved my life’: Mother, 29, discovers she has cervical cancer after doctors spotted a satsuma-sized lump during labour

A mother-of-two says having her youngest daughter may have saved her life by revealing she had cervical cancer.

Carla Woods, 29, had no idea she was ill because she didn’t have any other symptoms.

And it wasn’t until she was in labour with Freya, now 14 months old, that doctors noticed a tumour near her cervix – and it had already grown to the size of a satsuma.

Mrs Woods has since had chemotherapy and two types of radiotherapy before being given the all-clear in January this year.

She has hailed Freya the family’s ‘little miracle baby’ because, if she hadn’t had her when she did, the cancer could have spread and become more dangerous. 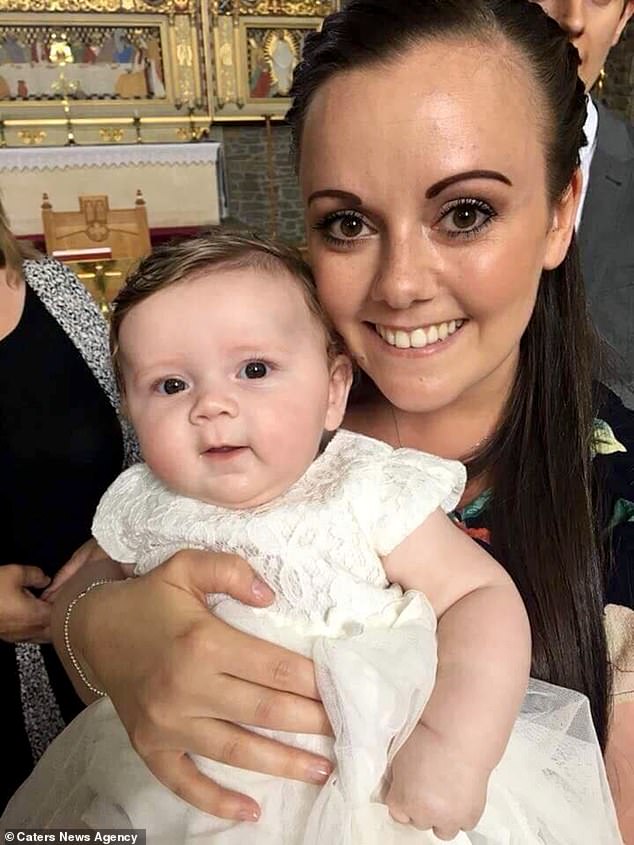 Carla Woods, 29, says her 14-month-old daughter, Freya, is a ‘miracle baby’ because her birth led doctors to realise Mrs Woods had a cancerous tumour inside her vagina

‘It was such a shock for me and my husband, Andrew, when I was finally diagnosed in June 2018,’ said Mrs Woods, a healthcare adviser from Caerphilly in Wales.

‘We had no idea it would be something as serious as cancer.

‘I never missed a smear test. I had one six months after my eldest daughter, Paige, was born but I was due my next one when I was pregnant with Freya which stopped me from having it done.’

Mrs Woods said her midwife at first thought the lump was a fibroid – a non-cancerous lump in the womb – and she told her to book a doctor’s appointment.

But, after further tests, the family were told the lump on her vaginal wall was cancer and needed immediate treatment.

It had already spread to lymph nodes in her groin and was at risk of spreading further.

‘The tumour was already the size of a satsuma and I needed chemotherapy and radiotherapy to get rid of it,’ Mrs Woods said. 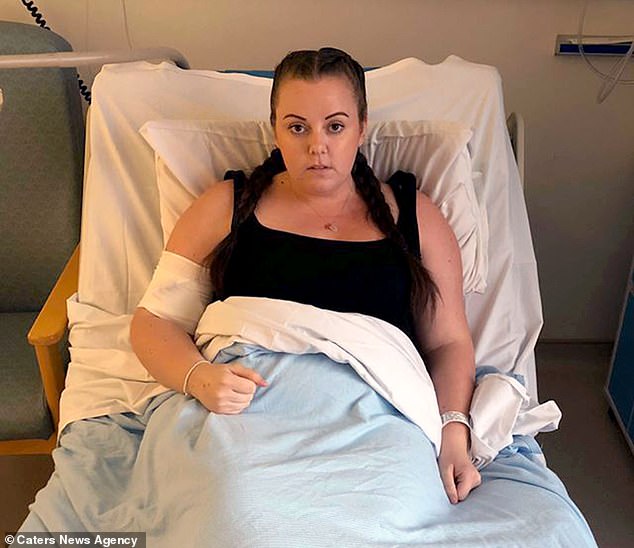 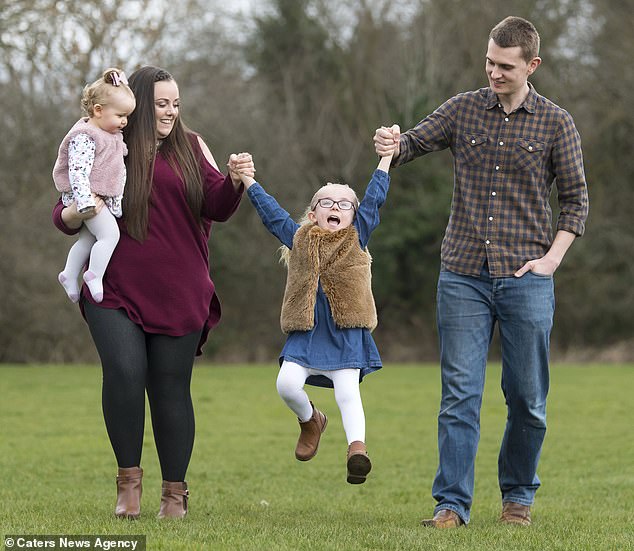 Mrs Woods said the diagnosis was a shock for herself and her husband, Andrew, 31 (Pictured: the couple together with their daughters Paige, four, and Freya)

‘I also had a three week course of internal radiotherapy called brachytherapy.

‘It wasn’t how I’d expected to spend my maternity leave but I was grateful to have caught it early so there was treatment available.’

Brachytherapy is a type of radiation treatment which involves placing a piece of radioactive material inside the body beside the tumour so radiation continuously leaks out into the cancer.

Her treatment has left the mother-of-two infertile but she says she feels lucky to be clear of the disease and is warning other women to go to their smear tests.

Cervical screening is offered for free on the NHS to women in the UK aged between 25 and 64.

The brief test checks for changes to cells in the cervix which can reveal whether someone is at higher risk of developing cancer in the future. 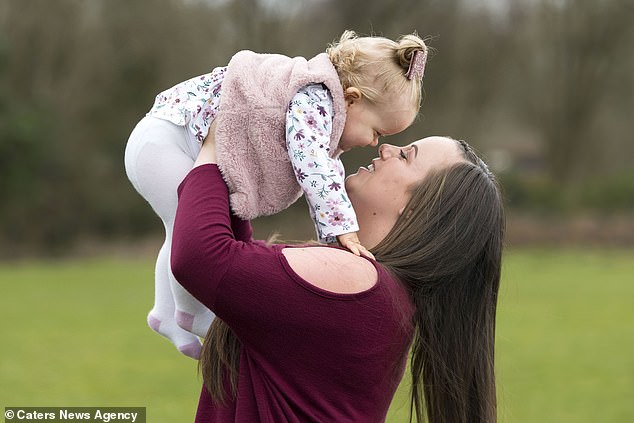 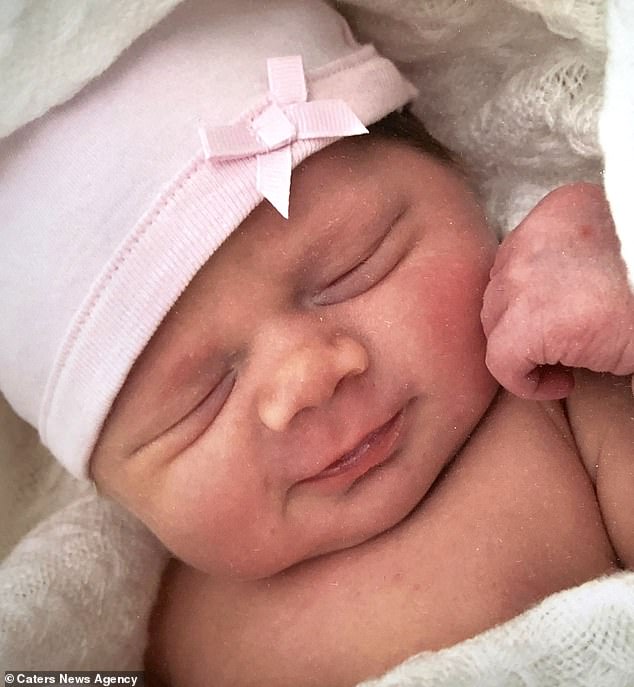 Mrs Woods didn’t have any other symptoms of cancer, such as pain or bleeding, so would not have noticed she was ill if it wasn’t for her daughter, Freya (pictured as a newborn) 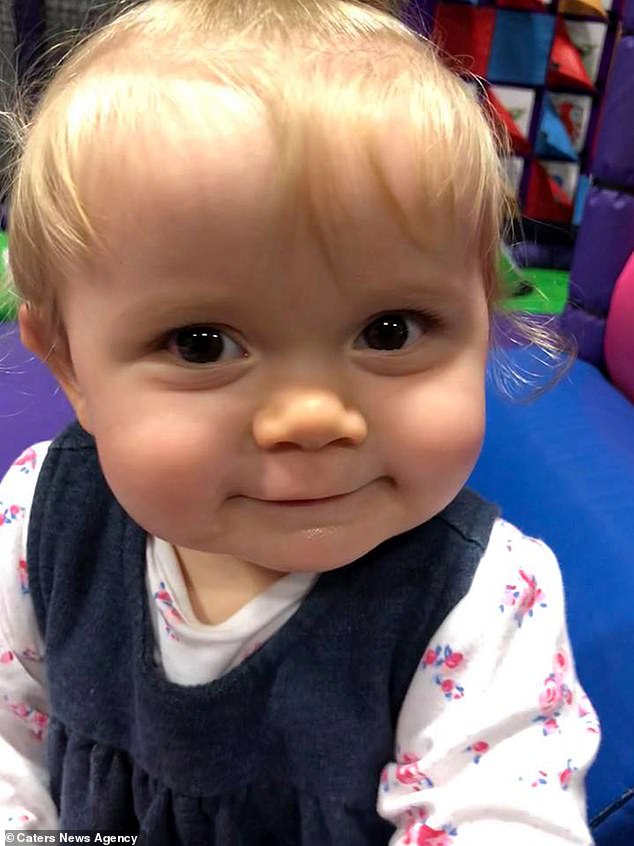 Freya, now 14 months old, will likely be the last child Mrs Woods can have naturally, because the radiation and chemotherapy treatments have left her infertile 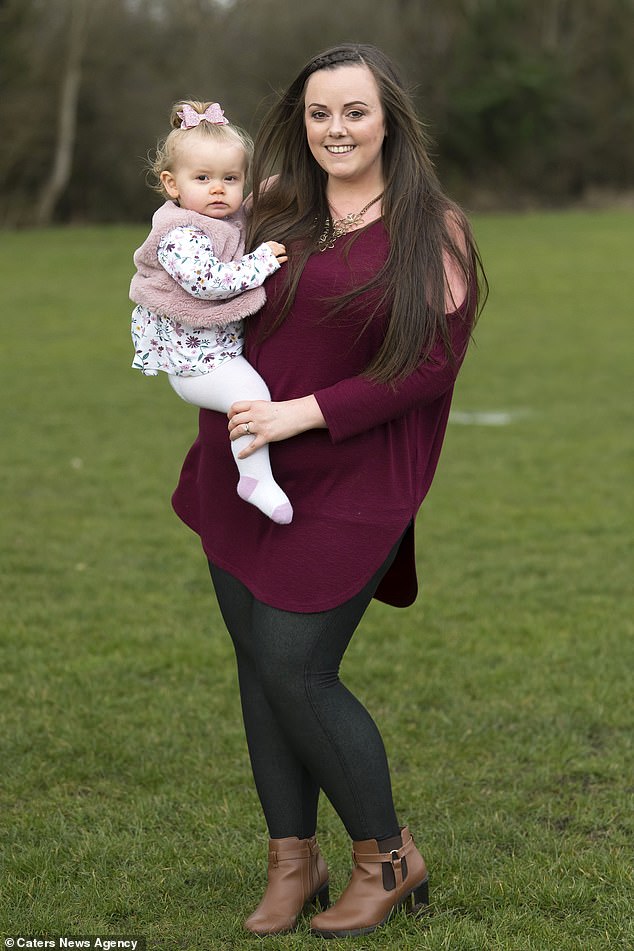 Mrs Woods, a healthcare adviser from Caerphilly, Wales, is now warning other women to make sure they have regular smear tests – she didn’t have her most recent one because she was pregnant but it would have flagged up her illness

Mrs Woods said: ‘I didn’t have any of the usual symptoms that are typical of cervical cancer – for example, bleeding or back or pelvic pain.

‘So if I’d not been giving birth, the tumour would have continued to grow which is why I’m so thankful to Freya.

‘People think they’re invincible but it can happen to anyone which is why smear tests are so important.

‘Smear tests help detect cancer even when there’s no symptoms at all.

‘I have been left infertile by the cancer treatment as it has caused my body to be in early menopause but I’m so happy to now be cancer-free.’

And she thanked the health workers at the hospital where she was treated, adding: ‘I can’t thank the staff at the Velindre Cancer Centre in Cardiff for all their support during and after treatment as well as my friends and family. 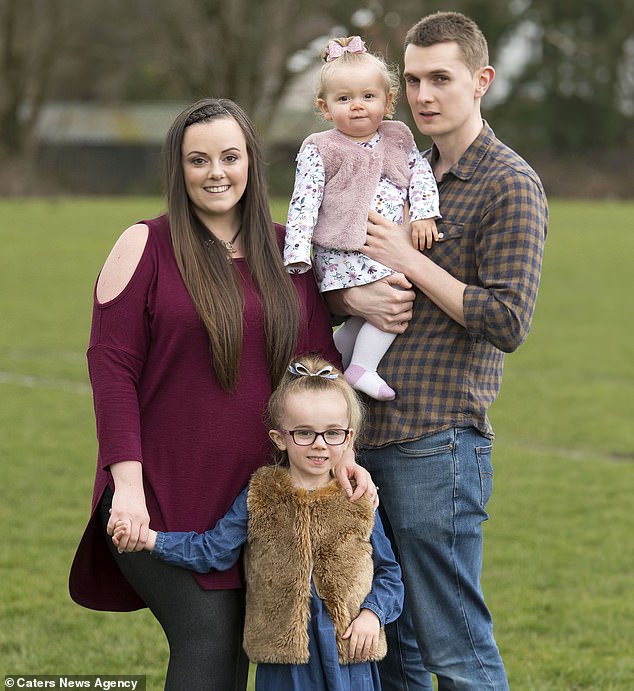 Mrs Woods, pictured with her husband Andrew and their daughters, added: ‘I can’t thank the staff at the Velindre Cancer Centre in Cardiff for all their support during and after treatment as well as my friends and family’

‘I’m now sharing my story as a warning to other women and raise awareness for cervical cancer.’

More than 3,000 women are diagnosed with cervical cancer each year in the UK, and around 850 die annually.

Almost all cases of the illness (99.8 per cent) are preventable and most are caused by a virus called HPV, which can be spread through sex and affects around eight in 10 people.

A vaccination programme immunising girls – and, from this year, boys – against HPV while they’re at school is expected to wipe out cervical cancer within decades.

WHAT IS A SMEAR TEST?

A smear test detects abnormal cells on the cervix, which is the entrance to the uterus from the vagina.

Most test results come back clear, however, one in 20 women show abnormal changes to the cells of their cervix.

In some cases, these need to be removed or can become cancerous.

Being screened regularly means any abnormal changes in the cells of the cervix can be identified at an early stage and, if necessary, treated to stop cancer developing (stock)

Cervical cancer most commonly affects sexually-active women aged between 30 and 45.

In the UK, the NHS Cervical Screening Programme invites women aged 25-to-49 for a smear every three years, those aged 50 to 60 every five years, and women over 65 if they have not been screened since 50 or have previously had abnormal results.

Women must be registered with a GP to be invited for a test.

In the US, tests start when women turn 21 and are carried out every three years until they reach 65.

Changes in cervical cells are often caused by the human papilloma virus (HPV), which can be transmitted during sex.

In January 2018, women shared selfies with smeared lipstick on social media to raise awareness of the importance of getting tested for cervical cancer in a campaign started by Jo’s Cervical Cancer Trust.