A mother has claimed doctors branded her ‘inhumane’ for not aborting her twins after her waters broke 16 weeks into pregnancy.

Hannah Morris, 27, from Washington, Tyne and Wear, was devastated when she lost her amniotic fluid, medically named preterm prelabour rupture of the membranes (PPROM).

She claims an E. coli infection that a midwife decided not to treat may have caused her waters to break 24 weeks early.

The mother-of-three acted on a ‘gut instinct’ and refused to follow the doctors’ advice to abort despite allegedly being told her babies would die or be disabled. 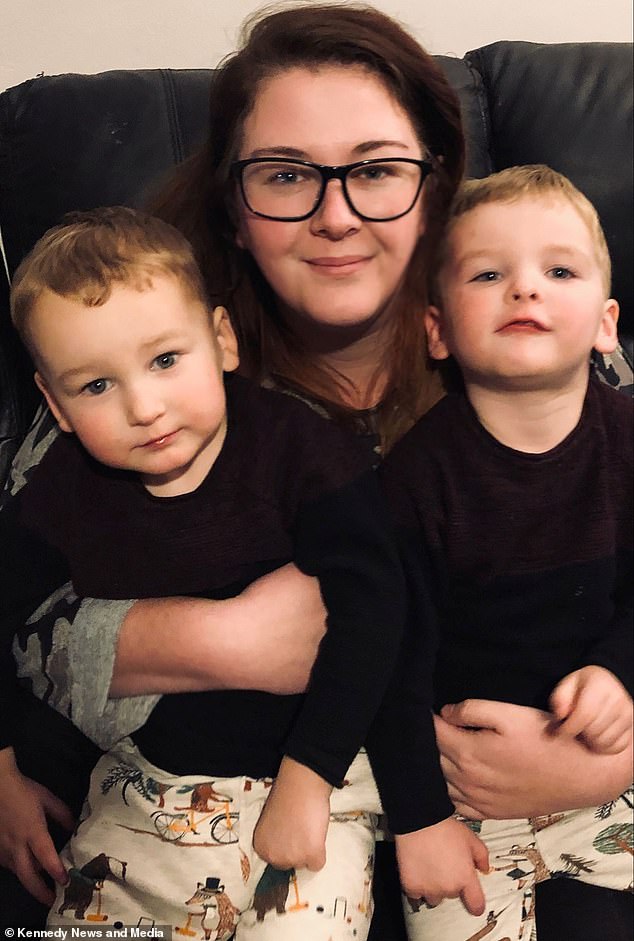 Hannah Morris, 27, from Washington, Tyne and Wear, claims doctors branded her ‘inhumane’ for not aborting her ‘100% goner’ twins, George and Alife, now two-years-old 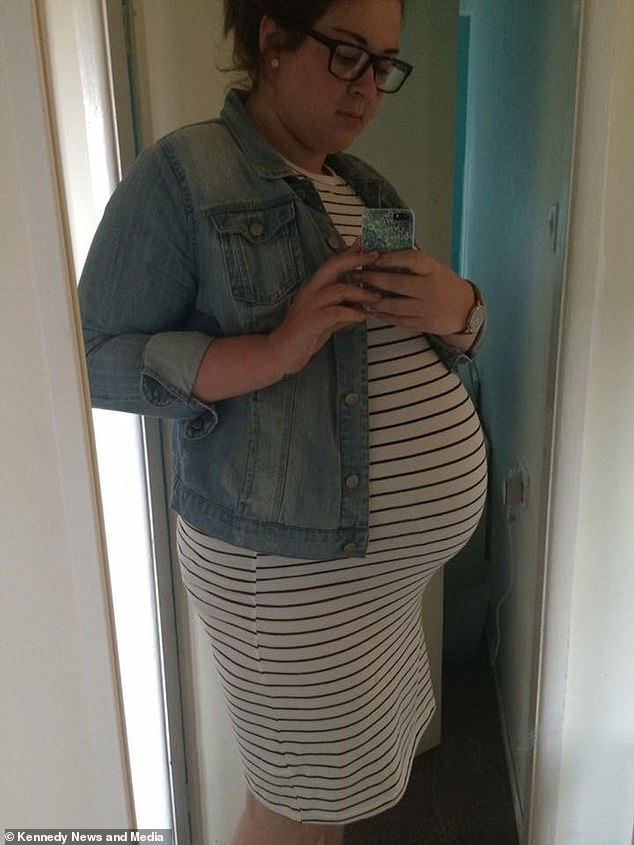 Ms Morris was devastated when she lost her amniotic fluid, medically named preterm prelabour rupture of the membranes (PPROM) at 16 weeks pregnancy 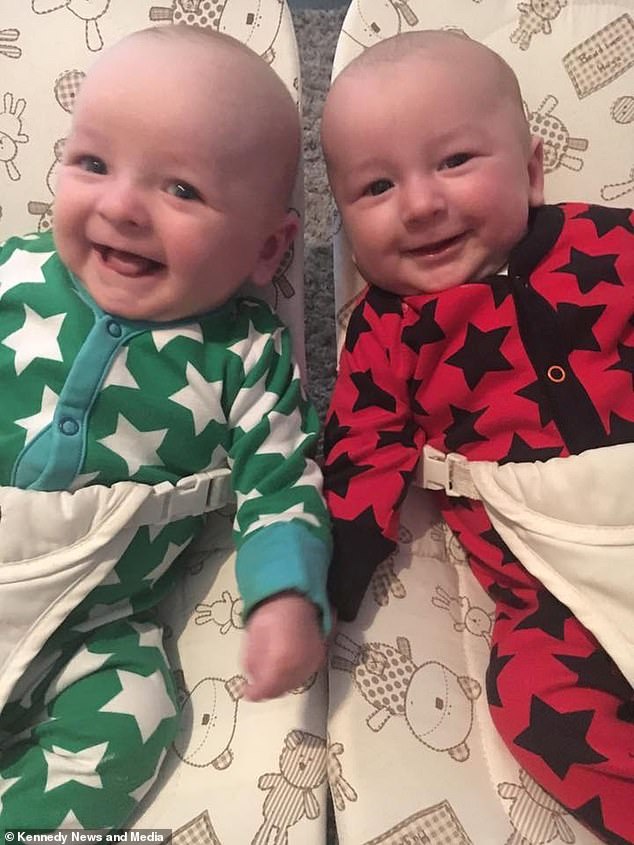 Ms Morris believes the NHS would have rather have ‘got rid’ of her babies, pictured, for ease than treat them when they were born with potential disabilities

For the remainder of her pregnancy after being diagnosed with PPROM, Ms Morris drank eight litres of water a day and stayed in bed to avoid losing any more fluid.

At 34 weeks, she gave birth to George and Alfie King via C-section, and both are now healthy two-year-olds.

Ms Morris, who had her children with partner, Mark King, a healthcare professional, 30, said: ‘The negativity from the NHS was absolutely abominable.

‘A lot of the doctors had not got a clue what to do with me.

‘It was like it was their get out clause to say “have a termination” because it was easier to say get rid of the babies than to actually treat PPROM.’

Women’s waters normally break around the time labour is due, at 37 weeks, but in around two per cent of pregnancies they break early for various reasons.

This triggers early labour in many women, but around six per cent of women do not give birth straight away.

But the risk of maternal and foetal infection increases the longer the time between membrane rupture and the onset of labour.

Pre-term pre-labour rupture of the membranes happens in expectant mothers who are less than 37 weeks pregnant.

Most women will go into spontaneous labour within 24 hours of rupturing their membranes.

But six per cent of women do not go into labour within 96 hours.

The earlier into the pregnancy the rupture occurs, the less likely it is that the onset of labour will be within a specified time period.

The condition is associated with 40 per cent of preterm deliveries and can lead to high morbidity and mortality.

An expectant mother may describe feeling a ‘popping sensation’ of a ‘gush’ with continuous watery liquid draining.

A woman will be taken into hospital immediately and admitted in many cases for the at least 48 hours.

In most cases delivery should be considered at 34 weeks.

It is recommended that women diagnosed with PPROM should not exceed 96 hours after their membrane has ruptured. The risk of maternal and fetal infection increases the longer the time between membrane rupture and the onset of labour.

Ms Morris said: ‘The compassion that they had in that situation was so cold and so negative that when I was trying to fight for my babies’ lives it felt like they didn’t care.

‘I understand the NHS is under massive strain and they’re trying to make savings, but I was trying to save my babies.

‘They completely failed me. If I had listened to these people I would have terminated my pregnancy and my sons wouldn’t be here today. It’s devastating.’

Ms Morris, a stay-at-home mother who also has a six-year-old daughter, and Mr King were over the moon when they found out they were going to have twins in January 2016.

A urine sample taken at Ms Morris’s 12-week scan revealed that she had an E. coli infection.

But Ms Morris claims the midwife opted not to offer antibiotics because she didn’t have symptoms, instead believing the infection would go away on its own.

Ms Morris said: ‘At the beginning, if that midwife would have just given me three days of antibiotics then my waters would not have broken.

‘As a midwife told me that, I’m going to take her word for it and that was that, I didn’t think anything else of it.

‘Everything just comes back to that one midwife not treating me for the infection.

‘I think she made a massive error in judgement, but the NHS in itself has such a negative outlook on PPROM and they also don’t know what the protocol is.’

Then, Ms Morris’ waters broke a few weeks later, and she was rushed to hospital in Bolton.

The couple were heartbroken when they were warned that neither child had any chance of surviving because they were vulnerable to infection.

Ms Morris said: ‘I had an internal examination and the doctor told me that my waters had broken, and he was really sorry but there was nothing they could do for us.

‘I asked a million questions – can the other baby survive? Can it reseal?

‘They said, “No, there was a 100 per cent chance that this baby won’t survive and you need to have to have some medicine to induce labour. It’s your only option”.’ 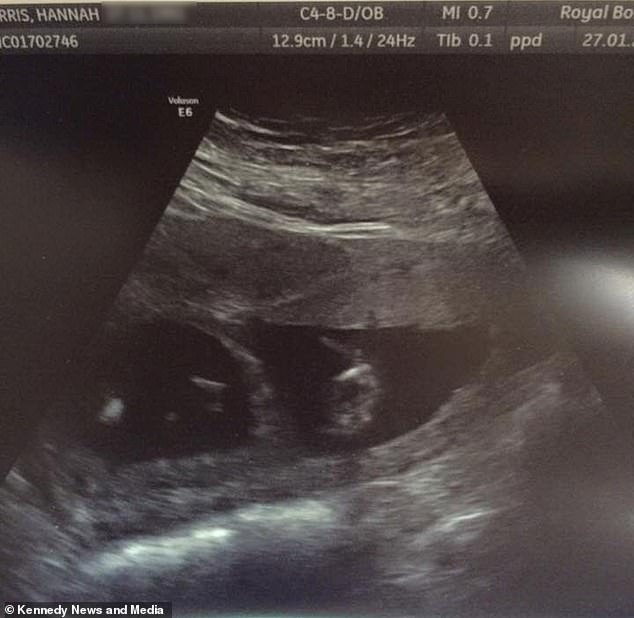 Ms Morris claims an E. coli infection found by a midwife at her 12 week scan (picture), which was decided not to be treated, may have caused her waters to break 24 weeks early 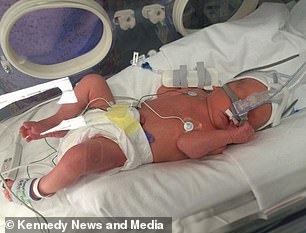 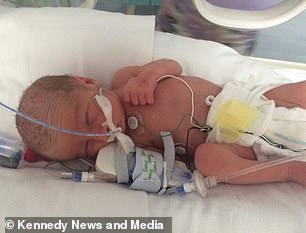 Alfie and George were born via C-section at 34 weeks old and spent four days in a neonatal intensive care unit. Alfie was born with holes in his heart and George suffered a weakened immune system due to his premature birth 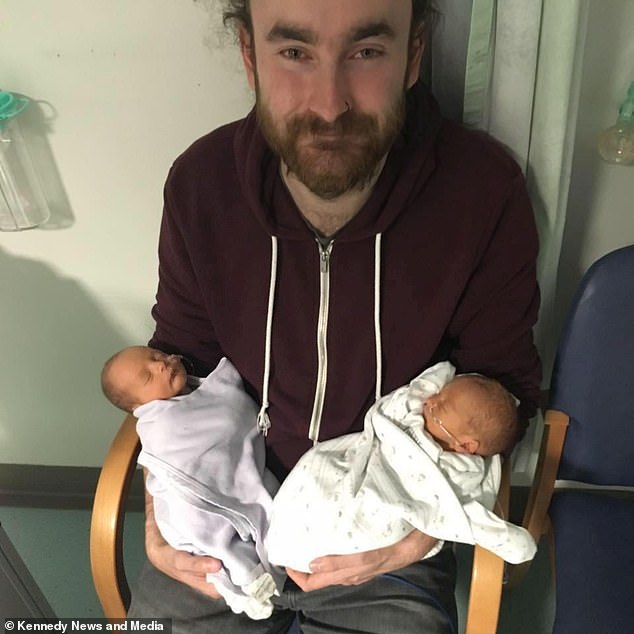 Doctors continuously urged Ms Morris and her partner, Mark King, 30, to abort their children because their vital organs would not develop properly and their limbs would be stuck together

Ms Morris said: ‘For some reason, I don’t know why, I didn’t want to do that [abort]. My gut was telling me not to follow the advice.

‘I knew nothing about PPROM. I didn’t know it was a thing before then. I just rejected all the medical advice.

‘I said if I am going to lose them I lose them naturally and I’ll let nature take its course.

‘The doctor left me in this side room and not one single doctor or nurses or healthcare professionals came in this room for 48 hours. They just left me and my partner to miscarry our children.’

But, after two days of waiting in hospital to miscarry, a scan revealed that both babies appeared healthy and the couple were sent home.

Ms Morris said: ‘A week after I was first in hospital I had a follow-up appointment and we met with a doctor who put a care plan in place for us but told us if they got to 24 weeks, which is viability, their limbs would be stuck to their bodies.

‘Choosing to carry on was immensely inhumane and was the worst thing I could do because my babies were 100 per cent goners.

‘[They said] I was only causing them more pain by carrying on with the pregnancy.

‘We were considering at this point terminating the pregnancies because this was coming from top consultants.’

The couple went home and decided to do their own research.

Ms Morris turned to voluntary organisation Little Heartbeats for support and decided to put herself on bed rest to give her babies the best chance of survival. 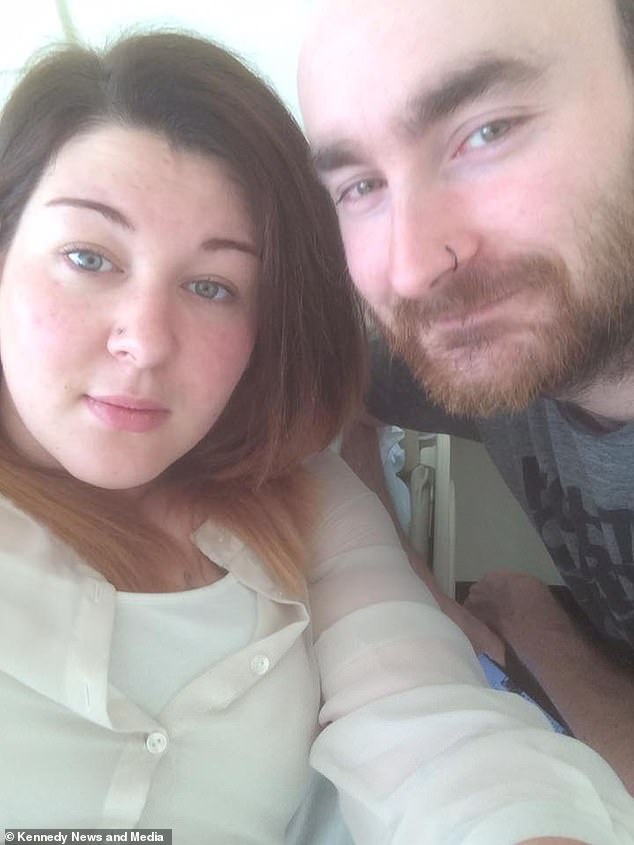 Acting on ‘gut instinct’ Ms Morris and her partner did their own research at home. Ms Morris rested in bed for the remainder of her pregnancy, avoiding any more fluid loss 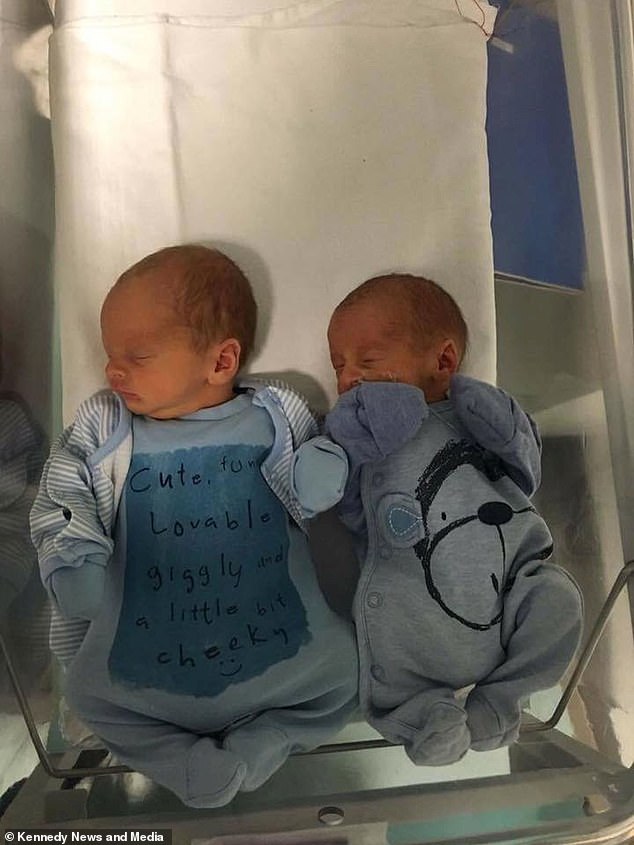 Ms Morris said: ‘They completely failed me. If I had listened to these people I would have terminated my pregnancy and my sons wouldn’t be here today. It’s devastating’

She would lose water every time she moved and found even simple tasks such as going to the toilet extremely difficult.

She avoided baths and swimming pools and drank up to eight litres of water a day to keep her water supplies as replenished as possible.

The situation was extremely challenging for the family, who say they felt isolated during the pregnancy.

Each week they were reassured by a scan that showed that the babies were healthy, pushing them to carry on.

But Ms Morris claims the doctors repeatedly told her it was unlikely the babies’ vital organs would develop properly and their limbs would be stuck together.

Abortions can be carried out after the usual 24 week cut off point in certain circumstances – for example, if the mother’s life is at risk or the child would be born with a severe disability.

Against all the odds, Ms Morris made it to 34 weeks and planned a C-section with her doctors.

George was born first weighing 5lbs 4oz and Alfie at 4lbs 1oz, and both spent four days in a neonatal intensive care unit. 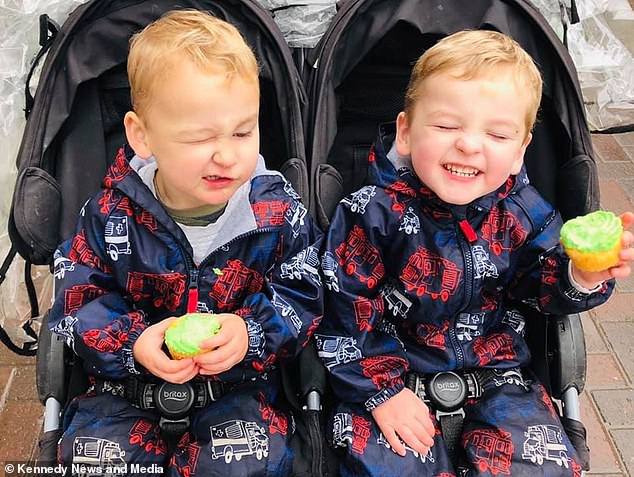 The twins, Alfie, left, and George, right, are now healthy and two-years-old

Despite Alfie being born with holes in his heart and George suffering a weakened immune system due to his premature birth, both toddlers are now healthy and thriving.

Ms Morris said: ‘Taking our boys home was amazing. Just to know that we were right and that we had made the right decision by our children.

‘They had defeated all the odds and they were strong, healthy little boys. They are now so cheeky and you look at them and think, wow, you nearly weren’t here.’

Ms Morris is now speaking out to call for better education for doctors and awareness for the public on the pregnancy complication.

‘You trust your doctor and what they say to you think is going to be the right option. You trust the medical professionals that are looking after you.

‘There just needs to be more awareness. So if a parent does find themselves in a situation like mine then they know where to turn.

‘But if they have support from other parents who know what they’ve been though it’s going to make the experience easier for them.’

Ciara Curran, founder of Little Heartbeats, said: ‘Hannah and her little surviving PPROM babies are living proof these babies can survive with little to zero fluids.

‘These babies clearly demonstrate why we need to raise awareness of PPROM, and that terminating the pregnancy is not the only option, as these are just a few of the many babies who have survived.

‘We are seeking to ensure our families have access to the information required to make informed decisions about their PPROM pregnancy.

‘All too often they are told there is no hope and that their only option is to terminate, but babies can and do survive this.’

A spokesperson for Bolton NHS Foundation Trust said: ‘We are really sorry to hear about this. We do not comment on individual cases. However, we would be happy to meet with Hannah to discuss directly with her.’