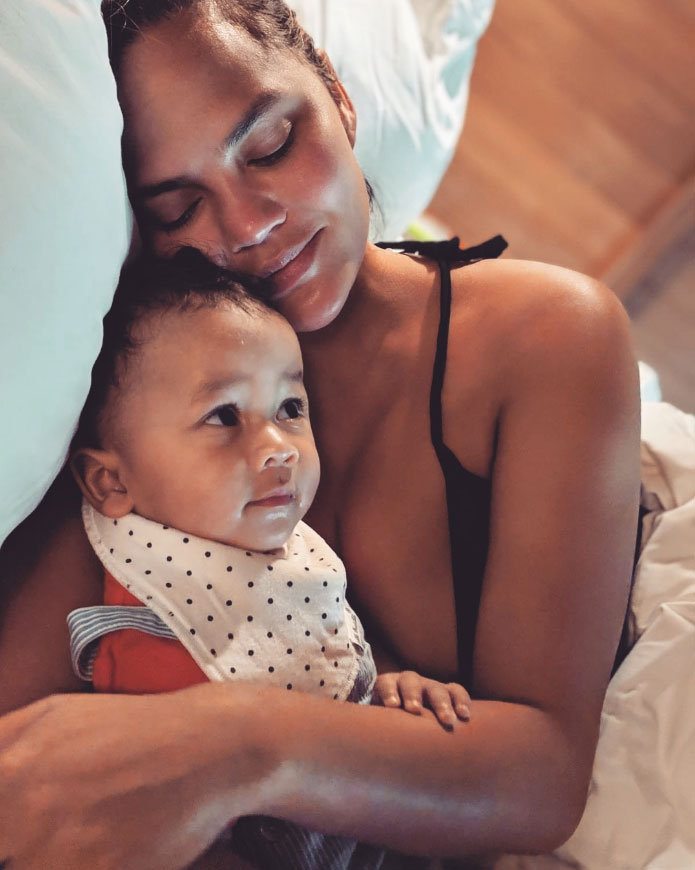 He’s got it! Chrissy Teigen revealed her son Miles’ first word, allowing the 13-month-old to demonstrate his adorable skill to her followers.

“When your first word is ‘yeah!’” the Cravings author, 33, captioned an Instagram video of the little one on Thursday, June 20. In the video, Miles repeats the word each time Teigen’s mom, Vilailuck Teigen, asks whether he loves a certain family member, including his mom, his dad, John Legend, and older sister Luna, 3.

when your first word is “yeah!”

Chrissy compared her youngest child to the Voice coach, 40, adding in the comments section: “Luna’s first word was ‘no’. They’re exactly us.”

The Lip Sync Battle cohost previously teased that Miles was “so close” to saying his first word. She encouraged her baby boy to say “Dada” in a February Instagram video. He eventually worked up to saying “Mama” by May, but it appears the common first word for babies was not his.

Earlier this week, Chrissy took on mom-shamers who criticized her for postponing Luna’s first dentist appointment. The model posted via Instagram on Tuesday, June 18, that she was “so proud” of her daughter for nailing the visit.

When another Instagram user commented, “What age do they start over there? My daughter started seeing a dentist at a yr [sic] old,” Chrissy fired back, “Was waiting for this. U guys never fail me.”

Legend stood up for his wife, asking that haters place blame on the parents equally. “On our first date after Luna was born, everyone critiqued her,” the EGOT winner told Us Weekly earlier this month. “’Why are you going out two weeks after your baby was born?’ But they didn’t critique me. … Hopefully people are learning that Chrissy and I are a partnership and if you’re going to parent-shame us, do it to us as a partnership.”