Birth defects are linked to cancer, study finds: Affected children ‘are up to 12 times more likely to develop the disease by age 18’

Children with birth defects are between two- and 12-times more at risk of developing a childhood cancer, new research suggests.

Scientists have long recognized the link between birth defects related to genetic material in the chromosomes and childhood cancers.

But the tie between other birth defects and cancers weren’t clear, beyond anecdotal observations.

A new study of more than 10 million births conducted by Baylor College of Medicine uncovered a nearly undeniable link, showing that children with non-chromosomal birth defects are at a four-fold greater risk of getting cancer before age 18. 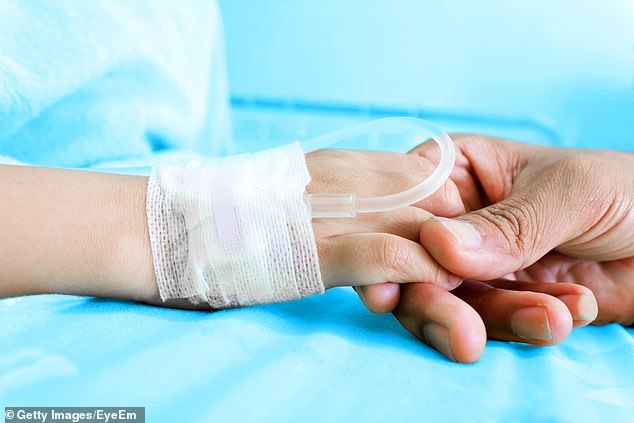 Children born with birth defects of unclear origins are at a 2.5-fold greater risk of pediatric cancer and those with chromosomal, genetic defects are at 11.6-fold higher risks

‘Birth defect’ is a catch-all term for a broad range of abnormalities.

It includes any difference to the structure of any part of a baby’s body, which could be anything from a slightly misshapen toe to extensive brain changes.

These defects only have an identifiable cause about 30 percent of the time.

For the other 70 percent of birth defects, doctors have to send distressed and confused parents away with no clear explanation.

And children that suffer from these birth defects are indeed at greater risk of cancer, according to the new study, published today in JAMA Oncology.

The Baylor College of Medicine researchers analyzed data on over 10 million live births, among which 2,123 had birth defects that were not explained by chromosomal abnormalities.

The small proportion of children born with non-chromosomal defects were 2.5 times more likely to develop a cancer before their 18th birthdays.

Such defects didn’t raise their risks as much as chromosomal defects would have – children born with these abnormalities are 11.6 times more at-risk for pediatric cancers, the study found – but they do make a significant difference.

Depending on the type and number of birth defects, the cancer that children are at-risk of developing varies too.

Down’s syndrome, a chromosomal abnormality, has long been linked to a 20-fold increased risk for a particular kind of leukemia.

According to the editorial accompanying the new study, scientists believe that most childhood cancers actually begin to develop while a child is still in the womb.

For this reason, they also believe that cancers and birth defects may share a genesis, during fetal development.

The new study backed that notion up, says Dr Philip Lupo, a pediatric oncologist at Baylor and co-author of the study.

‘I was struck with the type of cancers we would see with non-chromosomal defects: neuroblastoma and hepatablastoma,’ he says.

‘It’s notable because [these] cells have embryonic origins.

‘It’s not surprising that we might see tumors in embryonic cells being associated with birth defects that are non-chromosomal.’

It didn’t matter what organ systems or body part a child’s non-chromosomal defects affected, their cancer risks were fairly uniform although those with hear and craniofacial abnormalities had higher rates of neuroblastoma.

On the other hand, sarcoma and osteosarcoma were not strongly linked to birth defects.

‘By identifying the overlap between these two conditions, we hope we will get more insight into how they happen and what could be the common genes,’ says Dr Lupo.

‘Even in the absence of known chromosomal anomalies, it doesn’t mean it’s not genetic, it probably just means we don’t know what those genes are.

‘We think of [non-chromosomal defects] as sporadic, but that doesn’t mean they’re not genetic.’

Although being born with a birth defect of any kind significantly raises the risks that a child will develop a cancer, that doesn’t mean these children are individually at high risk.

‘The good news is that childhood cancer is very rare,’ said Dr Lupo.

‘Even though we might see an elevated relative risk in the children in this study, their likelihood of developing cancer is still very small.’

He hopes that this study might be an early stop along the path to preventing childhood cancers with developmental origins, and perhaps even toward combating birth defects.

‘By digging into some of these patterns, what we hope to find are novel clues as to why they occur,’ says Dr Lupo.

‘If we study these, we can learn more not only about childhood cancer but about birth defects.’