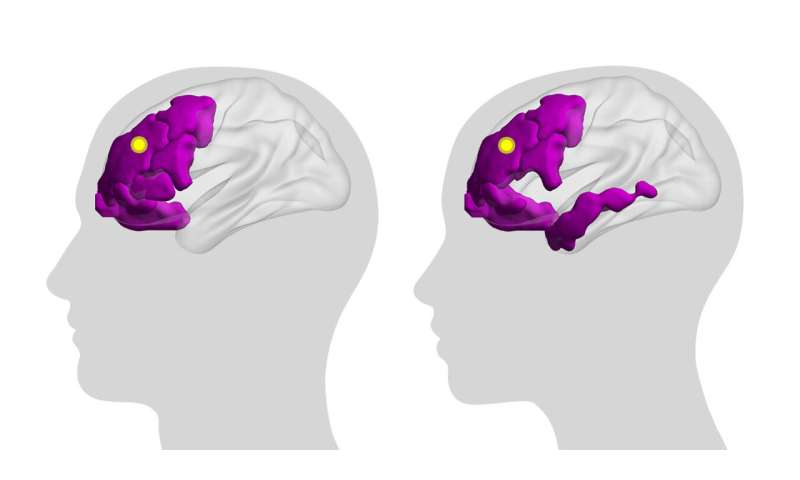 Like instruments in an orchestra, different parts of the human brain work together to help us perform the functions of daily life, ranging from breathing and sleeping to reading, walking and learning.

But which areas of the brain work in harmony to accomplish certain types of tasks? And how does this coordination vary from person to person?

A new study that will be published on April 3 in Science Advances explores these questions.

The research focuses on brain activity associated with nine cognitive systems within the brain, each consisting of a network of brain regions linked to certain functions. The auditory system, for example, helps us process sound, whereas the ventral temporal association system is thought to help us recognize objects, faces, colors and more.

“We’re using computational modeling to investigate the inner workings of the brain,” says Sarah Muldoon, Ph.D., University at Buffalo assistant professor of mathematics. “When one region of the brain is stimulated, what other regions become active, and how do these patterns of synchronization get distributed across cognitive systems?”

The study and all information in this press release are embargoed until 2 p.m. U.S. Eastern Time on Wednesday, April 3.

Muldoon led the collaborative study with Kanika Bansal, Ph.D., who completed the work as a joint postdoctoral mathematics researcher at UB and the U.S. Army Research Laboratory (ARL). Bansal is now a postdoctoral researcher with ARL and Columbia University.

To complete the study, researchers mapped how different regions of the brain were connected to one another in 30 different people via tracts of tissue called white matter. (The specific connectivity pattern linking different brain regions varies between individuals.)

Next, the scientists converted these maps into computational models of each subject’s brain, and used computers to simulate what would happen when a single region of a person’s brain was stimulated. The researchers then used a mathematical framework, which they developed, to measure how brain activity became synchronized across various cognitive systems in the simulations.

The study had two broad findings:

Probing the architecture of the mind

The findings could be useful to cognitive scientists and health care professionals. The study demonstrates, for example, why it may be important for brain stimulation, a disease treatment technique, to be both highly precise in terms of the location stimulated, and personalized for different individuals.

“The brain is very dynamic,” Bansal says. “Connections between different regions of the brain can change with learning or deteriorate with age or neurological disease. Connectivity also varies between people. Our research helps us understand this variability and assess how small changes in organization of the brain can affect large-scale patterns of brain activity related to various cognitive systems.”

The study points to computational modeling as a powerful tool in cognitive science.