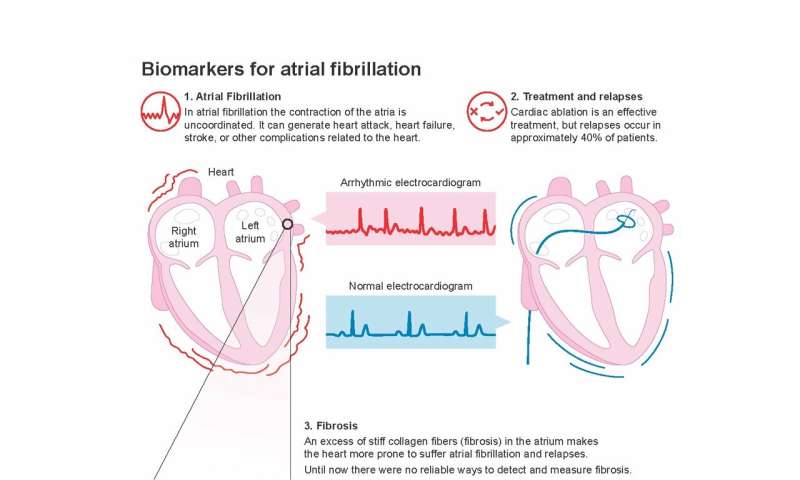 Scientists at the University of Navarra (Spain), in collaboration with clinicians from the University Hospital of Donostia, have identified two biomarkers associated with the risk of suffering atrial fibrillation, a cardiac ailment that affects more than 33.5 million people globally. In the European Union, it is present in 8.8 million people over 55 years of age and in Spain, it affects more than 4 percent of the population over 40 years of age. The World Health Organization considers this disease as an epidemic due to its high morbidity and mortality, and a public health problem due to its high prevalence.

Atrial fibrillation is the most common alteration of heart rhythm (arrhythmia). It happens when the heart pumps blood in an accelerated and irregular way, thus increasing the risk of suffering a heart attack, heart failure, stroke, or other complications. Some common causes are heart disease or hormonal changes. It can be treated with medications and procedures such as cardiac ablation to correct irregular heart rhythms.

Researchers at Cima, Clínica Universidad de Navarra and the Faculty of Sciences, have predicted the appearance of this cardiac ailment via blood sample analysis. “The alteration of three molecules related to collagen metabolism (CITP, MMP-1, and PICP) determine the risk of suffering atrial fibrillation and the response to its treatment,” explains Dr. Javier Díez, director of the Cardiovascular Disease Program at Cima, Head of Research of the Department of Cardiology and co-director of the Department of Nephrology at the Clínica Universidad de Navarra.