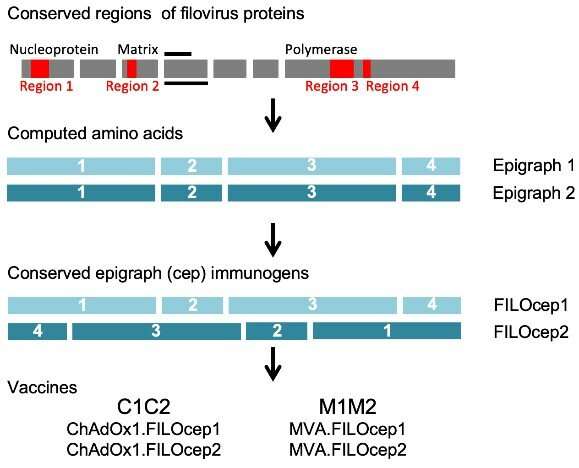 Vaccines that induce protective T-cell responses could protect against members across the filovirus family, according to a study published February 28 in the open-access journal PLOS Pathogens by Tomáš Hanke of the University of Oxford, Bette Korber of the Los Alamos National Laboratory, and colleagues.

Developing an effective vaccine against filovirus outbreaks is an important public health aim. Vaccine candidates being developed for a small number of filoviruses that most commonly cause outbreaks all employ the virus glycoprotein as the vaccine immunogen, which triggers a protective immune response. However, antibodies induced by such glycoprotein vaccines are typically limited to the other members of the same filovirus species. By contrast, T-cell vaccines offer the possibility to design a single pan-filovirus vaccine that protects against all known and even likely existing, but as yet un-encountered, members of the filovirus family. In the new study, Hanke and colleagues constructed vaccines using cross-filovirus immunogens—conserved regions of filovirus proteins—with the aim of inducing protective T-cell responses against viruses across the filovirus family.

The authors demonstrated that T-cell responses can protect two strains of mice against a high lethal virus challenge in the absence of glycoprotein antibodies. Moreover, a single T-cell vaccine can do so against distant members of the filovirus family: Ebola and Marburg viruses. This suggests the possibility that this candidate vaccine also protects against other known, as well as yet un-encountered, viruses of the filovirus family. According to the authors, a successful pan-filovirus vaccine would have multiple uses, such as generating vaccine stockpiles to contain future outbreaks, eliminating the 2013 and 2018 outbreak remnants, eliminating virus reservoirs in survivors, providing long-term protection in high-risk populations including health workers, and even saving highly endangered western gorillas.