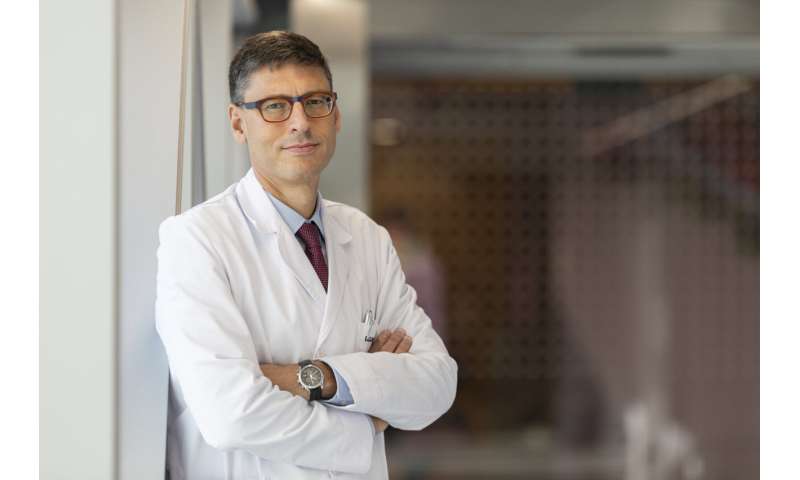 An international study demonstrates that administering niraparib after conventional chemotherapy treatment in patients newly diagnosed with advanced ovarian cancer, improves their progression-free survival, and reduces their risk of relapse or death from this disease. The Primary Investigator of this study is Dr. Antonio González Martín from Clinica Universidad de Navarra (Spain) and president of the Spanish Ovarian Cancer Research Group (GEICO). The New England Journal of Medicine, the world-leading medical journal, published the research in its online last issue.

“We evaluated in this study the benefits of using niraparib after standard treatment of ovarian cancer based on chemotherapy after surgery. With this new therapeutic approach we have observed a significant improvement in patient progression-free survival and a reduction of almost 40% of their risk of relapse”, says Dr. González Martín, first author of the article.

Ovarian cancer is diagnosed every year around 205,000 women worldwide, is the fifth leading cause of cancer death in women in Europe. It is usually diagnosed between 45 and 75 years, although there is a significant number of patients from 30 years. It is the gynecological tumor that causes more deaths because most patients are diagnosed in an advanced stage of the disease, given the absence of early diagnostic techniques. In turn, up to 80% of those affected by advanced ovarian cancer relapse after treatment with surgery and chemotherapy. “This research arises from the need to look for new strategies and alternative therapies that increase the survival of patients with this disease,” says the expert.

The study was presented at the Annual Congress of the European Society for Medical Oncology (ESMO) held in Barcelona from September 27th to October 1st. The research analyzed 733 newly diagnosed patients with advanced ovarian cancer (with serous histological type, or endometrium of high grade). The phase III clinical trial, conducted in 181 international centers, was coordinated by the Spanish Ovarian Cancer Research Group (GEICO), which is part of the European Network of Gynaecological Oncological Trial Groups (ENGOT), associations of which Dr. González Martín is also president.

The work consisted of adding niraparib after the conventional first-line chemotherapy treatment for these patients after surgery. Niraparib is a potent PARP inhibitor drug (an enzyme involved in DNA repair and cell death) that is used as maintenance therapy in women with ovarian cancer relapse, whether or not they have mutated the BRCA gene (associated with the risk of suffering from this disease). In turn, the effect of this treatment was also studied in patients with a type of defect in DNA repair called homologous recombination deficiency (HRD). In patients who did show this deficiency (half of the women in the study), the benefit of treatment was even more significant, achieving a 57% reduction in the risk of relapse or disease progression.

The safety profile of the drug was similar to that observed in other trials with niraparib. The study was funded by TESARO, a company belonging to the pharmaceutical company GlaxoSmithKline (GSK).