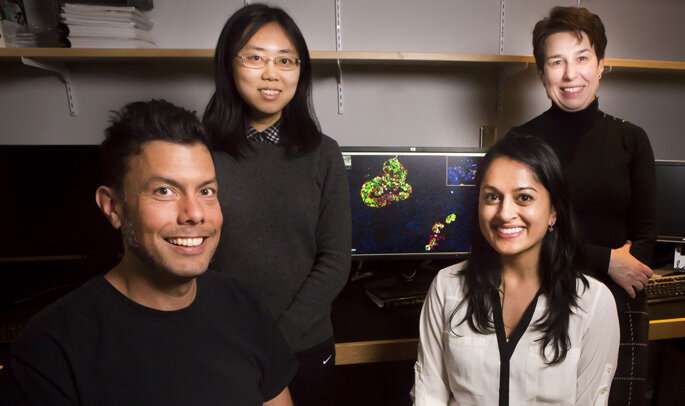 Vanderbilt University Medical Center researchers say an unexpected finding during the cellular analysis of human pancreatic tissue has revealed new information about a rare type of diabetes and underscores the importance of genetic testing for some individuals diagnosed with type 1 diabetes.

The research centers on discoveries made from the pancreatic tissue from a 33-year-old male donor who had been diagnosed with and treated for type 1 diabetes for 17 years before his death. The team is also hopeful that their study, published this month in the Journal of Clinical Investigation, will positively impact the future health of the tissue donor’s family, as well as others diagnosed with this rare form of diabetes.

Using Vanderbilt infrastructure to study the human pancreas and islets from individuals with diabetes, Vanderbilt investigators have made recent discoveries about the causes of diabetes. As a part of these studies, Rachana Haliyur, Ph.D., saw something surprising under the microscope in stained images of one donor’s tissue—green areas that indicated the unexpected presence of abundant insulin-producing cells. This led her to question if this individual truly had type 1 diabetes.

“In type 1 diabetes, insulin-producing beta cells are infrequent and difficult to find, especially after 17 years of disease, but this donor had a lot of beta cells,” said Haliyur, who is currently completing her medical degree as part of the Vanderbilt Medical Scientist Training Program (MSTP). “Actually, his beta cell numbers were within the range of normal, yet clinically, he presented like he didn’t have insulin-secreting beta cells and required insulin treatment.”

Diabetes develops when a person’s pancreas either makes too little insulin, as in type 1 diabetes, or a person has reduced insulin output and responds poorly to insulin, as in type 2 diabetes. This leads to high levels of sugar in the bloodstream. While type 1 and type 2 are the most prevalent forms of diabetes, research has revealed that up to 4 percent of individuals with diabetes have an inherited form of the disease caused by a single gene (monogenic) mutation.

Because of their unexpected findings, in collaboration with investigators at the University of Chicago, the Vanderbilt team tested the donor’s DNA for genes associated with monogenic diabetes and discovered a pathogenic HNF1A variant. Variations in the HNF1A gene—known to play an important role in the pancreas, liver and kidney—are responsible for the most common form of monogenic diabetes.

However, they also found that other pathways of insulin release were maintained and could be stimulated. They suggested targeting one of these pathways for insulin secretion, by using medications known as glucagon-like peptide-1 (GLP-1) agonists, most commonly used to treat type 2 diabetes, might be preferred over the current therapy, sulfonylureas, for this form of diabetes. Sulfonylurea therapy is often associated with the serious side effect of low blood glucose (hypoglycemia).

“The human pancreas from a donor with this type of diabetes has never been studied in this way, and even though this was just one case, we learned so much,” Haliyur said.

But their work is not done, she added. The donor’s pancreatic tissue was “de-identified” as part of standard research procedures, meaning it was linked to clinical data, but identifiers such as a name were not provided. The team, led by Jill Lindner, MEd, and Haliyur, is working with Ellen Wright Clayton, JD, MD, co-founder of the Center for Biomedical Ethics and Society, Vanderbilt’s Institutional Review Board (IRB), the International Institute for the Advancement of Medicine (IIAM) and organ procurement organizations to share their findings with the donor’s family. They plan to recommend that potentially affected family members undergo diagnostic genetic testing for this rare and inherited form of diabetes.