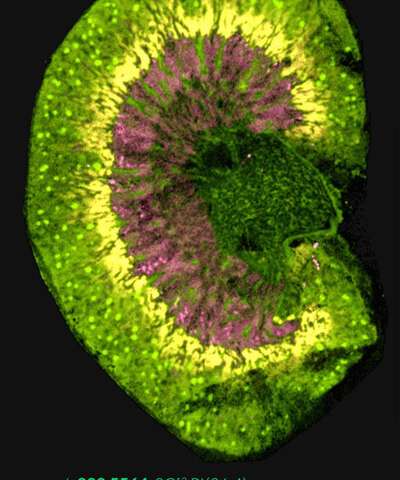 Diabetes is the leading cause of end-stage renal disease, one of the nation’s most debilitating and expensive medical conditions. In 2016 Medicare spent $35 billion caring for more than 725,000 Americans whose kidneys had failed.

Short of mandating universal diabetes treatment, regular exercise and low-calorie diets, little can be done to stem the rising tide of kidney failure—unless scientists can figure out why exactly the kidney’s filtration units, the glomeruli, stop working.

But first they must learn how the normal kidney functions, down to the molecular level. That’s the goal of an audacious project underway at Vanderbilt to create a high-resolution, three-dimensional “atlas” of the human kidney.

“It’s like peeling an onion,” said Richard Caprioli, Ph.D., Stanford Moore Professor of Biochemistry and professor of Chemistry, Medicine and Pharmacology at Vanderbilt. “As you go deeper and deeper, there are more and more layers.”

Together they direct Vanderbilt’s new Biomolecular Multimodal Imaging Center (BIOMIC), a tissue-mapping center in the national Human Biomolecular Atlas Program (HuBMAP) that is supported by the Common Fund of the National Institutes of Health (NIH).

Spraggins, a former Vanderbilt post-doctoral fellow who joined the faculty in 2012, “is doing a terrific job in moving this program forward,” Caprioli said.

Other HuBMAP centers are working on atlases of the breast, colon, lung, ureter and bladder, as well as blood vessels and the immune system.

HuBMAP will be an important step forward in advancing understanding of human biology as well as precision medicine, Caprioli, Spraggins and colleagues around the country reported last month in an update of the program published in the journal Nature.

For its part, Vanderbilt’s multimodal imaging center aims to “fuse” different technologies, including fluorescence microscopy, magnetic resonance imaging (MRI) and IMS, to produce an entirely new view of the kidney.

“The idea is to mathematically put all these technologies together and come out with an image that is the best of all,” Caprioli said. “That’s this fusion idea. It’s fantastic.”

Caprioli’s lab developed IMS in the late 1990s to visualize the location of biomolecules in cells and tissues. Essentially a “molecular microscope,” it measures the distribution, spatial rearrangement and alteration in expression levels of proteins, lipids and other “biomolecules.”

In 2015, Caprioli and his colleagues achieved the first “image fusion” of mass spectrometry and microscopy—a technological tour de force that allowed them to see the molecular make-up of tissues in high resolution.

“Mass Spectrometry is really the only technology that can measure biomolecules … in an untargeted way,” Spraggins said.