Zombie mushroom which kills insects and grows out of their corpses may help cure CANCER, study suggests

Scientists have discovered a way to grow a cancer-healing mushroom in a lab for the first time – in what could be a breakthrough.

Previous research has shown the cordyceps fungus – which kills insects and sprouts from their bodies – can help kill cancer cells.

But due to the mushroom’s rarity in the wild, as well as difficulties cultivating them in the lab, experts have never been able to produce it en masse and test it on patients.

Now, a team from Korea and Egypt have figured out how to grow the elusive fungi using different types of insects as hosts in a controlled setting.

The research team hopes that by successfully cultivating the fungi in the lab in the same manner as it would grow in the wild, scientists will be able to produce the compound cordycepin more effectively and economically for use as a cancer treatment. 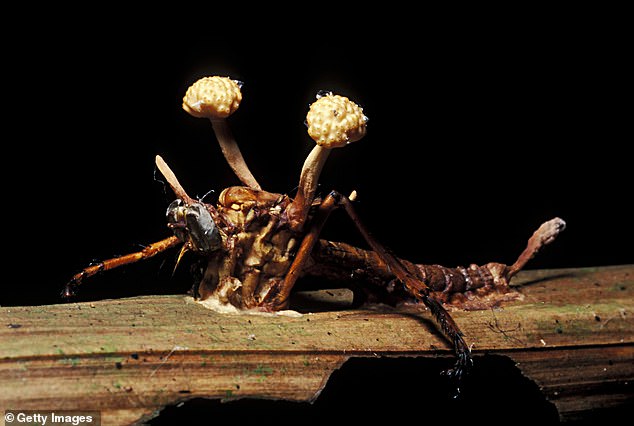 In the wild, cordyceps infect and kill insects. The remains of the insect and fungi are typically hand-collected, dried and used in traditional Chinese medicine to treat inflammatory diseases and fatigue, among other health issues. 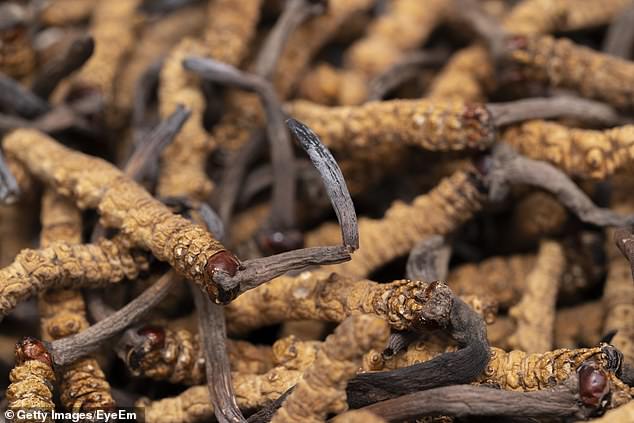 The fungus has proven helpful in killing off cancer cells including those of ovarian cancer, prostate cancer, colorectal cancer, leukemia, and bladder cancer.

The cordyceps mushroom excel at infecting and killing insects. When it infects a host, it invades and eventually replaces the host tissue.

It has become famous for creating ‘zombie’ ants by infecting and growing through the insect’s body, penetrating its muscle cells.

As the infection spreads, the ‘zombie’ ants are compelled to leave their nests in favor of a more humid climate.

Then, they climb up a plant stem and clamp its jaws on the underside of a leaf and wait for death.

Several days after the ant dies, the fungus sends a fruiting body out through the base of the ant’s head, turning its body into a launchpad from which it can spread further.

The family includes 600 different species, some of which have cancer-fighting properties.

Cordyceps have proven to spur apoptosis, or the death of cancer cells, including those of ovarian cancer, prostate cancer, colorectal cancer, leukemia, and bladder cancer.

A 2017 study of cordyceps as a treatment for bladder cancer, for example, found that the fungus induced the carcinoma cell death by activating A3 adenosine receptors, or cell membrane proteins which has been found to be overexpressed in a large number of cancer types.

In a 2005 study investigating the mushroom’s effect on leukemia diagnosis, a team of doctors in Korea found that cancerous cells treated with cordyceps extract inhibited the growth of the cells, slowing the spread.

Meanwhile, another study conducted by Korean researchers in 2013 pointed to the role that cordyceps militaris blocked the growth of prostate carcinoma cells.

What are these killer mushrooms and what are they good for?

Cordyceps are types of parasitic fungus that infect and kill insects

The genus includes 600 different species, some of which have cancer-fighting properties

Cordyceps have shown to kill off many types of carcinoma cells, including those that cause ovarian, prostate, and colorectal cancers, as well as leukemia

Cordyceps are thought to increase the body’s production of the molecule adenosine triphosphate (ATP), an essential compound for delivering energy to the muscles

Cordyceps may also keep blood sugar levels within a healthy range by mimicking the action of insulin and may help treat diabetes.

‘Cordycepin is one of the cytotoxic nucleoside analogs with complementary therapeutic activities in anti-proliferation and anti-metastasis in cancer cells,’ said Dr Mi Kyeong Lee, senior author of the new study investigating ways to cultivate the mushrooms in a lab setting.

Cordyceps are some of the most commonly used ingredients in traditional Chinese medicine for the treatment of inflammatory diseases and cancers.

But only recently has the Western scientific community embarked on research into the fungus’ medicinal properties in human cell studies.

The mushrooms are rare in the wild and cultivating them in the lab on grains such as brown rice has proven challenging.

The level of cordycepin was very low when it was collected from the fungus grown on grains.

It is suspected that the protein content of brown rice grains was not high enough to feed the fungus.

That is why a team of biologists from Korea and Egypt began cultivating the compound on edible insects including crickets, silkworm pupae, mealworms, grasshoppers, white-spotted flower chafer larvae, and Japanese rhinoceros beetles. And certain insects served as better meals for the mushrooms than others.

The cordyceps grew largest on mealworms and silkworm pupae and least well on chafer larvae and grasshoppers. But the largest mushrooms did not necessarily produce the highest concentrations of cordycepin.

The cordyceps grown on the Japanese rhinoceros beetles produced the highest levels of cordycepin, 34 times more than the levels produced on silkworm pupae, which were the poorest performers.

The study out Tuesday is a good first step toward better understanding the fungus’ anti-cancer properties and how to cultivate it more easily, the authors say.

Dr Lee said, ‘The cultivation method of cordyceps suggested in this study will enable the production of cordycepin more effectively and economically.’

‘However, securing edible insects is not yet sufficient for scale-up to industrial level,’ Dr Lee added. ‘It is also thought that more efficient production may be possible through the use of other insects, which needs to be demonstrated by further study.’