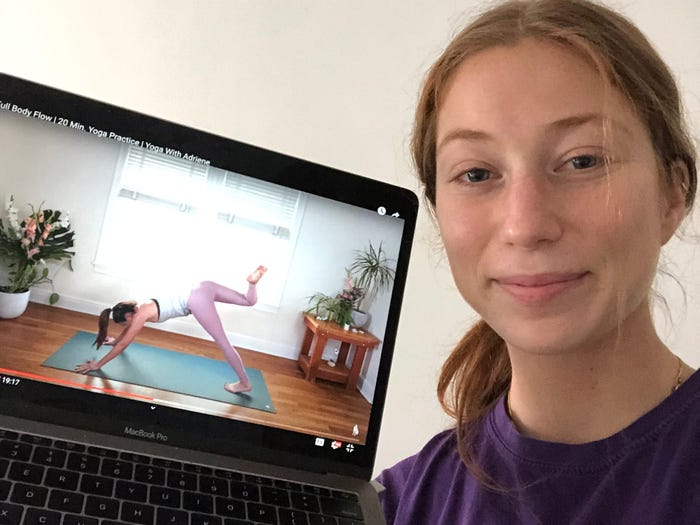 The last time I did yoga I got a nosebleed.

In a dimly lit room filled with steam, I noticed droplets of blood hitting my mat as I folded myself forward. I jolted to my feet and began weaving through sweaty bodies, eventually slipping out of the studio while gripping a white hand towel speckled with blood.

About a week later, on March 15, 2020, that same yoga studio emailed to inform me that all of their New York City locations would be closing until further notice due to the coronavirus. Since March, dozens of yoga studios have closed permanently, from chain locations to smaller, boutique studios, the New York Times reported in September.

The yoga community quickly pivoted, launching a new wave of pandemic yoga. As the Times wrote, "Yoga requires only a clear mind and a few square feet of space, so it is easily converted to remote instruction." Loyal yogis quickly followed along, with Mindbody, a booking software company for the wellness industry, reporting: "Last year, one in five users said they had taken streamed or prerecorded classes, but by this June, more than four of five said they were doing so."

In an effort to fight off digital fatigue earlier this year, I began taking long walks or runs after work instead. But eventually daylight savings time caught up to me, and it was pitch black by the time I logged off each night. Feeling open-minded and even a bit vulnerable as I tried to fend off seasonal depression, I decided to revisit yoga — nosebleeds be damned.

Practicing yoga is reported to have physical and mental health benefits, and I wanted to incorporate these into my work-from-home routine

I decided to commit to 30 minutes every day for a month and landed on an abundance of videos by "Yoga with Adriene," a YouTuber with 8.89 million subscribers, a soothing voice, and an adorable dog named Benji. Amidst an endlessly stressful news cycle, working from home, and plenty of social media distractions, I hoped that returning to yoga would help me regain some peace of mind — all in the comfort of my own home.

At first, I found practicing at home, on my own, much more challenging than attending a class

On day one, Adriene calmly declared that, "All you need is your body and an open mind." But while standing hips-width distance apart with my body hanging heavy, I found my hand reaching towards the space bar to check how much time was left. I was eight minutes into the video.

I found practicing yoga alone much more difficult than in a crowded class. Instead of holding on to every last minute of quiet, I now found myself watching the time slowly creep by. I couldn't get my mind to be present, which made each deep inhale and exhale feel more laborious than I was used to.

For the entire first week, I wrote "YOGA" at the top of my to-do list. My plan was to do 30 minutes during my lunch break, but I found myself slowly pushing it further along each day, sometimes not unrolling my mat until 11 p.m. I became aware of just how lazy my after-work routine had become. Despite how good yoga left me feeling, one of the biggest challenges was disrupting my pre-existing habits and incorporating something new.

Once my body warmed up to practicing daily, I began to notice improvements

By the second week, I finally felt myself adjusting to consistent yoga. The repetition of phrases slowly caught on, allowing me to close my eyes instead of having them glued to the screen. I also started to seek out the surge of energy it left me with, and found myself turning to yoga instead of making an afternoon coffee.

My body even grew sore, warming up to the daily stretches and strains that it hadn't experienced since early March. I wanted to push my body harder and see just how long I could balance on my shaking leg. Challenging myself left me feeling accomplished and refreshed.

But as the adrenaline of the challenge wore off, I felt myself hitting a plateau

Once again, into the third week, I found myself lamenting how slow time was passing. I felt my balance was not improving, the stretches never came easier, and the mounting frustration made it more difficult to commit myself every day.

None of it had to do with Adriene's videos. Adriene — who the New York Times called the "Queen of Pandemic Yoga" — has garnered so much success with her practice because her yoga aims to meet you where you are. She isn't trying to push you to hold a pose past your breaking point or guilt you for skipping a day.

In fact, in one of her videos titled "Yoga To Feel Your Best," I landed on a comment that resonated with me. One user lamented, "I'm very inconsistent with my practice. I somehow get into the mind set that I don't have the time … I have to say, as soon as I step back on the mat, it's like all that negative energy, all those thoughts that keep me from bettering myself … they disappear."

I related to the YouTube user: Why did yoga feel so easy some days, and nearly impossible on others?

By the end of the challenge, I had learned a lesson about exercising intuitively

As I inched towards the fourth and final week, I landed on one of Adriene's videos titled "Yoga For When You Feel Dead Inside," her Halloween special. The description reads: "Some days are harder than others, you feel empty, or overwhelmed, it's difficult, and that is okay. Other days you feel stiff, unmotivated, can't quite get moving, almost frozen… staring out. I have your back."

Paced slower than some of the other videos I had tried, I finally felt like I was relinquishing the high standards I had placed on myself. In the final week, instead of seeking out every fast-paced video on the channel, I leaned into the gentle practices.

In the beginning of the challenge, I was placing pressure on myself to completely relax and walk away feeling recharged, which led to a mixture of guilt and dread on days when I just did not want to do it. But by the end of the challenge, I felt my mind easing up. Some days, I would move through the poses while my thoughts wandered  elsewhere. Other days, the 30 minutes would fly by and I would opt for another 30. I began listening to my body and giving it what it needed.

Yoga began as a mental challenge, but gradually became a tool to nurture myself

After 30 days, yoga taught me a lot about patience. While it was a mental challenge at times to confront how tight my body felt or how stressed my mind was, giving in to yoga became a gentle, approachable method to doing something nurturing for myself.

In the end, yoga did not grant me the mental or physical improvements that I had hoped for. I never noticed my stress levels dramatically decrease. Vast improvements to my physical health, such as my lower back, never came. Instead, yoga taught me how to ease the pressure I place on myself. I learned that working out at my own pace becomes much less of a mental strain, and intuitive exercise is what works best for my body and mind.