A man who went into hospital for knee X-ray got the shock of his life when doctors discovered his penis was turning to bone.

The 63-year-old had taken himself to A&E after he fell over in the street and landed on his behind.

Despite not hitting his head and being able to get up and keep walking without any help, he was worried that his knee had started hurting.

While he was being checked over, doctors X-rayed his pelvis to check there were no broken bones but found something stranger than they’d bargained for.

They told the man that bone cells were forming inside his penis, at which point he got up and left the hospital, ignoring the advice of doctors and never going back. 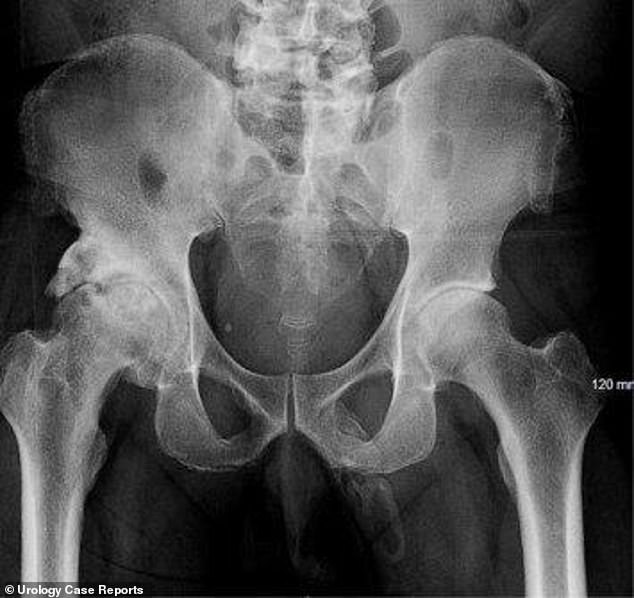 Doctors X-rayed the man’s pelvis to check he hadn’t damaged any bones in the fall and they discovered that bits of bone were showing up in his penis (Pictured: Outlines of the bone formations can be seen pointing downwards from the right hand side of the bottom of the pelvis)

The unidentified man, who walked with a cane, was seen by medics at Lincoln Medical and Mental Health Center in the Bronx area of New York City.

He said that, when he fell over, he fell onto his buttocks and didn’t hit his head or pass out.

And when in the emergency room, besides pain in his knee, he also had some pain in his penis but no other symptoms suggesting an STI, such as discharge or swelling.

Doctors decided to do an X-ray to check he hadn’t broken any bones in the fall but found ‘an extensive, plaque-like calcification along the expected distribution of the penis’.

They diagnosed him with an ossification – essentially a body part slowly turning into bone.

Apparently unhappy with the diagnosis, the man left the hospital and didn’t return for treatment or any investigations to get to the root of the problem.

In a case report the doctors, led by Georges El Hasbani from the American University of Beirut, said the condition is ‘exceedingly rare’.

They said ossification in the penis is normally a consequence of Peyronie’s disease, which causes the sex organ to bend sharply in one direction.

And tissue may turn to bone when calcium salts build up in a specific area over time as a result of conditions such as cancer, thyroid problems or kidney disease.

The team added: ‘We couldn’t assess the [causes] since our patient decided to leave against medical advice.’

The paper was published in the journal Urology Case Reports.

HOW CAN BODY PARTS TURN TO BONE?

Soft tissue in the human body can turn to bone through a process called heterotopic ossification, which means bone developing somewhere it shouldn’t.

The condition happens as a result of calcium salts building up in specific locations over time.

Calcium is carried through the bloodstream and is also found inside cells, meaning it has the potential to build up anywhere in the body.

A build-up can be triggered by the body trying to heal itself after a physical injury like a broken bone.

It may also be caused by various illnesses or disorders, such as:

The condition may be detected by scans such as X-rays or ultrasounds.

Anti-inflammatory drugs can be used to control the condition in its early stages but, if it becomes more advanced, surgery may be required to remove the growth.

Extra bone forming inside the body is fairly common and often happens as a result of orthopaedic surgery.