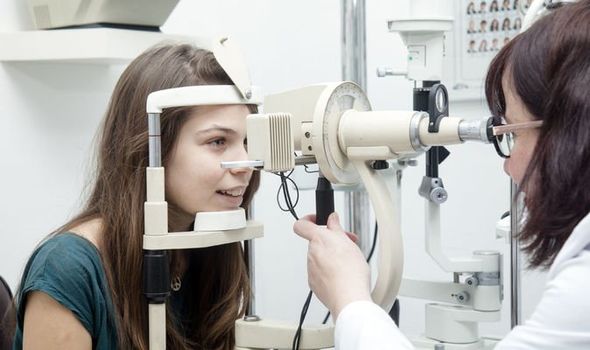 And two thirds of those in need of glasses were diagnosed as being myopic – short-sighted. Eye experts from Scrivens Opticians, which released the data, have warned too much time looking at screens can lead to eye strain. This could cause blurred vision and difficulties in making out objects or words in the distance – such as text on a whiteboard. A study, also commissioned by Scrivens Opticians, found 13- to 16-year-olds typically spend 26 hours a week looking at mobiles, watching TV and playing video games. As a result, optometrists from the leading opticians are calling for more research into the possible long-term impact of screen time on eye health.

Sheena Mangat, Scrivens optometrist, said: “Children’s eyes continue to grow until early adulthood, and their vision is changing too.

“Because conditions such as short- or long-sightedness can happen gradually over time, neither children nor parents can ‘see the signs’, which is why regular eye checks are so important.

“There is more research that needs to be done into why myopia, in particular, is presenting itself in children in such higher numbers, especially when it comes to determining if there is a link to screen-time.

“Trying to encourage children away from their tech to playing outside is not only going to be good for their vision but their overall wellbeing too.”

But 62 percent are adamant “too much” screen time is bad for eye sight, with two thirds attempting to curb screen time as a result.

The Scrivens study, carried out through OnePoll, also found 26 percent of parents have never taken their kids for an eye test.

Despite this, eight in 10 ARE aware their kids qualify for free eye tests, while 78 percent know under 16s are entitled to prescription lenses for free on the NHS.

Sheena Mangat added: “Parents always have a long back to school check list, but getting your children’s eyes tested should be a priority.

“As parents we don’t think twice about taking our kids to the GP should they become ill, or the dentist for regular checks, but arguably an annual eye health examination is just as important.

“For many children they don’t understand what is ‘normal’ when it comes to their vision, so probably won’t know if they are having problems.

“That’s where an eye test will reveal any issues that in most cases can be corrected through prescription glasses or contact lenses.

“Not only will seeing clearly make reading and writing easier but it will help children’s levels of concentration and remember what is being taught in class.

“Being able to detect any issues with sight at this crucial stage of development and education can help to ensure your child doesn’t fall behind.”

Common signs of possible eye sight problems – and the number of parents who have noticed the symptoms in their children:

* Sitting close to the television – 11 percent

* Holding books close to their face when reading – six percent