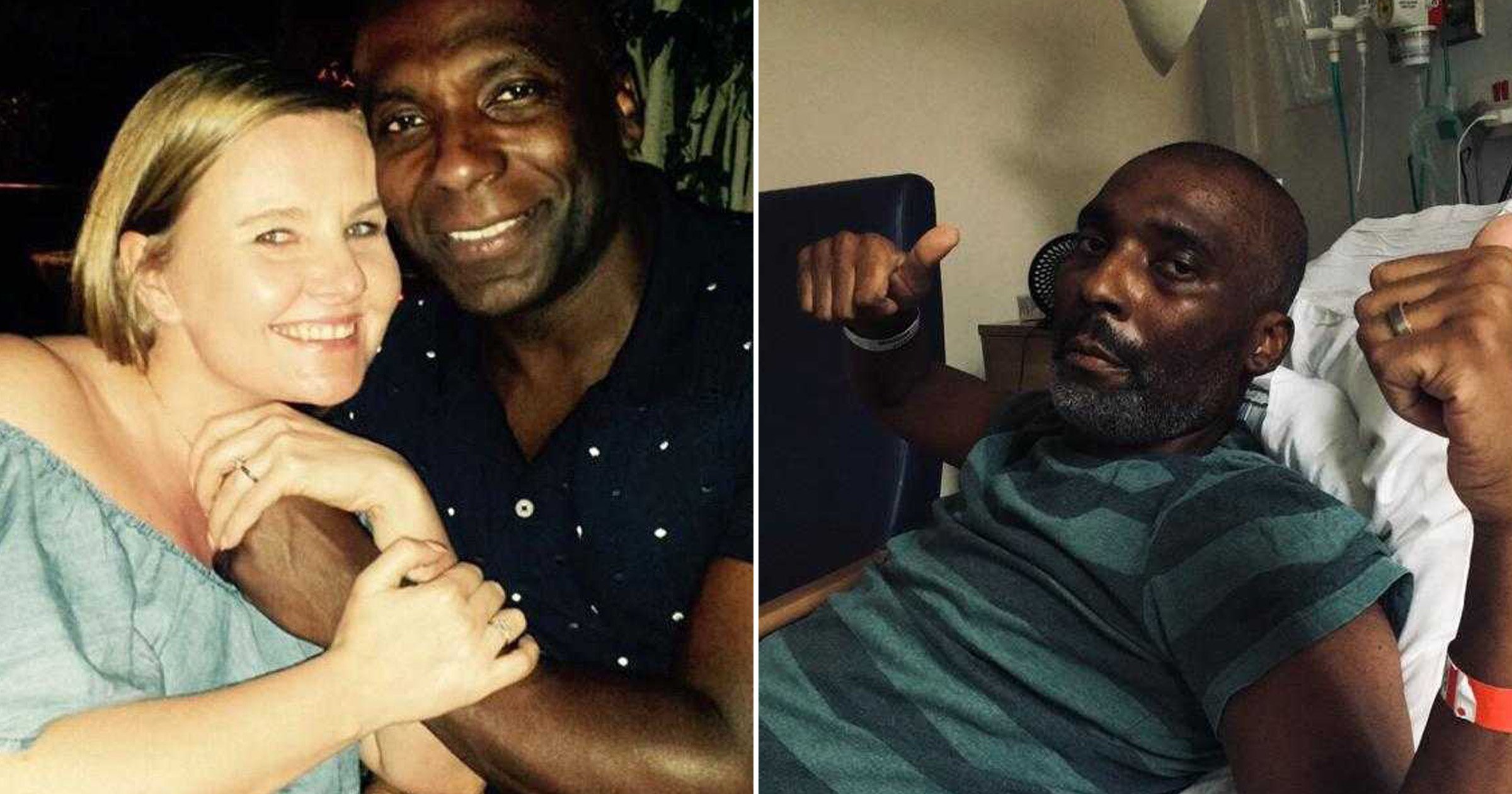 ‘Ricky was just absolutely full of life,’ Nicola tells Metro.co.uk. ‘He was the biggest character and always managed to have fun in every situation.’

However, by the end, Ricky had the life sucked out of him by an incredibly rare and horribly aggressive form of kidney cancer – which doctors struggled to get their heads around.

Nicola Casey lost her husband Ricky, the love of her life, at just 48 years old to a cancer called Renal Medullary Carcinoma (RMC).

He died in her arms on May 1, 2019 after a year-long fight and a desperate search for treatment that would save him.

Now, she is battling for awareness, support and better options for people with rare cancers – the ones you’re not likely to see on TV adverts or prominent fundraising campaigns.

‘People with rare cancers get left behind, they get sidelined,’ says Nicola, from Manchester.

‘It’s just horrendous that people have to go through things like this.

‘The thing that struck me is just how little information or support there is available. The GPs, the doctors, the clinicians, they don’t even know the signs and the symptoms of these conditions.

‘If there was better awareness, then things could be picked up earlier, treated earlier, and Ricky could have had a better chance of surviving.’

Ricky, who worked as fire-fighter at Greater Manchester Fire and Rescue Service for 16 years, first noticed something was wrong when he woke up with an ache in his testicle.

The pain got worse and spread to his abdomen and the left side of his body. Doctors sent him away with antibiotics, but he continued to struggle with pain, and also started losing weight, developed a dry cough and eventually had to stop working because the pain was so bad.

Nicola and Ricky ended up in A&E, but again were sent home. An ultrasound eventually picked up a mass in his left kidney and the lung, and Ricky was initially diagnosed with suspected lymphoma – but doctors weren’t convinced.

During this time, Ricky was deteriorating quickly.

He was losing more weight and the pain was increasing. But the couple couldn’t do anything beyond wait anxiously for the results of multiple tests and biopsies before doctors could even consider starting any treatment.

Ultimately, it was Black doctor who insisted Ricky had a kidney biopsy – and a few weeks later the results came back confirming that he had Renal Medullary Carcinoma (RMC) – a cancer with less than 400 reported cases worldwide to date.

‘If you knew the signs and symptoms to look out for, the first thing you would probably do was a kidney biopsy,’ says Nicola.

But the link between sickle cell trait and this aggressive cancer is rarely talked about.

Nicola and Ricky were told that the cancer was stage four, that it had spread beyond the kidney and doctors didn’t have much hope in treatment being successful.

‘They said we could try chemotherapy to shrink the tumours if we wanted, but surgery wasn’t an option,’ recalls Nicola.

‘In that moment, my reaction was sheer disbelief. He was at work fighting fires just last week. This cannot be happening, it can’t be real.

‘Even though I knew he was really struggling, really poorly, he was still this fighter to me. So I was like – “Well, of course he wants treatment, what do you mean? And what do you mean, you don’t know anything about it?”‘

Over the next few months, the reality of battling an incredibly rare cancer came crashing down on them.

Ricky started chemotherapy and at first, the results were great. The tumours were shrinking. But it wasn’t to last.

In the following cycles, Ricky struggled more with the side effects, and his initial symptoms began to creep back in. The chemotherapy didn’t seem to be as effective.

Doctors at The Christie hospital in Manchester suggested Ricky have a break from treatment to help his body recover, and the couple decided to get married during that time.

‘I remember that the doctors were saying that we must go on honeymoon,’ says Nicola. ‘They were really pushing it, and I was just wondering why they were so keen for us to go.’

Neither Ricky nor Nicola ever wanted to know his prognosis or think about how much time he had left, preferring instead to focus on the positives. Although they found their options were running out.

While on holiday in the Maldives, Ricky began deteriorating again, and when he came back he was admitted to hospital with a form of pneumonia. He came home for two days, but ended up being admitted again, and this time he wouldn’t make it home.

‘He just went from bad to worse,’ says Nicola. ‘His lung collapsed, he was bedridden. He couldn’t do anything, he couldn’t even feed himself.

‘I just never left. I had a camp bed next to him and I just didn’t leave his side for five weeks. He died on May 1. And it was not a very peaceful death, like you might imagine, he was still fighting to the end.’

Now, Nicola is on a mission to try to ensure no one else has to go through the trauma, uncertainty and isolation that she and Ricky experienced while he was unwell.

In 2020, Nicola set up the Ricky Casey Trust in her late husband’s honour. The charity aims to further the understanding of RMC and rare kidney cancers, and to provide support to those who are suffering from these diseases and their families.

‘I couldn’t save Ricky, I couldn’t do anything for him,’ says Nicola, ‘but I know that he would want me to keep fighting and to keep trying to make a difference.

‘If I can help even just one person – then it will be worth it.’

March is Kidney Cancer Awareness Month, and the Ricky Casey Trust is encouraging people to buy a T-shirt and take part in a physical challenge to raise vital funds. You can find out more, sign up for the challenge or donate on their website.

What is RMC – and how does it link to sickle cell?

People with sickle cell trait do not have sickle cell disease, but are at an increased risk of a number of different problems with their kidneys, one of which is the development of RMC.

However, even in patients with known sickle cell trait, the chances of developing RMC remain very rare at around 1 in 30,000.

RMC is more common in male patients (70% male compared to 30% female), and has a much younger age of onset than other types of kidney cancer. The average age of adults affected by RMC in the largest reported series was just 24.