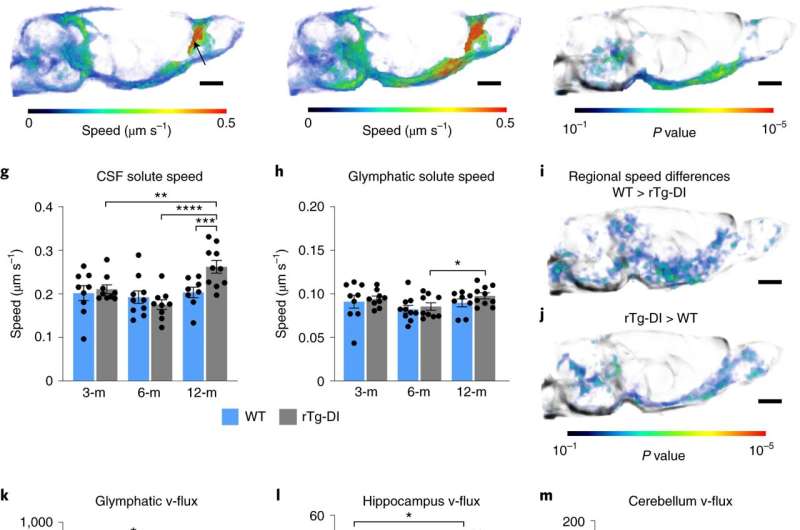 A new study suggests that a contributing factor in dementia may come down to a double dose of bad waste management in the brain.

A research team led by Yale, Stony Brook University, and the University of Rhode Island found that the body’s systems for flushing waste out of the brain failed to work properly when faced with cerebral amyloid angiopathy (CAA), a condition in which the protein amyloid beta builds up in blood vessels in the brain. CAA is a leading cause of brain hemorrhage and is closely associated with Alzheimer’s disease. There is currently no effective treatment for the condition.

Dr. Helene Benveniste, a professor of anesthesiology at Yale School of Medicine and co-senior author of a new study in Nature Aging, says a main culprit in CAA may be an abnormal re-routing of cerebrospinal fluid (CSF) away from the brain’s glymphatic system. CSF normally flushes through the glymphatic system as a handy trash removal service.

Benveniste and her colleagues—including teams led by Allen Tannenbaum at Stony Brook and William Van Nostrand at the University of Rhode Island’s George & Ann Ryan Institute for Neuroscience—developed innovative MRI imaging techniques and computational methods of fluid dynamics to track the glymphatic system in rodents with CAA.

The researchers discovered that when the CAA disease is present, the brain appears to divert most of the waste-removing fluid away from glymphatic cleaning channels.

“When CSF does not go into the glymphatic channels, the brain does not get ‘cleaned,'” Benveniste said. “There is a lot of garbage that will rapidly build up, because fluid is not getting into the right channels to remove waste.”

The cause of this re-routing of the glymphatic system remains a mystery, the researchers said. One possibility might be that inflammation also sets in with CAA and cuts off normal glymphatic pathways in the brain.

But the glymphatic system is not the only waste disposal service in the brain being affected by CAA. The researchers discovered that the lymphatic system—a network of lymph vessels in the membranes covering the brain that drains to the lymph nodes in the neck—may likewise be impaired.

Although lymphatic drainage still occurs with CAA, the researchers found that the drainage is slowed down.

“Both systems, glymphatic and lymphatic, are being affected,” Benveniste said. “It’s not either-or. These systems are in communication with each other and both have to be maintained in order to have a healthy brain.”