A mother’s love can cut obesity risks: Babies whose moms are ‘warm and sensitive’ while playing with their infants are less likely to gain excess weight, study finds

Babies whose mothers are warm and affectionate with them are less at-risk of obesity in their first months of life, a new study finds.

Risk factors for obesity are many, various and come into play before we are even born.

The silver lining to their diffuse nature is that it suggests there are also many ways that obesity risks can be reduced.

Among those risk factors are stress and poverty, so researchers at the University of Buffalo examined whether a mother’s behavior could offset her infant’s obesity risks.

When mothers spoke positively and in warm tones to their babies while while playing, those infants weight-gain patterns indicated they’d be less prone to obesity.

On the contrary, babies whose mothers spoke in harsh tones and behaved with low levels of hostility toward showed signs that they would gain unhealthy weight, the study found. 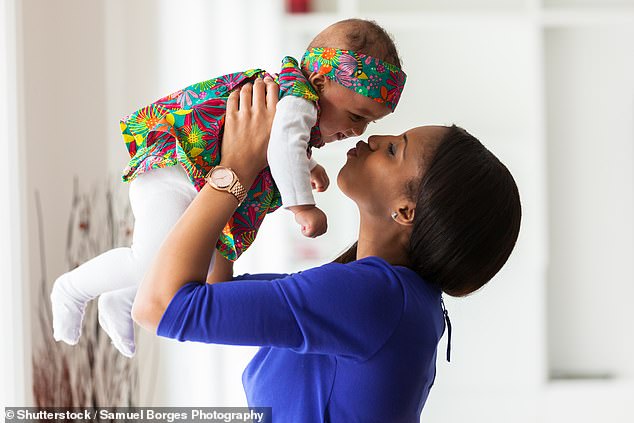 Babies whose mothers are warm and sensitive to them during play time are at lower risks of obesity later in life – offsetting other risk factors like poverty, new research reveals (file)

‘Insults that happen in the womb have lifelong consequences.

‘But despite perturbations in fetal development, our study shows that it is possible to mitigate the effect of these exposures during early childhood by warmth, responsive and sensitive parenting in one’s home environment, especially in active play.’

About 18.5 percent of children in the US are obese, and about 80 percent of obese or overweight children will grow up to be obese adults.

A mother who is overweight or obese during her pregnancy is more likely to have a child who becomes obese, but so can less obvious risk factors, such as smoking during pregnancy (which is also linked to low birth weight) and stress.

In fact, a mother’s low socioeconomic is a strong predictor that her child will grow up to be obese.

But offsetting that risk factor is particularly difficult. For example, better diets in childhood could, in theory, help, but the foods that comprise a healthy diet – whole fruits and vegetables – are more expensive than highly-processed foods that drive obesity.

The University of Buffalo researchers wondered if simpler behavioral differences in parents could have protective effects for infants, even if the family lived in financial stress.

They followed 172 families, all of whom faced many forms of adversity.

University of Buffalo has been studying the children of women who use cocaine, tracking a number of their health and well-being outcomes.

Nearly all of the women, who were predominantly black, used substances during their pregnancy.

Stress continued after the children’s birth too, as 80 percent of the women were receiving government assistance and 85 percent were single – an additional risk factor for children’s poor health in general and obesity in particular.

So the majority of the children involved in the study faced challenges and were growing up in less than ideal circumstance.

But not all of their mothers behaved alike, and that, it turned out, made more difference in their obesity risks than even the mother’s feeding patterns.

‘We wanted to examine if early home environments that promote comfort and pleasurable behaviors that are an alternative to eating can mitigate young children’s food-seeking behavior and thus alter the trajectory of weight gain,’ said Dr Kong.

They watched the mothers playing with their babies for months one through sevenof the infants’ lives, tracking whether the tones the mothers used to speak to he babies were harsh or warm and soft, as well as their postures, physical touches to the babies and any signs of low-level hostility.

Meanwhile, they tracked the BMIs of the babies.

While being fat before age two is not necessarily a sign of an unhealthy child, and pediatricians advise against any calorie restriction before that age, weight-gain that was outpacing length gain did establish a predictive trajectory for the research project.

By the time those same children were seven years old, over 36 percent were obese – about double the national rate.

But the babies whose mothers were warm and affectionate were at lower risks, while the odds were higher that babies would wind up obese kids if their mothers were harsh and hostile.

‘Results from our current study extend this prior work, indicating that such interventions beginning in early infancy and focusing on play interactions may have long lasting impact on obesity risk among high-risk children.’