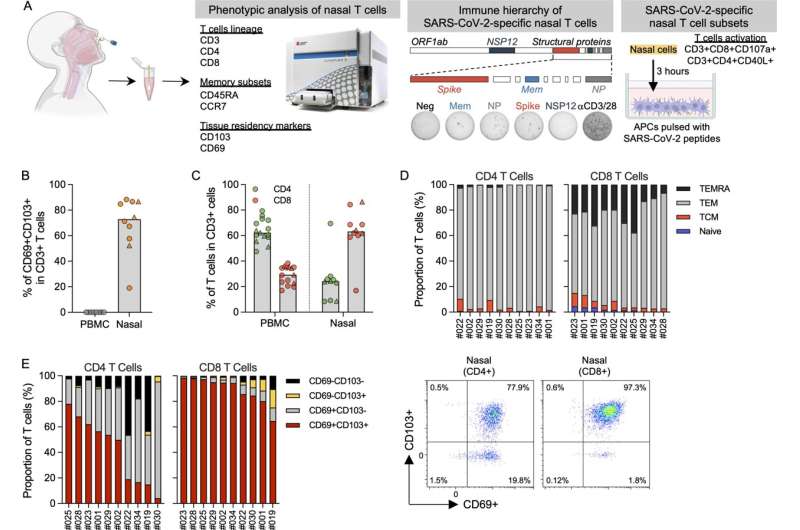 Long-lasting immune cells that specifically recognize the SARS-CoV-2 virus were found in the noses of people who were infected following vaccination. These virus-specific T cells, which were not present in those who had only been vaccinated, are expected to confer an additional layer of protection against COVID-19, according to scientists from Duke-NUS Medical School in Singapore, whose findings were published in the Journal of Experimental Medicine.

Most antiviral immunity studies have been performed with peripheral blood, yet the primary site of SARS-CoV-2 infection is in the nasal cavity.

“Immune cells, called T cells, that live in the nasal cavity and recognize virus-infected nose cells can play an important role in rapidly containing and eliminating infection. However, we don’t know much about the effect of injected vaccines or infection on the induction of these nose-resident, virus-specific cells.”

Prof Bertoletti and his team analyzed the T cells in nasal swab samples taken from 16 people who received two doses of the Pfizer-BioNTech mRNA vaccine but had not yet been infected with SARS-CoV-2. They also analyzed the T cells from nasal samples of another 34 people who had received two or three doses of the same vaccine and were later infected with SARS-CoV-2.

The team examined the T cells to determine the different types and to find out if they could specifically recognize different proteins of SARS-CoV-2.

Interestingly, virus-specific T cells were found almost exclusively in the noses of the group who had received the vaccine and then went on to become infected with the virus. They were not present in the nasal cavities of the group who had only received the vaccine, even though virus-specific T cells could be found in their blood.

“We also found that the T cells in the vaccinated and then infected group persisted for at least 20 weeks and were able to recognize various SARS-CoV-2 proteins, including the non-spike proteins that are more conserved between the different viral variants,” said Ms Joey Lim Ming Er, first author of the study and a Ph.D. student at Duke-NUS. “This is important because it means that these T cells would likely be capable of recognizing cells infected with the Omicron variant of SARS-CoV-2 despite its extensive spike protein mutations.”

Professor Patrick Casey, Senior Vice-Dean for Research at Duke-NUS, says that “as countries around the world, including Singapore, move toward living with the virus, the scientific community must continue to improve and innovate our defenses against the next SARS-CoV-2 variant or other pathogens of public health concern. The findings by Professor Bertoletti and his team highlight an important new avenue of research that could have a major impact on this front.”