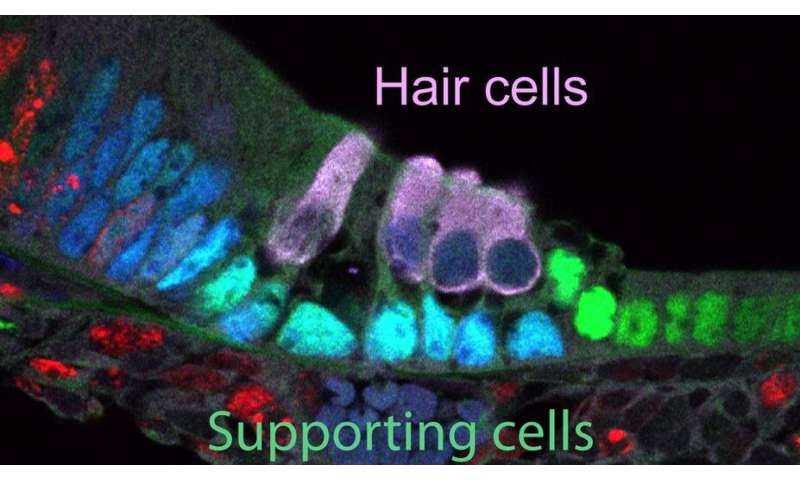 In a study in mice, Johns Hopkins Medicine researchers have found a molecular switch that turns off the animal’s ability to repair damaged cells in the inner ear. The findings shed light on regenerative abilities that are present in many species of birds and fish, but get turned off in mammals, including humans.

The study was published Sept. 8, 2020, in The Proceedings of the National Academy of Sciences.

“We might have for the first time identified something that explains why humans lost the ability to repair cells related to hearing loss,” says Angelika Doetzlhofer, Ph.D., associate professor of neuroscience at the Johns Hopkins University School of Medicine, and co-author of the study.

More than 37 million adults in the United States report hearing loss. In the majority of cases, it results from damage to sound receptor cells deep within the human ear known as hair cells. These cells line the spiral-shaped walls of the cochlea, a bony structure in the inner ear, and capture sound waves reverberating in the area. Then, they convert the vibrations into electrical impulses that are carried to the brain by nerves.

Hair cells are kept healthy by a layer of cells called supporting cells. In birds and fish, supporting cells can function as progenitors to replace lost hair cells. Recent studies of mammals have shown that supporting cells have some regenerative potential early in life, before the animals start hearing. For example, supporting cells in mouse pups are able to create new hair cells at birth. However, the ability to repair or replace them stops within a week. At that point, any damage done to the hair cells is irreversible.

Based on these data from previous mouse studies, Doetzlhofer and study co-author Xiaojun Li, Ph.D., a postdoctoral fellow in her laboratory, looked to the rodents as a way to better understand what controls the decline in regenerative ability in mammals.

The researchers achieved this by following the levels of a protein and micro RNA in mice, called LIN28B and let-7, respectively. LIN28B and let-7 are what scientists call “mutual agonists,”‘ meaning they control each other’s function within the cell.

They found that when let-7 levels ramp up, LIN28B levels drop at the same time, turning off the mouse’s regenerative ability.

The two researchers found that without LIN28B, hair cell regeneration does not occur. They tested this by using cochlear tissue and cells from genetically engineered mice that enabled the protein and its agonistic RNA to be turned on and off as needed.

“The most exciting part was seeing the dramatic effects of manipulating these factors. We began the experiment hoping to get any type of response, and to see a restoration regeneration capability was really thrilling,” says Doetzlhofer.