A good night’s sleep could protect against dementia because the body ‘washes’ toxic proteins out of the brain, study

Scientists have discovered the brain is washed with a cleansing liquid when you sleep – and it could be protective against dementia.

In a study, 13 young people’s brains were studied while they slept, and researchers at Boston University saw something ‘striking’.

Cerebrospinal fluid (CSF) rushed into the brain every 20 seconds or so in pulsing waves.

CSF, a clear liquid also found in the spine, is believed to flush out ‘toxic’ material which is involved in the development of dementia.

For the first time, scientists were able to capture the process in images, and they hope it will pave the way to understanding brain diseases.

It suggests people who get a lot of good quality sleep could protect themselves from cognitive decline, scientists said. 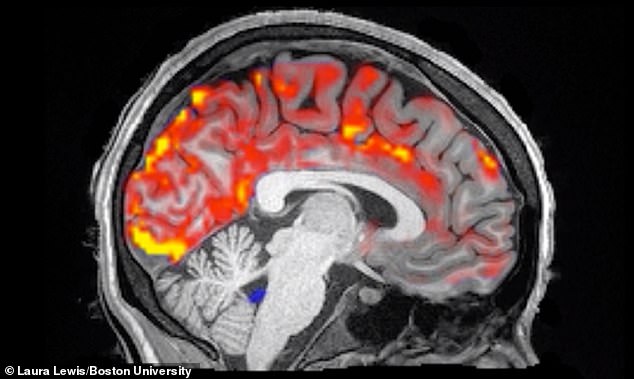 Cerebrospinal fluid (CSF) rushed into the brain of study participants every 20 seconds or so in pulsing waves (pictured). It’s the first time the process has been found and shown in images

Professor Laura Lewis, co-author of the study published in the journal Science, said: ‘It’s such a dramatic effect.

‘[CSF pulsing during sleep] was something we didn’t know happened at all, and now we can just glance at one brain region and immediately have a readout of the brain state someone’s in.’

Researchers studied 13 healthy people aged between 23 and 33 in an MRI scanner as they fell into non-REM sleep.

At the same time, the scientists monitored different sorts of activity in participants’ brains.

By using another form of MRI, the team also measured the movements of CSF in the brain.

WHEN DO HUMAN BRAINS BECOME ‘OLD’?

Cerebrospinal fluid (CSF), which is found in the brain and spinal cord, changes its speed of movement in people older than their mid-20s, a Lancaster University study found.

These movements are linked to breathing and heart rates, with CSF changes previously being associated with conditions such as multiple sclerosis and high blood pressure.

It is unclear if these CSF changes are associated with brain disorders that typically affect the elderly, such as dementia.

Previous research suggests the volume and weight of the brain begins to decline by around five per cent per decade when a person reaches 40 years old.

On the back of these findings, study author Professor Aneta Stefanovska added further research ‘may open up new frontiers in the understanding and diagnosis of various neurodegenerative and ageing-related diseases to improve diagnostic procedures and patient prognosis.’

The discovery came to light during the development of a new method of investigating brain function, which has revealed the stage in life when the brain starts to deteriorate.

Previous research carried out by Imperial College London suggests brains’ grey matter, which enables the organ to function, shrinks during middle age and is related to cell death.

White matter, which enables communication between nerve clusters, also appears to decline at around 40.

This is also when the deterioration of myelin sheath occurs. Myelin sheath is a fatty substances that surrounds nerve cells and ensures proper function of the nervous system.

These changes are thought to occur due to a reduction in the hormones dopamine and serotonin.

Then, CSF rushed in the brain in rhythmic, pulsing waves.

Professor Lewis told Science News: ‘I’ve never had something jump out at me to this degree. It was very striking.’

People with neurodegenerative conditions like Alzheimer’s – the most common form of dementia – have fewer and weaker delta waves.

In turn, this could affect the blood flow in the brain and reduce the pulsing of CSF during sleep.

This could lead to the accumulation of toxic proteins and a decline in memory abilities.

‘We might expect that there are also fewer and smaller waves of cerebrospinal fluid in those disorders, and that might have an impact on how waste products are cleared,’ Professor Lewis said.

Clumps of protein in the brain, called tau tangles and plaques, are believed to play a role in the cause of dementia.

However, it now appears that they are very closely linked. But it is not clear exactly how, yet.

Professor Lewis said: ‘We do see that the neural change always seems to happen first, and then it’s followed by a flow of blood out of the head, and then a wave of CSF into the head.’

One explanation is that the brain cells don’t require as much oxygen during sleep, so blood leaves the area.

As the blood leaves, pressure in the brain drops, and CSF quickly flows in to maintain pressure at a safe level.

The team hope to explore how ageing affects this process, therefore will recruit older participants for another study.

‘We have so many people who are really excited to participate because they want to get paid to sleep,’ Professor Lewis said.

The finding also suggests that people might be able to reduce their risk of dementia by making sure they sleep well, according to Professor William Jagust, University of California, who was not involved in the study.

He told NPR: ‘There are a bunch of things that are probably contributing to people’s likelihood [of] getting Alzheimer’s… and I think sleep is going to turn out to be one of them.’

Sleep and dementia have long been linked, but their interaction isn’t fully understood.

It has become a focus of research, as some studies suggest poor sleep causes or exacerbates dementia, while other scientists say dementia leads to poor sleep.