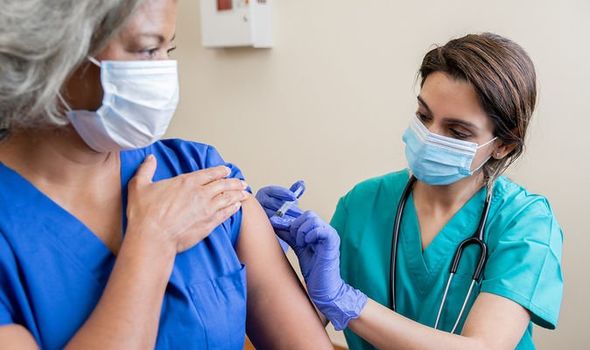 Baroness Altmann, a former pensions minister, will tell Parliament that the care home sector is “edging closer to disaster” as staff numbers fall, and will warn the mandatory vaccination policy could cost thousands of lives.

Last week, Health Secretary Sajid Javid told care home workers: “If you cannot be bothered to go and get vaccinated, then get out and go and get another job.”

Up to 70,000 care home workers are expected to leave as a result of the policy, leading Baroness Altmann to question how the shortfall will be made up. “Care workers aren’t lying around somewhere at the back of a closet,” she said.

Fellow experts condemned the jabs mandate as “another kick in the teeth” for carers already afflicted by low pay and burnout.

There are currently more than 150,000 vacancies in the sector in England, a field which has trad­itionally suffered with staffing problems partly because it competes with the NHS.

Vacancy problems have already been compounded by post-Brexit migration rules, meaning carers from overseas do not reach the new higher income threshold to be ­eligible to work in the UK.

Many carers are switching to the hospitality sector, where a high proportion of workers left after Brexit.

The Government is estimating that between 40,000 to 70,000 of Britain’s 570,000 CQC-registered care home staff will refuse the ­vaccine and will no longer be able to care for residents when the ­mandatory jab policy comes into force on November 11.

And Baroness Altmann, who is due to speak at the second reading of the Health and Social Care bill tomorrow, says that policy will make the situation even worse.

“We seem to be moving ever closer to disaster in the care sector,” she said.

“We’ve had scare story after scare story and we are really no closer to solving the staffing crisis. Without staff we cannot look after people. Care homes have faced years of shortages and inadequate funding. Many are on the brink of bankruptcy and some will close.

“The vaccination policy will lead to tens of thousands more staff ­leaving in an already over-stretched service. How does the Government propose to fill the gap of those who have to leave?

“Care workers aren’t lying around somewhere at the back of a closet.”

The Conservative peer added: “The reality is, if you lose great numbers of staff you will have shortages and this will clearly run risks with people’s lives.

“The Government’s vaccine mandate is a catastrophic policy which could cost thousands of lives.

“This staffing crisis has long been a ticking time bomb and the fuse is shortening, and, unfortunately, the failure to address it will impact on the frailest in our society. The shortage means that we are taking ­catastrophic risks with the most ­vulnerable in society.”

Professor Martin Green, chief executive of Care England, a charity that represents care home owners, predicted that homes would close as a result.

He said: “The vaccine mandate will mean that staff will be forced to get jobs out of the sector and this will increase existing staffing ­shortages. As a result, there will not be a safe level of staff in many places, while others will be forced to close.

“If there is a lack of staff in social care, then Health Secretary Sajid Javid has a problem in the NHS as well, because frail and elderly patients will have nowhere to be discharged.

“With the winter hospital crisis looming due to the huge backlog of elective surgery as well as the increase in hospitalisation due to winter viruses, the trail of this policy will end up on the desk of Mr Javid and hit the NHS.

“We need a systematic approach to social care and realistic funding. While I am supportive of Covid vaccines, staff may have good reason not to get the vaccine.

“People have a right to say no. If the Government decides mandatory vaccination is necessary they need a contingency plan to fill the staff shortfall.”

William Laing, founder and director of LaingBuisson, a social healthcare information firm that provides data for the Government’s Office for National Statistics, said the move comes at the worst time for an over-stretched sector.

He said: “Sajid Javid’s comments are yet another kick in the teeth for those working in the sector who were praised last year for risking their lives and working tirelessly throughout the pandemic.

“People who choose not to take the vaccine are being booted out just at a time when there is a desperate need for staff.

“At the same time, what’s starting to happen now is that care providers serving private payers are increasing their pay rates and passing the extra cost on to their clients.

“But providers serving the public-pay market can’t pay their staff more because they can’t pass the cost on to the cash-strapped public sector commissioners.

“This is going to mean further polarisation of the sector, with publicly funded providers left behind in the competition for good staff.”

He added: “Working in care is a vocation and this policy will mean social care will lose out to not just retail and hospitality but also to the NHS.”

A report released last week by the Health Foundation, a research charity, concluded that up to 627,000 extra social care staff will be needed by 2030/31 to meet demand.

This would represent 53 percent growth over the next decade and four times greater than the increases of the past 10 years.

The foundation also found that an extra 488,000 healthcare staff will be needed to meet demand pressures and recover from the pandemic.

This is a 40 percent increase in the health workforce, double the growth of the past 10 years.

A Department of Health and Social Care spokesman said: “Our message is clear: vaccines save lives. And while staff and residents in care homes have been prioritised and the majority are now vaccinated, it is our responsibility to do everything we can to reduce the risk for vulnerable people.

“Over 90 percent of care home staff have received their first dose of a Covid-19 vaccine.”

The spokesman added: “We are working closely with local authorities and care home providers to ensure there will always be enough staff with the right skills to deliver high-quality care.”

‘This vaccine mandate isn’t taking my disease into consideration’

A sacked care home worker who refused the Covid jab because she suffers an immune disorder has launched an unfair dismissal and discrimination claim.

Her case could pave the way for tens of thousands of other workers who have been told to leave after they have refused the Covid vaccine.

In March, Louise Waite, 52, a former administrator in a college for people with complex mental or physical disabilities, was told by her employers the Covid vaccine was a condition of her employment.

However the mother of three was concerned about the impact of the jab on her body because she suffers from Sjögren’s syndrome, a rare disorder in which the body’s immune system attacks itself, particularly glands that produce tears and saliva as well those that affect the skin, throat, breathing tubes and gut.

Despite sending letters expressing concerns, two weeks ago, Ms Waite, from Preston, Lancashire, was dismissed for gross misconduct failing to have the Covid jab.

She said: “I was concerned about having the vaccine because it hasn’t been tested on people who have Sjögren’s syndrome so I don’t know how it would affect me.

“My doctor confirmed he doesn’t know either. Once I have more information I would feel happier but this vaccine mandate isn’t taking this disease into consideration.”

Her case is one of many being examined by PJH Law Solicitors which has been approached by several hundreds of care workers who are considering action after they were either sacked for gross misconduct, forced to leave or dismissed without notice after they said they did not want to take the vaccine with reasons ranging from ethical, religious to health concerns.

Phil Hyland, solicitor at the firm said: “We do not believe that the government can take away a person’s human and legal right to refuse to have a drug or treatment if they don’t want it.”

He added: “By telling care workers they have to get another job if they do not have the jab, Sajid Javid has also laid himself open for a potential harassment claim under the equalities act.”