The first time I was in an operating theatre, I was not a doctor but a patient. It was, thankfully, for a minor procedure but I can still recall how scared I was. As I lay on the operating table, I looked around at the faces, covered in masks, and the tables of shiny silver instruments. It was a mysterious and daunting place to be. 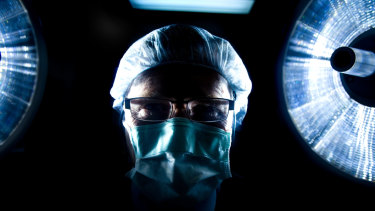 A new website has been set up to compare out-of-pocket costs for medical specialists.Credit:Nic Walker

Now the operating theatre is my second home. It's my workplace. But I don’t ever forget that feeling of curiosity combined with fear. For my patients, that fear can be immense. For most people, what goes on behind the closed doors of a sterile operating theatre – who does what and what is normal – is a mystery. What we see on TV or in movies is subject to massive amounts of dramatic licence, with romance, tantrums and nail-biting suspense punctuating nearly every operation. It’s entertainment.

What really goes on beneath the bright lights in there? What’s okay, and what’s not? What's at stake for patients?

Recently the behaviour of surgeons has been examined in the public eye amid allegations of poor behaviour made against individual surgeons and against the profession at large. The media published stories of bullying, discrimination and sexual harassment. The Royal Australasian College of Surgeons acted strongly, establishing a working committee to investigate just how rotten the core was. Its work showed that 49 per cent of surgeons (including trainees) had experienced bullying, discrimination and sexual harassment.

The statistics were unacceptable and so the college launched its program called Operate With Respect, the key message being that respect for one another is at the heart of patient safety. And it is. A  growing body of research links poor behaviour such as bullying or sexual harassment with a wide range of problems including threats to patient safety. It also creates a horrific environment for people to work in.

The reality is the operating theatre can be an extremely stressful place to work. This is an environment that very few people can comprehend or relate to, even within medicine. It is a place where life can literally hang in the balance.

In those moments, tensions can rise and they are not often moments to politely explain what has to happen. Those moments can be filled with short and pointed dialogue and, while level-headedness prevails, these are the times when music goes off, jovial chatter is suspended and everyone is focused on the task at hand. This is entirely understandable.

What we cannot understand or abide – not the college, not the profession and not the broader society – is bad behaviour. Surgeons can have bad days, but certain behaviours, such as sexual harassment, can never be explained away or tolerated.

It saddens me to see these things reported on so publicly. It is a stress for anyone who is named and shamed. But the actions of a few – and the comments about "narcissists" or cruel behaviour – reflect on the wider profession. It hurts us all.

As a fellow of the College of Surgeons, I am proud of the stance it has taken and what has been achieved to date. For the vast majority of us in healthcare, we are driven to help the people who entrust us with everything. In general we do. We live up to that trust.

So bad is not remotely excusable and we are drawing a line. Not to vilify anybody, but because every health worker needs a safe workplace and every patient deserves to benefit from that.

The author is a surgeon who wishes to remain anonymous.