Chloe Meyers*, 33, spent most of her twenties not wanting to have a family. Focused on pursuing a career as a lawyer, travelling and doing things most 20-year-olds are wont to do, she didn’t think much of starting a family, or her fertility.

Until the breakdown of a long-term relationship forced her hand. 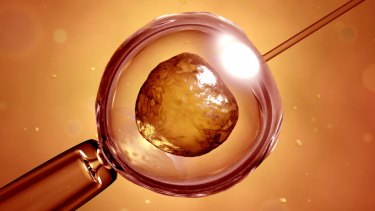 Typically, a woman will need a few cycles of IVF drugs to get as many eggs to come to maturity as possible. To maximise a woman’s chance of success, with Dr Karen Hammarberg recommends up to 20 eggs be stored.

“I got to last year, and things finally clicked that having a family is something I want in the future,” she said.

“My relationship was breaking down, and I realised that even if we did stay together, [the relationship] would be a long way away from being stable enough to start a family. This is when I started to look into egg freezing”.

Ms Meyers is a typical example of a woman seeking to freeze her eggs – in her early 30s, educated and single – but experts fear that the message that egg freezing is viable fertility insurance is overriding the facts: that most women will not actually have a baby from a frozen egg.

While the technology may exist, experts are concerned that quality information about egg freezing is scarce, and at worst, misleading.

In recent years, access to egg freezing has become widely available in high-income nations, and is increasingly marketed as an option to extend fertility.

But while the technology may exist, experts are concerned that quality information about egg freezing is scarce, and at worst, misleading.

Medical Director Monash IVF Group Professor Luk Rombauts says he sees many women in their early 30s who come to him in a panic after receiving low AMH test results, which he says are not often accurate and can lead to disease mongering.

“Being in a panic is not good state of mind to be in to have a constructive discussion about your fertility,” he says. 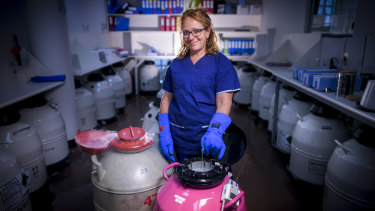 He says that the perception that women put off having children for their careers is often misleading, and that women “just can’t find a partner willing enough to have a family with them”, a conclusion supported by several studies, including a 2017 study (led by Dr Hammarberg) that

When you're young and in a position to have a baby, have the baby, that’s always the safest way.

“I make it very clear that no matter how many eggs you have, it's never a guarantee,” Prof Rombauts says. “As for success rate? It’s usually irrelevant. You have to look at each woman's individual situation.

He says it’s always best to rely on your age.

“When you're young and in a position to have a baby, have the baby – that’s always the safest way,” he says.

Melbourne IVF specialist Dr Kate Stern says we need a sociological shift in the way we present the narrative of women who undergo elective egg freezing.

"Less than 23 per cent of women are doing it, or have delayed being pregnant, for career aspirations," she said. "Presenting the issue along those lines does a lot of harm".

She says companies that offer egg freezing (Google, Apple and Facebook are just a few of the big ones) may not be doing their female employees any favours.

"Some people say it's coercion and others say it's looking after employee reproductive health and wellbeing. And while there is a push in the workplace to look after your employees, encouraging them to delay having children should not be part of that." 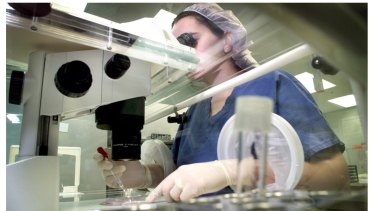 ‘You have to look at each woman’s individual situation’, says Monash IVF’s Professor Luk Rombauts of potential success rates.

Like Drs Rombaut and Hammarberg, she believes that women, men and workplaces should do all they can to help women conceive in the healthiest timeframe.

"Women should be encouraged to maximise their opportunity to have a baby in the healthy reproductive window, in addition to considering options to optimise their fertility later on." 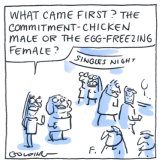 Ms Meyers started her journey with getting the AMH, or “egg timer” test – a blood test used to determine how many eggs you have left – which doctors say is not an accurate indicator of fertility.

After receiving a low reading – “the GP really freaked me out”, says Ms Meyers. She sought advice from a fertility expert, who recommended a re-test after three months being off the pill, which she said can skew the reading.

Ms Meyers will soon undergo the test again, followed by two rounds of IVF treatment, from which she is expected to harvest 12 eggs. One of these, she was told, “might work”.

Clare Verrall, 35, has just begun the process of freezing her eggs. A split from her boyfriend five years ago and a random street attack has made her reluctant to re-enter the dating scene, so she's looking for back-up.

"I initially looked at freezing my eggs when I split with my ex five years ago, but it was just too expensive," she says. 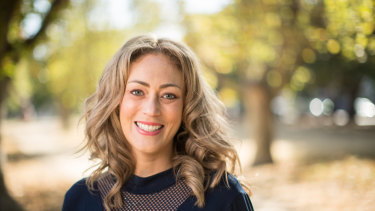 Clare Verrall is undergoing egg freezing. at the age of 35 .Credit:Scott McNaughton

"But then I came across Dr Lynn Burmeister through a friend who conceived after going to her, and saw that her prices were a fraction of the cost of other clinics and that she also offered a payment plan".

Ms Verrall says the cheaper rates, which cost as little at $2500 per cycle, mean that "younger women can get control of their fertility" and not just settle for the man they're with at the time.

"I've seen this among friends: you hit 30, and you start thinking about your fertility. And then you panic and stay with the guy you're with, even though he may not be the right person, just so you can have a family".

Ms Verrall is now taking vitamins and supplements to ready herself for the treatment, and is having her first ultrasound next week, followed by mandatory counselling.

She is documenting her journey on Instagram.  "I really want to be totally open with people about the good, bad and the ugly," she says. "I wish I did this at 30".

The process: what to expect

Egg-freezing is essentially the same as IVF, except instead of the egg being fertilised with sperm, it is frozen in liquid nitrogen for up to 10 years (a limit imposed by the government).

Typically, a woman will need a few cycles to get as many eggs as possible to maximise her chance of success, with Dr Hammarberg recommending up to 20 eggs.

According to Monash IVF, an IVF cycle is one round of IVF treatment starting with the first day of your period. This is also when you’ll start taking fertility-enhancement drugs, usually in the form of injections, which can vary from 1-2 for the cycle, or 1-2 per day, for up to two weeks. Eggs are retrieved and frozen until such time as they are thawed and fertilised in the hope of creating a viable embryo.

The problem here, explains Dr Hammarberg, is that in each of the steps, there is potential for some loss.

“The woman may not respond to the fertility drugs, not enough good quality eggs may be recovered; not every egg will survive the thawing process and the eggs you have left are not all going to fertilise,” she says.

The process is also arduous and hard on the body. Ms Meyers, who is aiming to undergo the first cycle at the end of the year, says she is apprehensive of the fertility injections she will have to perform on herself.

“To be honest, the whole process is scary: giving myself the shots, I don’t know if I can stomach doing that. I also worry that the excess hormones will have an effect,” she says.

Many women are sold the idea that egg freezing is a viable insurance policy – and the way clinics display success rates has a lot to do with this myth.

A 2016 review of IVF clinics in Australia by the Australian Competition and Consumer Commissions (ACC) found that many were misleading in the way they presented people’s chances of having a baby.

The clinics also made success-rate comparisons without adequate disclosure about, or qualifications, of the data or graphics used to make the claim, and used technical terms only understood by industry participants.

Dr Hammarberg says that clinics often provide IVF success rates in confusing ways because there is no agreed format on how this information should be presented.

“Success rates are often quotes as pregnancy per embryo transfer, but in fact, everyone wants a live baby, and quite a few people miscarry,” she says.

VARTA’s audit of the success rates published on Australian and New Zealand IVF clinic websites a few years ago found five key traps many women fall into when researching egg freezing. These include: that clinics measure success differently; that some clinics don’t mention the impact of a woman’s age; scarce information on the impact of general health on IVF treatments; that several cycles may be needed to get the required number of eggs; and the usage of baby images of the websites, making people more susceptible to overestimating the potential of having a baby from treatment.

Rates will vary from clinic to clinic, however, the costs — which include egg freezing and added costs for medication and hospital stay — can start at $8000 and go as high as $15,000, Per cycle.

According to Monash IVF, egg freezing costs approximately $4830, with a further $3000-4000 added on for education and hospital.

And it’s all out of the consumer’s own pocket — unless you can prove there is a medical need for the fertility treatments, such as undergoing chemotherapy for cancer (which can damage fertility or result in early menopause), in which case you may be eligible for a Medicare of private health insurance rebate.

For women who are victims of circumstance or have simply not found the right partner, Prof Rombauts says freezing your eggs is not a “bad option” that can provide a sense of security, something that Ms Meyers agrees with — even after being told she has about an eight per cent chance of success rate.

“While is doesn’t seem great, it's better than having no option,” she says. “I like knowing that even when I choose to be pregnant, I wouldn't be older than 36, my eggs will still act like 32-year-old eggs."