• In his forties, Ben Raue took it upon himself to show how realistic it is to lose weight and build muscle on a vegan diet.
• He combined HIIT and cardio with weight training to build muscle while getting lean.
• Meanwhile, he continued to get all of his necessary protein from food sources like legumes and protein shakes.

Ben Raue wants to save the world. A former “corporate paper-pusher”—his words—from the Chicago suburbs, the 46-year-old has transformed himself into a full-time online plant-based fitness coach. Getting shredded, he figured, would be a good way to prove that a vegan lifestyle is not only better for the environment, but that it could go hand-in-hand with being physically fit.

It all started a year and a half ago, when Raue started reading about how global agriculture affects rainforest destruction and species extinction. Diet choices, he reasoned, affect not just our bodies, but our world. How could he make more people recognize the connection?

He settled on a public, 90-day transformation, one that would show that anyone could go vegan and still be healthy and strong. “I wanted to prove this to myself and show the world what was possible,” he says. “Oh, one more motivator; I was single and I was far from having my A-game on.”

Even as a vegan, getting ripped meant tweaking his diet. “When I started, I would say I was more of a ‘junk food vegan,’” he says—Indian food, Thai food, pasta, and vegan burgers, ice cream, and cookies. “Potato chips and vodka are vegan,” he says. “Vegan doesn’t mean healthy; it just means it’s not made from animal products.”

To get muscle-building protein, he relies on legumes: black and kidney beans, lentils, chickpeas, and edamame. Protein shakes, too. A typical day’s meals might be overnight oats, lentil pasta (about 40-50 grams of protein), and a chocolate-banana-blueberry smoothie. Raue says he averaged 120-140 grams of protein a day.

As he progressed, his workout evolved. His first month, he worked with weights about an hour a day, five or six days a week, hitting each muscle group two days a week, with a day off (or just cardio) in between. He worked his abs three or four times a week. His cardio began as 20 minutes of HIIT (high intensity interval training) three to five days a week; by the end of the month that crept up to 30-40 minutes. “Although I didn’t notice significant improvement the first month,” he says, “I definitely felt strong and more alive.” 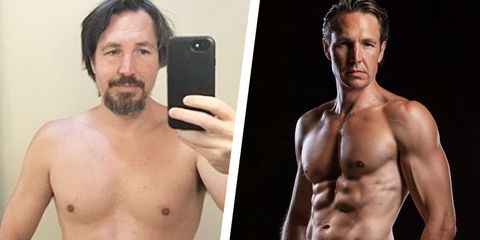 For his second month, he followed a similar routine but stretched workouts to 75 or 90 minutes. He shifted to steady-state cardio, mostly a slow jog, which burned more fat. In the third month he stuck with steady-state cardio—45 minutes a day, six days a week—and 60 to 90 minute weight workouts. “I realize this is beyond what most trainers would recommend,” he says, “but honestly, I felt amazing. I walked out of the gym each day energized and feeling on top of the world.”

His results are hard to argue with: In 12 weeks, he dropped from 18 percent body fat to 10 percent; he estimates he lost 13 pounds of fat and gained 6 pounds of muscle. “What made this transformation different,” he says, “was that I was doing it to show people that you can easily get fit without needing to consume animal products.”