Colton Wright didn’t think he was out of shape. Sure, the 31-year-old software consultant from Austin, Texas, worked a desk job, but he was still active, hiking and hitting the gym regularly. His diet wasn’t great, but he figured he’d offset that with his workouts. When he started getting lower back pain, he brushed it off as what your body feels like after you hit 30. High blood pressure he dismissed as genetic. “I think the scariest part of being at my heaviest, 220 pounds,” he says, “was it felt normal.”

His turning point arrived over the holidays in 2018, when Wright looked at photos of himself in disbelief. It was harder to kid himself that he’d been building muscle when the truth was staring him in the face. He realized that his “healthy” meals, including high-calorie post-workout rewards, had been slowly undermining him.

“I thought to myself, ‘Maybe I just need to track myself better,’” he says. He thought he had the right strategy, even if his execution came up short. He refocused, and three months after the holiday could claim he’d dropped five pounds. That wasn’t much.

“I considered this a small victory,” he says, “but I knew I didn’t really know anything about diet and exercise.” If he wanted to make real progress, he decided, he needed a trainer—someone who could build a personalized regimen.

“I work with a trainer now who’s my biggest supporter and cheerleader through this whole process,” he says. “He’s an expert in diet and exercise, I’m not, and I needed help from someone who knows how to do this and he’s the best.” Now he’s counting macros, eating more vegetables and whole wheat pastas, and has a newfound love affair with sweet potatoes. His workouts are specifically focused on burning fat, with cardio in the morning. 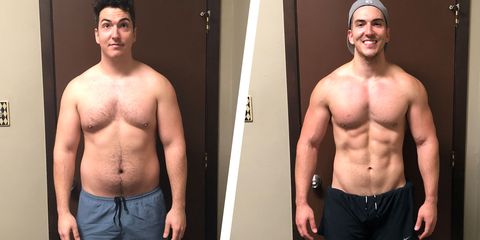 “The biggest hurdle for me in the beginning was changing my mindset of going to the gym and checking it off the list versus going to the gym because it’s become part of my lifestyle,” Wright says. Structure helps keep him motivated. He sets achievable goals and uses progress photos to help him see just how far he’s come. “Change happens so incrementally,” he says, “the photos really tell a good story and kept me on track and provided an added boost of motivation.”

Wright’s proud of how far he’s come: In about five months, he’s lost 37 pounds, dropping from 220 pounds to 183. “I feel incredible as a result,” he says. Now he’s thinking about bulking back up to 200, but with a healthier body fat percentage.

His family and friends have noticed how much he’s changed, too, Wright says, and aren’t shy about voicing their support. “I lost a lot in my face,” he says. “Where the real shock comes from is when we go to the pool and the shirt comes off. That’s where most of the positive affirmation happens!”