Once frostbitten, twice shy! How Harry got a bespoke penis cushion to stop him suffering repeat injury during trip to Antarctica

Prince Harry had a ‘bespoke c*** cushion’ made for a trip to Antarctica in order to protect his South Pole from a second dose of genital frostbite.

The Duke of Sussex was presented with the device by a ‘close mate’ ahead of a 335km charity hike for injured veterans across the frigid continent in 2013.

This close friend sent him the custom made device after Harry revealed he had suffered frostbite of the penis during a similar charity event in Arctic in March 2011. 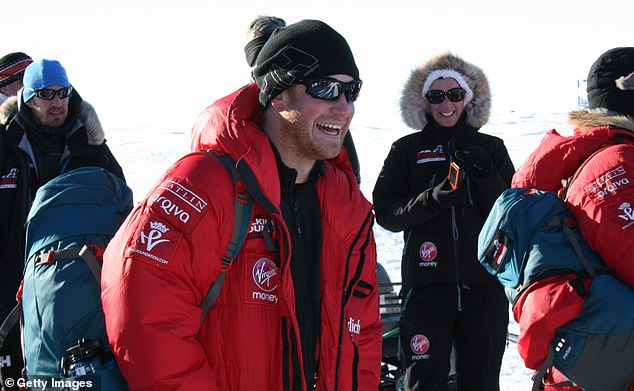 Watch your South Pole Harry! The Duke, pictured here on the charity hike across Antarctica in 2013 has now revealed he packed much ‘snugger’ underwear in a bid to avoid a repeat case of frostbitten penis, as well as custom ‘c*** cushion’ by a close friend 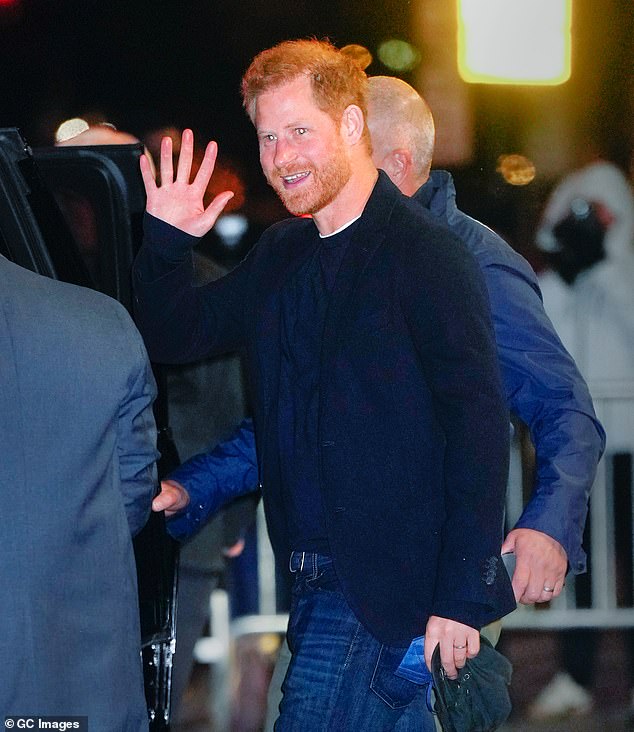 Like other extremities, the outward sticking body parts like the toes and fingers, the penis is vulnerable to frostbite.

However, in most environments and situations, men will generally dress warm enough that this part of the body, which is normally bundled up anyway, should be protected from most temperatures.

It is unclear how effective a bespoke ‘c*** cushion’ would be at offering any further protection than underwear specially designed for hiking or cold weather conditions.

And Dr Richard Viney, a consultant urological surgeon at the Queen Elizabeth Hospital in Birmingham, told MailOnline while it would be ‘reasonable’ to get extra protection if the area had suffered from frostbite previously no ‘specialised devices’ should be needed.

‘It must be said that it’s highly unusual to just get frostbite to this area without getting frostbite to more exposed body parts like nose/ears and toes,’ he said,

‘All that should be necessary are a few extra layers in the immediate vicinity’.

This bizarre admission is just the latest in a string of shocking revelations buried in in his bombshell new memoir ‘Spare’.

Harry had confessed his prior injury, which left the head of the organ extremely raw and sore as it healed, caused him great discomfort during William and Kate’s wedding in April that same year.

In the extract from ‘Spare’ the Duke of Sussex wrote he was keen to avoid a repeat injury for his trek across Antarctica and ensured he had taken extra precautions such as packing better underwear and extra padding.

But, he added that one friend went above and beyond in an attempt to protect his manhood.

‘Better yet, one very close mate hired a seamstress to make me a bespoke c***cushion,’ he said.

‘Square, supportive, it was sewn from pieces of the softest fleece and… Enough said.’

Harry didn’t explain how this close friend acquired the necessary measurements to commission this ‘bespoke’ item.

Nor did he reveal if he actually wore the item during the arduous trip across the South Pole.

The trip saw the Duke of Sussex, as part of team of seven, endure freezing temperatures of -45C (-49F) for about two weeks to reach the geographic South Pole in a bid to raise funds for military charities supporting veterans.

During a similar trip in 2011, this time to the North Pole, had left Harry with frostbite of his cheeks, ears and genitalia, he claimed.

Frostbite can occur anywhere on the body but extremities, including ears, nose, hands and penis, are more vulnerable to exposure.

The condition occurs when skin is exposed to extreme temperatures below zero degrees Celsius.

Normally, the affected area begins to feel cold and painful as blood withdraws from the area to protect internal body temperature.

If exposure to cold continues, the sensation of pins and needles can happen before the area finally numbs over as tissue freezes, damaging it.

In extreme cases the tissue can be lost as a result requiring amputation.

For minor cases, the body heals the damage but this can be very painful as the dead tissue sloughs off, becoming red and raw, and sometimes taking up to six months to fully recover.

While Harry’s frostbitten ears and cheeks swiftly healed, he said he still suffering from his penile injuries during his brother’s wedding.

He also detailed in his memoir that he applied an Elizabeth Arden cream — a favourite of the late Princess Diana — onto his penis after a recommended from a friend.

A beauty world cult staple, the brand’s Eight Hour Skin Protectant cream, one of its best-loved products, is known for its moisturising properties.

It contains a blend of petrolatum and vitamin E, which aims to sooth dry skin.

Harry also said he secretly visited a doctor on the trendy Harley Street, after fearing he may have to undergo a partial penectomy – a removal of part of the penis.

But he was told he just needed time for his organ to heal.

Dr Richard Viney, a consultant urological surgeon at the Queen Elizabeth Hospital in Birmingham, told MailOnline frostbite of the penis was rare but typically only happens when a man urinates in freezing temperatures. 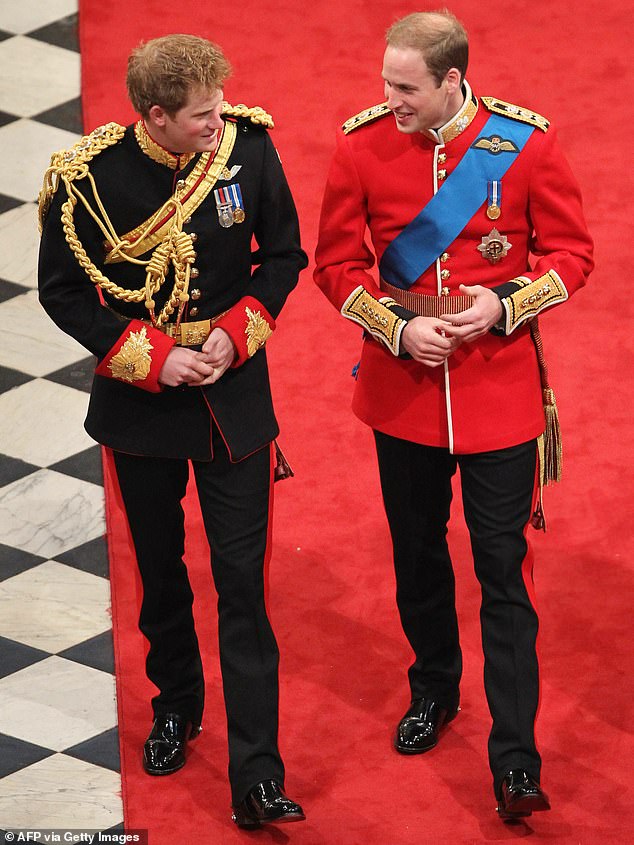 The Duke of Sussex confessed that he suffered from a frostbitten penis during William and Kate’s wedding in April 2011. Pictured above with the Prince of Wales on his wedding day

‘It’s possible for the penis to be effected but this is fairly rare as its central position means it’s usually well protected and insulated,’ he said.

‘When it is pulled out to urinate this will leave it exposed and wet and can lead to frostbite.’

He said that Harry would have suffered direct damage to the head of this penis due to being uncircumcised.

‘Classically, the foreskin gets affected first but in the circumcised male (like Harry) it will be the penile tip that will be affected,’ he said.

‘This would manifest as a painless blackening of the tissues at the tip of the penis.’

Dr Viney added that the process of healing this injury would be painful but shouldn’t carry any ‘significant’ damage or loss of function.

‘When recovery starts, these black tissues will slough away leaving a raw, healthy undersurface that will heal as would a graze,’ he said.

‘Other than some minor aesthetic issues with the glans and some possible narrowing of the meatus (the hole he pees through) there shouldn’t be any significant damage or functional loss.’

He also said the ‘c*** cushion’ wouldn’t be needed provided harry had dressed adequately for the conditions.

‘No specialised devices should be needed. All that should be necessary are a few extra layers in the immediate vicinity.’

Dr Viney said that the best way to avoid a frostbitten penis entirely was to dress warmly in cold environments and not take the organ out of this protection.

‘Keeping oneself warm is key to avoiding a frostbites penis. This involves keeping it well insulated, avoiding the temptation to pull the penis out to urinate if possible and definitely don’t try and give it a rub,’ he said.

The NHS says frostbite sufferers, which usually include climbers, skiers and the homeless, should be taken to warm environments urgently.

Doctors usually warm up the affected areas in warm water, in order to stop the damage.

The earliest stage – called frostnip – which the Duke of Sussex claimed he had, is the easiest to treat.