Bacteria taken from the faeces of healthy people could be used to treat Alzheimer’s, Parkinson’s and cancer, researchers claim.

Scientists have found strains of bugs that reside in the gut that appear to boost the immune system’s response to diseases and infections.

They hope the bacteria could one day replace potent drugs and treatments such as chemotherapy, which can cause a host of unwanted side effects.

British scientists have now started the first trial to test whether taking the bacteria as a daily pill could benefit a range of diseases. 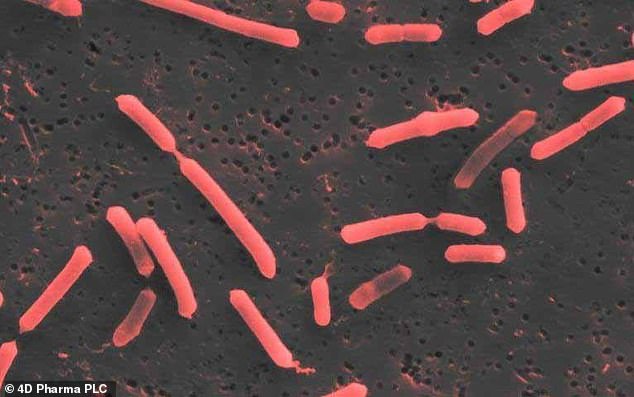 Single strains of bacteria can be used to treat incurable conditions such as Alzheimer’s, Parkinson’s disease and cancer, scientists believe

In the last decade, scientists have found the microbiome has far more influence on overall health than previously thought.

The participants will be given a strain of the bacteria Enterococcus gallinarum, called MRx0518, in the weeks before surgery.

The bacteria is collected from the faeces of healthy people before being isolated and multiplied in a lab.

It is then freeze-dried and given to patients in the form of a daily pill.

The method is different to faecal transplants, where the entire microbiome is transferred to patients.

WHAT ARE THE SIGNS OF AN UNHEALTHY GUT?

1. Constipation – It can cause a build up of waste material and toxins in your system. Straining, hard or painful to pass stools, or not feeling ’empty’ after a bowel movement are all signs of constipation.

2. Diarrhoea – If your stools are too loose and wet, it can be a sign that your gut is not functioning properly.

3. Feeling sluggish – If you’re feeling rundown or tired, it could be because your digestive system isn’t working properly. The digestive system helps to get rid of waste in the body however, if this natural toxin removal process slows down, toxins and waste to build up in the body which can cause you to feel sluggish.

4. Mental health issues – Stress, anxiety and depression might be related to gut bacteria as well. The intestines produce a large portion of the happy hormone serotonin however, lifestyle factors like excess alcohol consumption, change in diet or travel can cause changes to this delicate balance, in turn impacting hormone and neurotransmitter production.

5. Bad breath – Can mean an imbalance of good and bad bacteria in your gut.

After the tumours are removed, researchers will inspect the cancerous tissue to see whether the bacteria boosted the body’s ability to fight the cancer.

Scientists say it is the flagellin – the tail-like structure of the bacteria – is what  triggers the increased immune response.

Duncan Peyton, founder and CEO of British company 4D pharma, which launched the first trial, told The Telegraph: ‘We always thought of bacteria as causing disease.

‘Everyone has had some sort of food poisoning or skin infection but if they can seriously change how we feel for the worse, then clearly they could also have a positive effect.

‘If you have a condition like asthma we want to dampen down the inflammatory effect, whereas in cancer we want to take the brakes off the immune system. And bacteria seem to be able to do that but without the side effects of a lot of drugs, as they are natural.’

In June, six trials across Britain are due to start to find out if the bacteria MRx4DP0004 can help treat asthma.

Worldwide, interest is growing in the idea abnormal quantities of certain bugs may be responsible for triggering a variety of conditions.

Scientists have linked some forms of intestinal bacteria to an increased risk of colorectal cancer.

In two studies by the University of São Paulo (USP) in Brazil, researchers found higher levels of nearly 30 different types of bacteria in patients with the disease compared to healthy individuals.

Some bacteria were commonly found in the mouth while others turned nutrients found in red meat and poultry into carcinogens.

A mother’s bacterial gut make-up may influence her child’s risk of a host of conditions including autism, studies are also beginning to suggest.

This is thought to occur via the ‘gut-brain axis’, which communicates through our nervous, hormonal and immune systems.

It has been suggested an imbalance to an expectant mother’s microbiome may affect her child’s central nervous system, which could lead to autism.

WHAT CAN YOU DO TO IMPROVE GUT BACTERIA?