Grandmother, 50, who thought she was in menopause GIVES BIRTH after discovering at 26 weeks that her ‘aches and pains’ were caused by pregnancy

A 50-year-old mother-of-four and grandmother-of-two who thought she was in menopause has given birth to a surprise baby boy, a report reveals.

Michele Hall and her husband, Jerry, found out in October that she was 26 weeks pregnant – just days from entering the third trimester, with two months until her due date.

The family, based in Naples, Florida was stunned.

Michele hadn’t experienced any significant weight gain, nor did she have the morning sickness she remembers from previous pregnancies.

But, for five months, Michele had endured unusual aches and pains in her abdomen, which she’d dismissed as symptoms of menopause or lupus, an autoimmune disease she has battled since the age of 40.

Eventually, she decided to take a pregnancy test just to put that possible theory to bed – and it came back positive.

On December 27, 2018, Michele and Jerry, Michele’s three kids from a previous marriage, and their 14-year-old daughter Aubrey, welcomed little Grayson at the NCH North Naples Hospital. 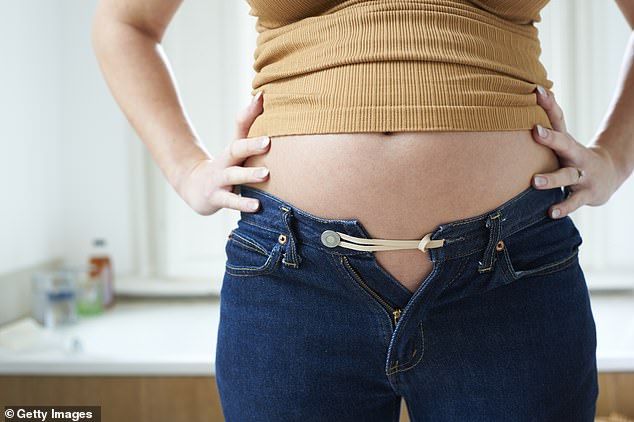 Michele Hall and her husband, Jerry, of Naples, Florida, found out in October that she was 26 weeks pregnant

‘Everyone was in shock,’ Michele told Naples Daily News, which followed her short, intense pregnancy and documented their transition out of the hospital.

‘So in shock,’ daughter Aubrey said.

Michele admitted she had always ‘called bull’ on the TLC show I Didn’t Know I Was Pregnant. Until this happened.

She hadn’t had a period for more than a year, and her doctor declared her safely in the menopause bracket, which can start from about 45 years old.

When a woman enters menopause, she gradually stops menstruating. Eventually, she is no longer fertile.

But an obstetrician at NCH North Naples told Naples Daily News that it looks like, in Michele’s case, ‘she just released that one egg that did it.’

Michele and Jerry said they never even considered terminating the pregnancy, saying Grayson is here ‘by the grace of God’ – though they are ‘100 percent certain’ they aren’t having any more.

Grayson was delivered by scheduled C-section slightly premature at 35 weeks (rather than 40 weeks, which is full gestation) weighing 6 pounds and 19 ounces.

There were concerns about both Grayson’s health and Michele’s, given her age, her lupus and her late discovery of the pregnancy.

The C-section and inducement was recommended to lower the risk of Michele suffering a cardiac arrest or seizures by waiting for the baby.

She got through it fine.

Grayson, at first, had some breathing issues and an episode of sleep apnea, requiring intensive care for 12 days.

He was brought home on January 7, to his woodland-themed nursery, and he is developing well.