The pursuit of happiness, holds the American Constitution, is an unalienable right of all people. What it doesn’t specify is how are we actually meant to do it.

For decades, scientists have tried to answer this question of what, exactly, improves feelings of happiness: what elements in a life could make you feel happier? Here's what the experts tell us: 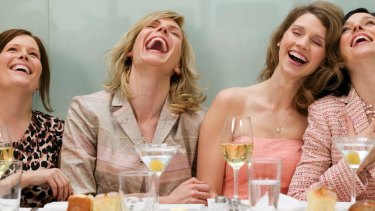 The things you do with friends tend to release happy hormones.Credit:Creatas

Research shows spending time with other people in the flesh (not online) literally improves our sense of wellbeing.

Professor Robin Dunbar from the University of Oxford told The Guardian that “at a psychological level, having friends just makes you happier. The kinds of things you do with other people are very good at triggering the endorphin system, which is part of the brain’s pain-management system.”

Endorphins are opioids which are chemically related to morphine, and which flood our brains when we interact with others, including cuddling and stroking: “It is central to the way primates in general bond in their social groups and relationships,” he said.

The kinds of things you do with other people are very good at triggering the endorphin system, part of the brain’s pain-management system.

The 2018 annual report on adolescents by the Australian Institute of Family Studies also found that the “average resilience scores were … higher for adolescents who had at least one good friend than for those who did not,” says one of the report’s authors, Dr Constantine Gasser.

And while human relationships may be the best form of social interaction, experts say the company of animals should also not be underestimated.

“Animals are a particular kind of relationship: less stressful and demanding – they just like you,” says Dr Janette Young, lecturer in health promotion and policy at the University of South Australia.

“They’re a social lubricant,” Dr Young says. “Animals facilitate connectivity between people and help break down social barriers, especially during dog walks, when people ‘talk’ to the dog but are actually engaging with the person”.

As for social media, it appears that its positives (fostering connections and giving voice to the disenfranchised) may be slowly being overtaken by its negatives (such as cultivating feelings of inadequacy, encouraging addiction, exacerbating cyberbullying, providing easier access to psychologically dangerous content and a decreased attention span).

Social media use has also been linked to rising levels of anxiety and depression the more people use it.

But does it actually make us unhappy? It depends on who you ask, says Nicholas Carah, the University of Queensland’s Associate Professor in the School of Communication and Arts.

“There’s a lot of popular debate about this question. [Some argue] there’s a connection between the rise of the smartphone and a bunch of [negative] changes … in the lives of young people that perhaps in the long term mean we are less happy because we are less resilient.

“Then [others] point to a much more nuanced story, where social media on its own doesn’t make us more or less happy, rather it is the way [platforms] are used, what we use them for,” he says.

Based on his own work (which focuses on how social media platforms are designed to colonise our attention in order to sell it to advertisers), Professor Carah is less forgiving: “These platforms are not designed in the interests of users … which means that they couldn’t care less about what impact they have on user’s wellbeing”.

Another thing we tend to think, often incorrectly, will make us happy is losing weight. In our image-obsessed society, the idea of weight loss has become synonymous with wellbeing, yet experts say there is little to no evidence that losing a small amount of weight – such as 5kg – will actually increase our happiness.

“While there are no studies that directly measure happiness and weight loss, there are reviews that look at losing weight and quality of life,” says Clare Collins, Professor in nutrition and dietetics at the University of Newcastle.

“For example, research looking at overweight and obese adults has found that while weight loss is associated with a better physical quality of life, there was no difference in the mental quality of life.”

Professor Collins says that weight loss only discernibly improves a sense of wellbeing when it is huge: “For example, studies show that people who’ve had bariatric surgery see a much bigger improvement in their quality of life … but there doesn’t seem to be much evidence directly for evidence for small weight loss.”

There is little to no evidence that losing a small amount of weight – such as 5kg – will actually increase our happiness.

What does seem to make us happier is eating better. A 2016 HILDA survey that looked at the food diaries of 12,000 Australians in 2007, 2009 and 2013 found that over that time period, increased fruit and vegetable consumption increased happiness, life satisfaction and wellbeing.

“What this suggests is that losing weight may be too hard a thing to pin your happiness on,” Professor Collins says. “You will get more return on your investment improving your vegetable and fruit intake than just wanting to lose a bit of weight.”

Humans have a peculiar propensity to wrongly predict what will make them happiest.

Despite research showing that materialists tend to be less happy and satisfied with their lives, our consumer society continually strives to reinforce that happiness is rooted in purchasing bigger, better things – which requires earning more money.

“We know that up to a point, earning money does make you happier before it tapers off and even recedes,” says Australian social psychologist Dr Brock Bastian, author of The Other Side of Happiness. “Additional income doesn’t really add much to happiness.”

That said, to judge how much money we need to be happy can also be subjective to each individual: “It's the amount that lets you afford things you feel are necessary for your life," says Dr Bastian.

Yet population studies show that when it comes to money, a significant indicator of happiness is what you choose to spend it on, rather than how much you earn.

“We know that experiences rather than things are more important for happiness, and using money to access enjoyable, valuable experiences is when having money becomes important to happiness,” he says.

This is also echoed in other research, which found that despite people initially predicting experiences to be lower value for money than things, most changed their minds after the fact and realised that doing things – rather than acquiring them – actually made them happier.